Allow me to clarify that. Marriage between two consenting adults is now legal. In writing the court’s majority opinion, Justice Kennedy made clear the court’s limited support for two-person unions:

“The nature of marriage is that, through its enduring bond, two persons together can find other freedoms, such as expression, intimacy, and spirituality.”

“the right to marry is fundamental because it supports a two-person union unlike any other in its importance to the committed individuals.”

“excluding same-sex couples from marriage thus conflicts with a central premise of the right to marry.”

“In forming a marital union, two people become something greater than once they were.”

We get it, liberal justices. No legal right to polygamy under your watch. No slippery slope from gay marriage to marrying your computer, no matter how strong the bond. One union, two people, cake optional. 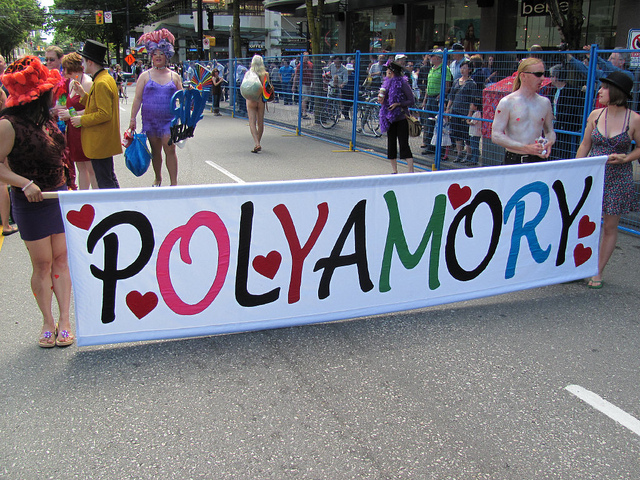 For decades polygamy was the boogeyman conservatives used to scare themselves and closed-minded liberals off gay marriage. If marriage between two men or two women, why not marriage among multiple consenting adult lovers?

“It is striking how much of the majority’s reasoning would apply with equal force to the claim of a fundamental right to plural marriage. If “[t]here is dignity in the bond between two men or two women who seek to marry and in their autonomy to make such profound choices,” why would there be any less dignity in the bond between three people who, in exercising their autonomy, seek to make the profound choice to marry? If a same-sex couple has the constitutional right to marry because their children would otherwise “suffer the stigma of knowing their families are somehow lesser,” why wouldn’t the same reasoning apply to a family of three or more persons raising children? If not having the opportunity to marry “serves to disrespect and subordinate” gay and lesbian couples, why wouldn’t the same “imposition of this disability,” serve to disrespect and subordinate people who find fulfillment in polyamorous relationships?”

Good, progressive questions from a man playing devil’s advocate while inadvertently advancing pro-poly rhetoric that will likely come back to bite him. Dissenting Justices Alito and Scalia asked similar poly-affirming questions during oral arguments in the case.

The fight for LGBTQ+ rights in America is far from over, but after last week’s major win, it’s worth properly reflecting on the important questions Roberts and his fellow dissenters have raised about polygamy (briefly setting aside their fear mongering motives in doing so).

Estimates for the number of polyamorous relationships in America range from 500,000 to 10 million depending on how such relationships are defined. Fear also drives the discrepancy.

I live in South Africa where President Jacob Zuma legally has four wives. I mention Zuma not as a positive example of polygamy in action (…it’s difficult to find anything positive to say about the man…) but to remind readers that poly family configurations do exist and are legally protected in many countries. They’ve also been the bedrock of “traditional marriage,” depending on when we start the clock on that fluid term.

In this 8-minute video, Matt Baume describes how the definition of “traditional marriage” has continually evolved over millennia:

“It wasn’t until 1979 that states got rid of head and master laws which said that a husband can do whatever he wants with his wife’s property. And until 1993 — 1993 — it was legal for a man to rape his wife in some states. If you want to be technical, outlawing spousal rape was a radical redefinition of marriage going back thousands of years. Because remember, marriage is one man and one woman, enslaved, not in love, polygamous, married to a rapist or your brother in law, or never married, with a seven year old girl, beaten as you would a chicken or a pig whenever she’s saucy, barely tolerated with no being or legal existence, and definitely not a different ethnicity.”

So is polygamy passé? The next slide on our slippery slope to damnation? The next rung on our steep climb towards full civil rights and equality in America?

Whatever your take, there’s no denying that last week’s SCOTUS opinions broke our collective silence on poly rights. If Friday’s ruling was about dignity and equality, as Justice Kennedy made clear, we must continue this debate.