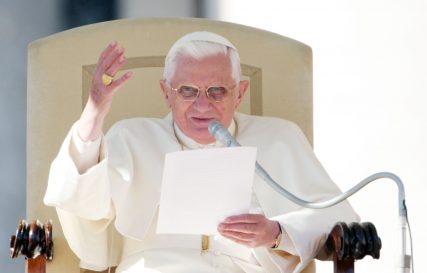 MILWAUKEE (Reuters) The Milwaukee Art Museum says it hopes a portrait of Pope Benedict XVI made of condoms will ignite a conversation about the AIDS epidemic in Africa and the role art plays in public discussions, director Dan Keegan said on Monday.

The museum said that about 200 callers have complained about the portrait. Milwaukee Catholic Archbishop Jerome Listecki called the museum callous and the portrait insulting in a blog last week on the Archdiocese website.

About 17,000 colorful condoms were stitched together to fashion the portrait called “Eggs Benedict,” which the museum plans to put on display in November, museum spokeswoman Vicki Scharfberg said.

Milwaukee artist Niki Johnson has said she made the portrait in response to Pope Benedict’s position against the use of condoms even to combat AIDS in Africa. She completed it two years ago. Benedict later softened his stance, saying condoms were sometimes permissible to stop the epidemic.

The museum said callers supporting the portrait have outnumbered those opposed it its display.

“We look forward to continuing the dialog around this work and the role art plays in society,” Keegan said.

To see a photo of Johnson’s artwork, visit the Milwaukee Journal Sentinel

Reporting By Brendan O’Brien in Milwaukee; Editing by Ken Wills

News
How a podcast is helping this Catholic and gay Latino man break the stigma
Opinion
Making an American saint can take more than a miracle
Signs of the Times
Pope’s new book speaks to Americans on racism, immigration and gender equity
Signs of the Times
McCarrick scandal shows why popes, like John Paul, should not be canonized
News
A blue surprise? As Arizona trends toward Biden, Latino voters stand out