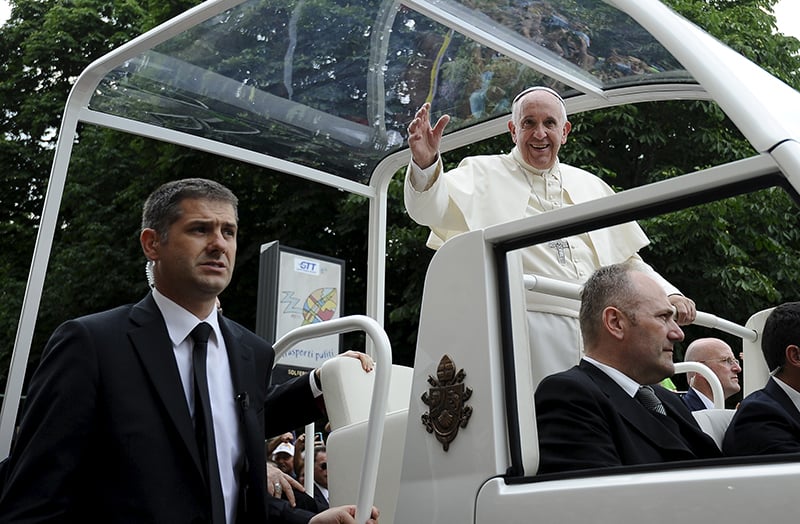 Pope Francis waves as he leaves at the end of a two-day pastoral visit in Turin, Italy, on June 22, 2015. Photo courtesy of REUTERS/Giorgio Perottino
*Editors: This photo may only be republished with RNS-POPE-USTRIP, originally transmitted on June 30, 2015.

(RNS) The Vatican on Tuesday (June 30) released details of Pope Francis’ itinerary for his Sept. 22-27 U.S. visit, his first, and it shows how this “pope of the people” wants to avoid becoming a prisoner of the East Coast “power corridor” during his five days in Washington, New York and Philadelphia.

For example, organizers have added visits to a Catholic Charities food program in downtown Washington, a Catholic school in Harlem that serves largely Latino immigrant children and a prison in Philadelphia to meet with inmates and some of their families.

“Though his trip will include visits among the powerful at the White House, in Congress, and at the United Nations, it’s his other stops that will highlight Francis’ hope to be the leader of ‘a poor church for the poor’,” said Christopher Hale of Catholics in Alliance for the Common Good, a social justice advocacy group.

Another theme that comes through in this first official itinerary is that the Argentine-born pontiff, the first pope from Latin America, will make Latino Catholicism a centerpiece of this visit.

Francis will deliver a total of 18 homilies, talks and addresses (though who knows how many impromptu remarks he will add), and since he is not comfortable in English he is likely to stick to Spanish whenever possible — and the venues and large number of Latino Catholics in the U.S. will help him out.

At a news conference on Tuesday (June 30), Washington Cardinal Donald Wuerl said that a “significant portion” of the approximately 25,000 tickets for the first outdoor public Mass — the Sept. 23 canonization of the Rev. Junipero Serra, an 18th-century Spanish missionary — will be reserved for Latinos.

That’s in addition to the pope’s address in front of Independence Hall on immigration to an audience expected to be made up mainly of Latinos.

“I think this is about more than just making it easier for him to communicate by providing opportunities to speak in Spanish,” said the Rev. Claudio M. Burgaleta, a Cuban-born Jesuit at Fordham University. “I think this is about speaking to and underscoring that the future of U.S. Catholicism is Latino.”

The organizers may also have built in enough time after lunch most days, when the 78-year-old pope usually takes a brief rest, for the “pope of surprises” to do the sort of impromptu things he likes to do when traveling.

“For a Pope who likes to suddenly add stops on the road, mid-day breaks could bring surprises … if Secret Service lets him get away with it,” tweeted Rocco Palmo, a popular Catholic blogger based in Philadelphia.

The effort to recast the visit is not surprising.

When details of the trip emerged last year, there was concern that the program would have the pontiff spending most of his time with political elites in marbled halls: President Obama at the White House, lawmakers on Capitol Hill, diplomats at the U.N. and bishops in the cathedrals of each city.

That would not have been the message that Francis — who wants to lead the church out of its comfort zone and into the margins of society — wanted to send.

He initially hoped to enter the U.S. across the Mexican border to highlight the plight of immigrants. But he said that wasn’t feasible — “Mexico needs a week to visit,” he said in March — so he opted to visit Cuba first, a stop that resonates almost as much.

It was Francis who effectively helped broker the historic breakthrough between Washington and Havana last December, and by retracing the journey of so many exiles he reinforces another key message: reconciliation among peoples, and within societies.

As the Catholic News Service headline on the trip ran: “Pope’s visits to Cuba, U.S. to highlight families, charity, tolerance.”

The most pressing question for most Catholics, of course, is whether and how they can get to see the pope in person.

As always, it’ll be tough, but not impossible. Tickets for the canonization Mass will be distributed through the parishes, but with just 25,000 seats even regular churchgoers will be lucky to score one.

The pope is reportedly hoping to greet — though not bless, organizers say — people gathered on the National Mall after he concludes his visit to Congress. That would be from the same West Front of the Capitol where the presidential inauguration is held.

The events in New York City will also be tight: Unlike his predecessors who visited New York, Francis will not celebrate an outdoor Mass at Yankee Stadium but will do so at Madison Square Garden — a marker locale but a much smaller venue, able to hold just 18,000.

Because the original reason for this visit (planned by Francis’ predecessor, Pope Emeritus Benedict XVI) was to visit Philadelphia for the church’s World Meeting of Families, much of the planning was geared toward making that final stop the biggest public splash.

And it will be. Two outdoor events on the Benjamin Franklin Parkway will reportedly accommodate more than 1 million people. Both will be open to the public, though they may require passes.

And there are always the papal motorcades.

It’s not clear how many such motorcades Vatican and U.S. security will allow, and whether they will persuade the pontiff to use a more secure vehicle — or whether he will simply order the popemobile to stop so he can get out, as he has been known to do.