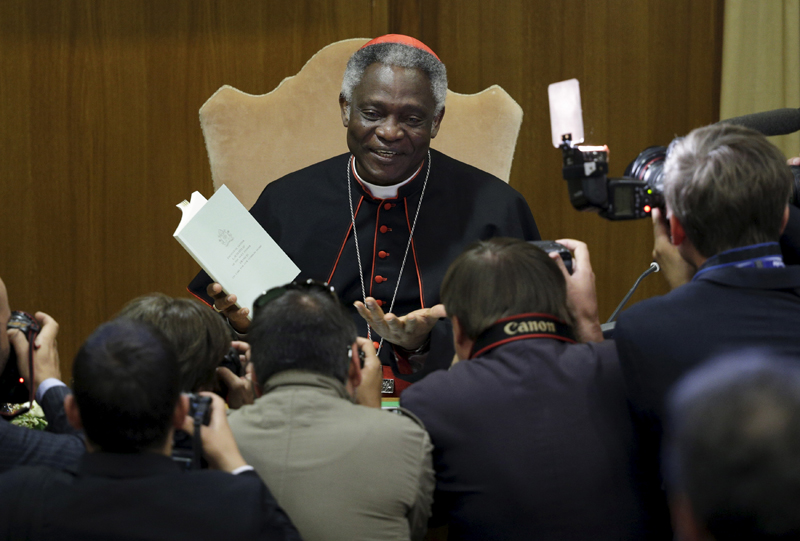 Cardinal Peter Turkson poses as he holds Pope Francis' new encyclical titled "Laudato Si' (Be Praised): On Care of Our Common Home" during the presentation news conference at the Vatican on June 18, 2015. Photo courtesy of REUTERS/Max Rossi
July 5, 2015
Rosie Scammell

Cardinal Peter Turkson poses as he holds Pope Francis' new encyclical titled "Laudato Si' (Be Praised): On Care of Our Common Home" during the presentation news conference at the Vatican on June 18, 2015. Photo courtesy of REUTERS/Max Rossi
*Editors: This photo may only be republished with RNS-TURKSON-ENVIRONMENT, originally transmitted on July 6, 2015.

VATICAN CITY (RNS) The Vatican is calling on bishops globally to act on the pope’s groundbreaking environmental encyclical, Cardinal Peter Turkson said in an interview.

Last week, bishops’ conferences across the world were sent a message urging them to speak up about the message of the papal letter, which called for greater action on the environment, said Turkson, who is president of the Vatican's Pontifical Council for Justice and Peace.

“This encyclical is very unique. It made it clear that it wasn’t just someone in Rome writing for the whole world, but the pope writing together with all bishops' conferences,” the Ghanaian cardinal said, following the end of an early July two-day conference to discuss the implications of the papal letter.

Clerics were sent information on the encyclical ahead of the document’s release last month, to prepare them for the huge global interest it attracted.

Now the Vatican is planning meetings with the world’s major bishops’ conferences, likely after October, to ensure they are successfully acting on the pope’s wishes.

In addition, the Vatican will also continue its engagement with other faiths on environmental issues.

“We need to get to other religions who want to work with us,” he said. “We’ve already been having sessions with some religious leaders; it’s not that we cooked something and now we’re trying to sell it to them!”

Plans are underway at the Vatican to organize a multifaith event on the encyclical in Assisi, the Italian city of St. Francis, although Turkson said the meeting still needs papal approval.

Turkson said it was important for church groups to act on environmental and development plans at a local level.

“Faith-based groups should learn to engage or get involved in the discussion or formulation of projects from the start, so they don’t wait for objectives to be formed and then criticize them. Let’s not be the fire service!”