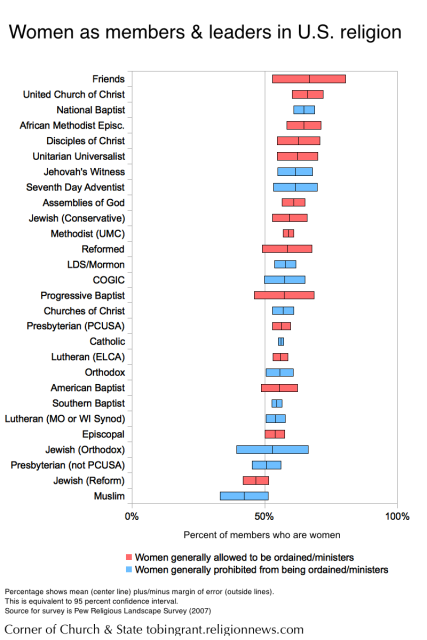 Women, on average, are more religious than men. Yet, two-thirds of religious Americans belong to a community that won’t consider women for leadership positions.

In the graph, I chart out the percent female for American churches, denominations, and religions. Nearly all of them are majority female. The ones that are not are, statistically, evenly split. No group (unless we include atheists, agnostics, and other “nones”) is majority male.

I divide the groups based on whether they generally ordain women as leaders (see note on this below). About half the groups ordain women. Friends (Quakers), Assemblies of God, Methodists, and Disciples of Christ have long had women in leadership. Others began ordaining women in latter half of the 20th Century.

While there are many denominations that ordain women, these denominations include only about a third of religious Americans. Catholics, Southern Baptists (and other baptist associations), most historically black denominations, most evangelical churches, Mormons, Jehovah’s Witnesses, Orthodox Jews, and Muslims do not ordain women.

Note on classifying churches and religious groups on ordination of women

It’s tricky (if not dangerous) to discuss topics such as ordination across religious traditions. Each religious group has its own understanding of leadership, clergy, and ordination. I loosely refer to this as “ordination”, even though some churches refuse to use the term. So, my use of “ordination” is shorthand for a general pattern of allowing women to serve in top leadership roles.