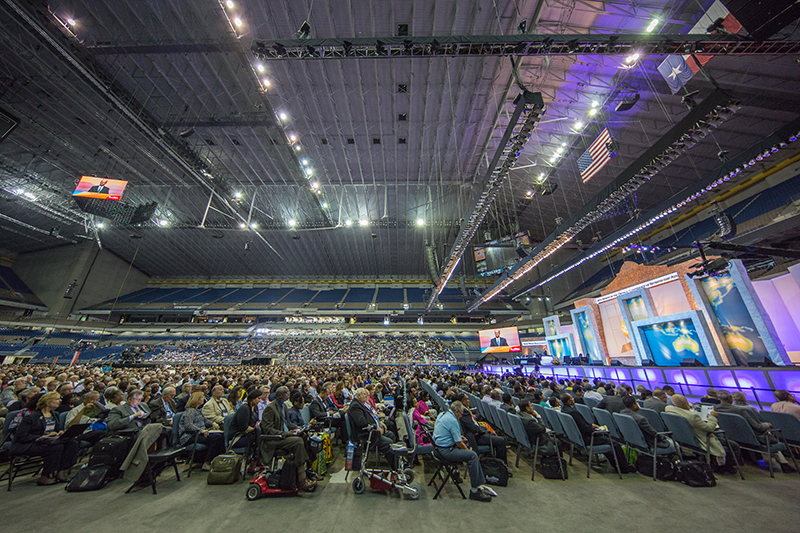 Delegates, their families, special guests and visitors to the 60th General Conference Session begin filling the seats for the much-anticipated discussion on women’s ordination taking place during the morning business session on July 8, 2015. Photo courtesy of James Bokovoy/NAD

The vote at their 60th General Conference Session in San Antonio was 1,381 to 977. It was largely influenced by delegates from Africa and South America who often have more conservative views on women’s ordination than Adventists in other regions.

Tense discussions throughout the afternoon featured dozens of delegates voicing opinions for and against the question: “Is it acceptable for division executive committees, as they may deem it appropriate in their territories, to make provision for the ordination of women to the gospel ministry?”

The vote and discussion, which reflected decades-long division, came a week before the centennial of the death of Ellen White, one of the founders of the denomination, which has 18 million members worldwide.

While many mainline denominations have ordained women for more than 50 years, the Seventh-day Adventists form part of a block of Christian groups that do not. Those include Roman Catholics, Southern Baptists, the Orthodox Church in America and the Church of Jesus Christ of Latter-day Saints.

Despite the ban, several U.S. conferences of Seventh-day Adventists have ordained women in recent years, with at least 19 in the mid-Atlantic region and more than 25 in the Pacific Union Conference by the end of 2013.

The Adventists’ Southeastern California Conference elected a female president in 2013, and several of the church’s 13 worldwide divisions have approved theological reviews suggesting that women’s ordination should be widely accepted.

Women pastors have often held a “commissioned” credential without being formally ordained in the church, which observes its Sabbath on Saturday.

President Ted N.C. Wilson, leader of the worldwide Seventh-day Adventist Church, who sided with a “no” vote and was re-elected to a second five-year term earlier in the meeting, asked for calm before and after the vote.

“We have today a spiritual opportunity to refocus our attention on mission and turn our eyes away from this subject,” he said moments after the vote was announced. “I appeal to all of us in this church to put away differences of opinion. You may guard an opinion but let’s be careful how we express it and move ahead.”

During the debate on Wednesday, former worldwide president Jan Paulsen spoke at a microphone between statements from delegates and stated his support for a “yes” vote.

“Voting ‘no’ will do damage to our church,” warned Paulsen, who was president from 1999 to 2010. “I am fearful of what will happen if we do not allow the church to go forward on this.” 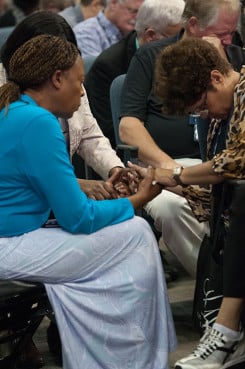 Delegates ask for God’s blessing on the proceedings of the 60th General Conference Session of the Seventh-day Adventist Church in San Antonio. Photo courtesy of Bryant Taylor/NAD

In a “State of the Church” video released shortly after Sandra Roberts was elected president of the California conference, Wilson cautioned against “worldly influences” and “the danger of disunity.”

During the Wednesday afternoon session, dozens of people took turns at microphones to state their views in two-minute speeches before lining up to write their votes on a secret ballot that was placed in one of five clear boxes at the front of the assembly hall in San Antonio’s Alamodome and Convention Center.

“I am a young woman, a young adult, an ethnic minority and a leader of one of the largest youth movements in Adventism,” said Natasha Nebblett, president of Generation of Youth for Christ. “God has already called me to work for him and that is all the calling that I need.”

She was followed immediately by Cheryl Doss, head of the denomination’s Institute of World Mission that trains long-term missionaries sent to assignments worldwide. Doss argued that it was not necessary for the church’s 13 world divisions to operate in the same way, just as body parts do not have the same functions.

“If one part of the body will function better if women are ordained then that is what they should do,” said Doss, a professor of world mission at Andrews University in Berrien Springs, Mich.

In between statements for or against the proposed action, delegates raised questions about how some divisions were being portrayed as proponents or opponents of women’s ordination and noted that there is a debate within as well as among the various regions of the church. More than a hundred others stood in line to speak but time ran out before they could comment.

“Delegates on both sides recognize how divisive and time- and energy-consuming this debate is, but this vote will not settle the question,” said Laura Vance, a sociologist at Warren Wilson College in Asheville, N.C., who has studied women within Adventism and was a visitor at the gathering. “There is so much emotion here today.”

Earlier in the day, the church’s Facebook page for the General Conference Session was filled with comments about how the vote should go, with concern that its outcome could cause division in the worldwide church.

But Garrett Caldwell, spokesman for the worldwide denomination, said current officers are committed to remaining united.

“We’re not concerned about a split,” he said.

Before the vote had been tallied, Caldwell said the status of women who have been ordained by local church bodies despite the church’s official position “will remain the same.”

On Tuesday, Adventists tweaked their Fundamental Beliefs statements, including taking the word “partners” out of its section on “Marriage and the Family.”

The word “partners” is often used by same-sex couples, said Caldwell, and that’s not the meaning Adventists wanted to convey.

“We wanted to make sure we used the language that was very precisely discussing what we mean.”

He said they also clarified the section on “Creation” to refer to a “recent six-day creation,” after some professors at Adventist colleges were “beginning to teach some things contrary to our stated and understood beliefs.”