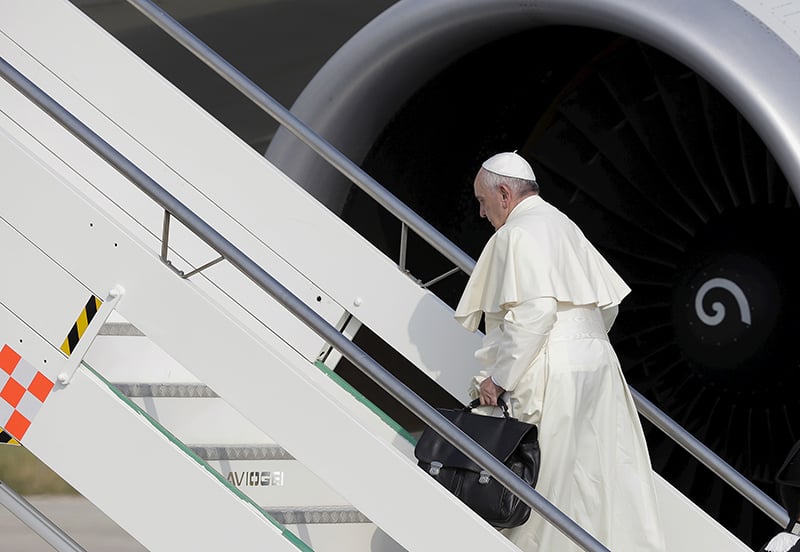 Pope Francis boards a plane for his pastoral trip, at Fiumicino airport in Rome, Italy, on July 5, 2015. Photo courtesy of REUTERS/Max Rossi
*Editors: This photo may only be republished with RNS-POPE-CARBON, originally transmitted on July 9, 2015.

VATICAN CITY (RNS) Pope Francis last month attracted international attention with the release of his environmental encyclical, in which he described climate change as “a global problem with grave implications” that needs to be urgently addressed.

Particular attention was placed on the failings of political leaders and the importance of people changing their lifestyles, making sacrifices to help combat climate change.

Then the pontiff, having become the darling of environmentalists, departed Sunday (July 5) on a whirlwind tour of Latin America. The pope’s journey from Rome to Ecuador, Bolivia and Paraguay will inevitably involve a considerable amount of air travel, known to be a form of transport that is incredibly damaging to the environment.

Francis’ first journey of the trip was a VIP flight from Rome to Quito, the Ecuadorean capital, put on by Alitalia especially for the papal visit. The pope’s Latin America trip will see him travel more than 14,900 miles, mostly by air, creating a large carbon footprint that appears to go against his environmental message.

A quick glance at the pope’s 2015 foreign travel agenda — 11 countries across five continents — and the size of the pontiff’s carbon footprint starts to look quite large.

As explained by James Lees from the U.K.’s Aviation Environment Federation, which campaigns for sustainability in the industry, air travel accounts for about the same amount of emissions as Germany produces as a country. “So for both individual and collective action, aviation has the potential to undo good work to cut emissions elsewhere,” he said.

But Lisa Sideris, director of the Indiana University Consortium for the Study of Religion, Ethics and Society, said the pontiff is just one of a number of climate activists who must travel extensively to achieve their goals.

“On purely utilitarian grounds — judging these actions in terms of their consequences — the pope’s carbon footprint could easily be justified. The good that he does by raising awareness of climate change, particularly given the pope’s great symbolic significance, outweighs the carbon expenditure his travels entail,” she said.

Selling the encyclical in bookstores and broadcasting the pope’s voice from the Vatican is simply not as effective as having him speak in person to crowds around the world.

Francis is already bringing his environmental message to Latin America. On Tuesday, he told an audience that people must no longer turn their backs on “Mother Earth.” Crowds have gathered at every stage of his visit to Ecuador, with nearly a million people showing up for an open-air Mass and hearing his calls for climate-change action.

Aside from the environmental cost of the pope’s air travel, Sideris argued that his broader approach and rejection of consumerism mean he can still be considered a role model. “This pope in particular has a rather modest lifestyle, eschewing the extravagance of many previous popes, so his message carries a certain authenticity,” Sideris said.

Francis set the tone of his papacy by shunning the Vatican palace normally reserved for popes to live in a small apartment within the walls of the city-state. He has urged his followers to create a “poor church,” and last year he fired Germany’s “Bling Bishop,” who had gained notoriety for his lavish lifestyle.

The Vatican’s tough environmental stance preceded Francis’ term. Benedict XVI was nicknamed the “green pope” for vowing in 2007 to make the Holy See the first carbon-neutral country. The plan centered on investing in a Hungarian forest and installing a sea of solar panels on Vatican rooftops, although a Vatican representative contacted by Religion News Service was unavailable to confirm whether Benedict’s aim had been achieved.

The release of Pope Francis’ encyclical has also raised questions about the Vatican’s investment portfolio and whether the city-state has its money tied up with fossil fuel companies. Cardinal Peter Turkson, one of the Catholic Church’s leading voices on the environment, said earlier this month he was unaware of such investments or whether divestment was on the Vatican agenda.

Although the Holy See has gained a positive reputation among environmentalists for a green approach, the effects of air travel cannot be excluded from an individual or country’s concerns about climate change, said Asad Rehman, a senior campaigner for Friends of the Earth, an environmental charity based in London.

“If you break down climate change into the three main areas where we need change — how we produce and consume energy, food and stopping deforestation — air travel is one of the many factors that needs to be dealt with. It’s an essential part,” he said.

While not commenting specifically on the pope’s flying, Rehman said people need to make decisions on whether their flights are really necessary.

While there are few alternatives to essential long-haul journeys, high-speed trains offer a realistic option to reduce harmful emissions. “It’s going to be much more environmentally friendly and it’s better for people’s health in terms of pollution,” he said. Such an approach could be taken for the pope’s short trips, such as his recent journey to Turin, for which he took an hourlong flight across Italy.

Another alternative could be the Vatican’s paying an environmental organization to offset the impact of his flights, such as the Holy See’s plan in Hungary, to balance out its overall emissions.

But Rehman warned against “paying a tax on your sin,” arguing that people’s failure to change their approach would not stop climate change. “It is no longer possible for one person to carry on business as usual, because everyone needs to do everything they can,” he said.