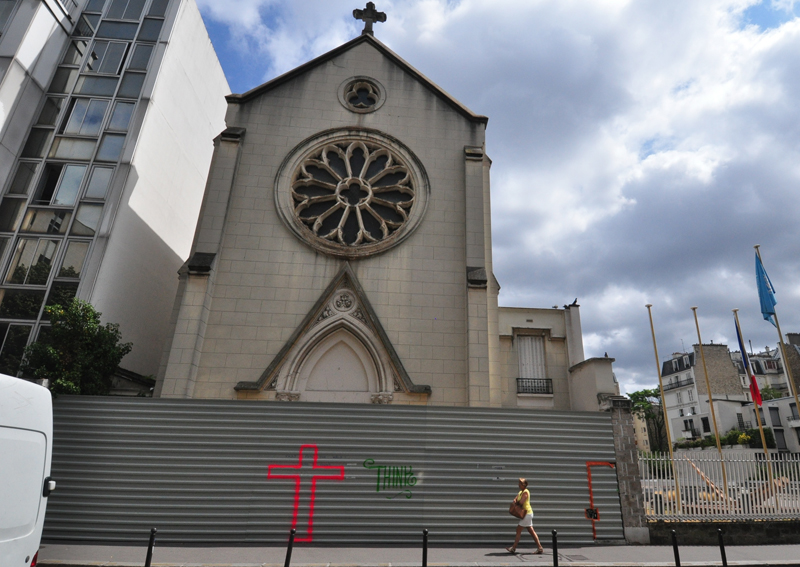 St. Rita’s Church in Paris was shut down recently and awaits demolition. This photo was taken on July 14, 2015. Religion News Service photo by Tom Heneghan

PARIS (RNS) More than 40,000 French have signed a rousing “Hands off my church” petition in recent days denouncing a Muslim leader’s casual remark that some of France’s many empty or underused churches could be turned into much-needed mosques.

The petition, initially signed by 25 conservative politicians and intellectuals, including former French President Nicolas Sarkozy, was launched last week after the head of the Grand Mosque of Paris said that Muslims needed to double the number of mosques around the country to 4,000 and that using empty churches could help them do that.

“Why not? It’s the same God, the rites are like neighbors or brothers. I think that Muslims and Christians can coexist,” Dalil Boubakeur said in a morning radio interview.

That  comment sparked such an uproar that Boubakeur rushed out a statement later that day saying “there is neither a desire nor a willingness to do this now.” Only the Roman Catholic Church, he said, is authorized to speak about the fate of its empty churches.

Despite his quick retreat, the idea of prayers recited in Arabic within walls that for centuries echoed with Latin hit a sore nerve among French conservatives, whose concerns about Islam have mounted since Muslim extremists gunned down 17 people in Paris last January in attacks on the satirical weekly Charlie Hebdo and the kosher supermarket Hyper Cacher.

Those worries are shaping up as a central culture-war issue in the country’s next presidential election. It’s not due until 2017, and mainstream politicians have until now left Muslim-bashing to the far-right National Front.

But the Front’s surge in recent local and regional elections has made it a serious rival and prompted conservatives such as Sarkozy, who hopes to win back the Elysee Palace he lost to Socialist Francois Hollande in 2012, to adopt its hot-button issues such as Islam and immigration.

Valeurs Actuelles, a right-wing newsweekly, got the petition rolling last week with a cover picture of an ancient stone chapel under a headline that translates as “Hands off my church!” Inside, the Catholic writer Denis Tillinac penned a moving appeal to defend France’s religious heritage; an opinion poll showed that 67 percent of the French oppose Boubakeur’s suggestion.

“Certain recent statements calling for churches to be transformed into mosques … deeply offend Catholics, as well as many imams attached to the uniqueness of their faith and ritual practices,” he wrote. “A church is not a mosque, and pretending that ‘the rites are the same’ amounts to a scandalous denial of reality.

“Whether they are believers, agnostics or atheists, the French know by the surest science, that of the heart, that the tens of thousands of steeples sown on our soil by our ancestors’ piety embody the deep memory of our country.”

Many churches in France are empty; opinion polls show that only about 5 percent of the people in the highly secularized country regularly attend them.

The seven-page spread included reports on two transformed churches. One chapel in the Atlantic port of Nantes was turned into a mosque and later torn down to make way for a larger mosque with a 56-foot-high minaret. Another church, in Graulhet, near Toulouse in the southwest, now serves as one of the town’s two mosques.

On its website, Valeurs Actuelles has posted Tillinac’s appeal accompanied by a box titled “I’m signing the appeal to save our churches.” It got 40,000 signatures in the first two days, and the magazine says it’s aiming for 100,000.

That’s a lot of attention for a religious recycling that has only happened three or four times in France, mostly several decades ago, and that no Muslim leader — except Boubakeur in the off-the-cuff remark he quickly withdrew — is seriously proposing. Most Muslims would prefer to build their own mosque rather than refit a rundown church built to Christian specifications and not pointing toward Mecca.

Many of France’s empty churches are in small towns and villages in regions that have lost population to expanding cities. There are usually few Muslims in these areas anyway, so there’s not much demand to turn them into Islamic prayer halls.

In many other European countries, churches and buildings that are in disuse and too costly to maintain are sold off to become bars, restaurants, apartments, bookstores, concert venues, even supermarkets. In France, though, the state owns about 40,000 of the country’s 45,000 churches and chapels and pays for their upkeep as part of the nation’s cultural heritage.

Mayors can cut off the funds if the buildings are no longer used or useful, or tear them down if they fall into serious disrepair. About 25 have been demolished in the past 15 years. Sometimes the Catholic Church gives them up itself, often after shuttering them when it regroups several parishes to deal with the dwindling number of priests.

Offering a solid building to Muslims is something else, however. According to the Valeurs Actuelles poll, 80 percent of supporters of Sarkozy’s party, called The Republicans, and 83 percent of the rival far-right National Front voters are firmly opposed to Boubakeur’s short-lived proposal.

Even 58 percent of voters who support Hollande’s Socialists do not want to see Islamic calligraphy replacing the Stations of the Cross in their village church. So there are large majorities for keeping those familiar churches as monuments to French tradition, even though many have lost their spiritual purpose.

Reacting to the petition, Bishop Michel Dubost, head of the Catholic bishops conference’s interreligious affairs department, said he would prefer that disused churches became mosques rather than restaurants. The best way to defend them from that fate, he remarked, was to attend Mass in them regularly.

The roughly 5,000 churches not owned by the state belong to other faith communities, or were built by the Catholic Church after the 1905 law that separated church and state and confiscated Catholic buildings standing at the time. They have to finance themselves and are subject to the ups and downs of the property market.

One such church in Paris, St. Rita’s, near the Eiffel Tower, belonged to the tiny Gallican Catholic Church and drew regular crowds of traditionalists for its Latin Masses. But rising debts and a looming bill for asbestos removal prompted the Belgian-based association that owns it to decide to tear it down and put up an apartment building instead.

Parishioners tried but failed to raise enough money to save the church, and it is now shuttered, awaiting its demolition.

News
Qatar offers World Cup visitors an introduction to Islam
Follow us on Facebook!
Submit your photos to RNS