Southern Baptists are platforming Jeb Bush and Marco Rubio at their forthcoming mission conference, but in April they disinvited Ben Carson from their pastors’ conference. What gives? – Image courtesy of DonkeyHotey (http://bit.ly/1SGg56k)

When it comes to political partisanship in the 2016 presidential race, it might be said that Southern Baptists have taken one step forward and two steps back.

The Ethics and Religious Liberty Commission, the political arm of the Southern Baptist Convention (SBC), announced in a press release that its president Russell Moore would be interviewing Republican candidates Jeb Bush (live) and Marco Rubio (via video) before 13,000 attendees at the denominations’ missions conference on August 4. Leading candidates from each major party were invited, the release states, but only Rubio and Bush accepted.

But in April, denominational leaders disinvited Republican candidate Ben Carson from speaking at their annual pastor’s conference after a group of young leaders and bloggers decried his invitation. They raised theological concerns because Carson is a Seventh Day Adventist, and said having him speak would send a message of partisanship that could compromise the denomination’s prophetic witness to both parties.

It’s difficult to understand how giving Bush and Rubio a voice at this conference is sufficiently different from allowing Carson to speak at the previous one. The Southern Baptist Convention has been a vocal ally of the Republican party in recent years, and this latest move indicates that they are having a difficult time breaking from their past behavior.

Given Southern Baptists’ strong support of Republican candidates in years past, many were surprised by the criticism to Carson’s invitation this past Spring. The denominations’ gatherings throughout the ‘90s and 2000’s often featured appearances or video messages from Republican politicians and even presidents. But times have changed, and some younger voices in the denomination seem to have less tolerance for using the denomination pulpit for politicking.

“Younger Southern Baptists…are less likely to be enthusiastic about a pastors’ conference lineup that may, in some way, communicate unity around a political platform rather than the gospel of Jesus,” Baptist blogger Trevin Wax wrote after Carson was removed from the program.

Wax added that “Younger Southern Baptists fear that a display of partisanship will sacrifice the meeting’s ability to be a prophetic voice in relation to both parties.”

After it was initially announced that Carson would be speaking, a group of young voices on the “Baptist21” blog led the movement opposing the invitation. They did not mince words: “Our suggestion is that we believe it would be prudent for future SBC leaders to stop inviting politicians to our meetings. Period.”

But were they really offering a period or was it more of an asterisk? Those bloggers have remained mum following the latest announcement that Moore, a figure these young Baptists consistently celebrate, would be doing the very thing they claimed would “mute our voice in this culture” and compromise their ability to “keep a prophetic voice with both parties.” (Despite the unequivocal stance on the matter in their original post — no politicians at our meetings…period — the “Baptist21” bloggers will only say they “aren’t as concerned” about the upcoming forum.)

In conversations with multiple denominational employees, all said they felt varying degrees of discomfort with the decision to host Bush and Rubio but cited an unspoken policy against criticizing other denominational agencies and declined to comment publicly. 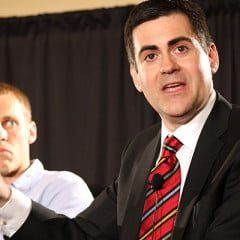 Moore told me he believes the upcoming forum is unlike the Carson situation because Bush and Rubio are participating in a dialogue and will not be preaching sermons: “What we’re doing at [the missions conference] is quite different. We’re having a conversation with people and not treating them as spiritual leaders. We’re instead treating them as what they are–people who are running to lead the country.”

The invitation seems to be somewhat at odds with Moore’s own thinking of late. Many have noted that he has sought to move the organization in a less partisan direction. In his forthcoming book, “Onward: Engaging the Culture Without Losing the Gospel,” Moore even calls Christians away from thinking of the culture wars “mostly in terms of the ballot box, of red states and blue states, Republicans versus Democrats, conservatives versus liberals.” He calls readers away from the “Moral Majority” mindset to a “prophetic minority” framework that means, in part, remaining “prophetically distant, in that we don’t become court chaplains for anybody’s political or economic faction.”

Moore says he does not believe the upcoming forum will send a partisan message. He points out that Hillary Clinton was also invited but declined to participate.

But this doesn’t change the fact that the forum as it stands will platform only Republicans. And it still fails to explain how a denominational event with Bush and Rubio avoids the pitfalls previously identified with Carson. There is no difference from a partisan standpoint as all three men are seeking the GOP nomination. The only difference is that Rubio and Bush are polling much higher than Carson and are more likely to become powerful political allies for Southern Baptists in the days ahead.

Many claimed that Carson was too different from Southern Baptists theologically. But unlike Carson, Bush and Rubio aren’t even Protestant; they are Catholic. (Rubio is also an erstwhile Mormon but has been seen attending a Southern Baptist mega-church in recent years.) Roman Catholics emphasize the role of works in attaining salvation, pray to Jesus’ mother, Mary, and believe in papal infallibility. Baptists consider these doctrines some form of heresy. If being vegetarian and attending church on Saturdays as Seventh Day Adventists do is a bridge too far for Baptists, how can holding these doctrines be A-Okay?

Given the moment in which America finds herself, one unspoken risk in this decision is the racial subplot in the story. The only Republican who got the boot from Southern Baptists also happens to be the only black candidate in the race. It’s highly unlikely that race was an issue in this discussion—Moore took heat from some fellow conservatives recently for publicly opposing flying the Confederate flag in South Carolina—but critics will be excused for seeing race as one of the only elements separating Carson from Bush and Rubio.

A narrative about inherent racism is one of the last things the denomination needs right now, but it is one that has followed them through their history. The SBC was founded on the desire to send slaveowners to the mission field. They were vocal supporters of Jim Crow laws and segregation in schools in the mid-20th century. While the denomination publicly apologized for it racist past in 1995 and elected an African-American pastor to lead them in 2012 (beating even the progressive Episopalians to the punch), their history plagues them even until today. Moore’s predecessor, Richard Land, was ultimately ousted from his post for comments on the Trayvon Martin case that were widely considered to be racist.

In sum, this decision is all kinds of bad for Southern Baptists. It plays into the narrative that they are a handmaiden for the Republican party, sends confusing messages about what they consider to be theologically significant, and invites charges of racial discrimination from their fiercest critics.

Many Americans would like to see a less partisan voice develop among Southern Baptists, but they better not hold their breath. When it comes to America’s largest Protestant denomination, the more things change, the more they stay the same.