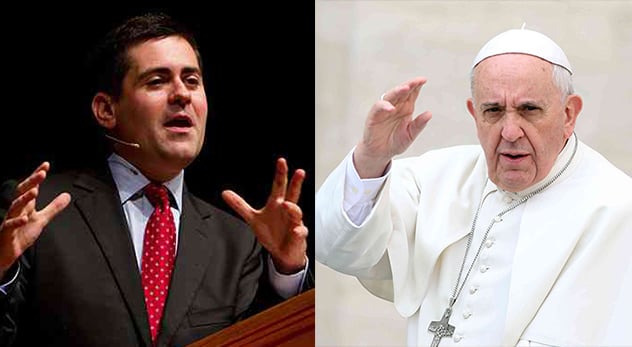 Both are powerful, fresh-faced religious leaders of massive conservative Christian bodies whose behaviors and statements excite, infuriate, and confuse both conservatives and progressives by turns. Are they paving the way for a future expression of faith that we’ve only begun to imagine?

Imagine for a moment a powerful, but fresh-faced, religious leader of a large conservative Christian body whose behavior and statements excite, infuriate, and confuse both conservatives and progressives by turns. You have just envisioned Pope Francis. You have also just imagined Russell Moore, president of the Ethics and Religious Liberty Commission of the Southern Baptist Convention.

Both men assumed their posts atop America’s leading Christian denominations in 2013 at a time when their respective organizations were attempting to overcome tarnished public images. Southern Baptists—America’s largest Protestant group—had been long criticized for their political alignment with the Republican Party and predominately white membership. Their message had grown stale, if not desperate in tone, and they were beginning to decline in numbers. Roman Catholics—America’s largest religious group of any kind—were suffering from clergy sex abuse scandals and their failure to deal swiftly with offenders, as well as the lavish lifestyles of many of their priests and bishops.

The election of each leader brought a promising shift in tone and the hope of revitalization. The Pope sought to exert a more winsome witness on homosexuality in 2013. When asked about LGBT people in the church, the Pope avoided condemning them as “disordered” like previous Popes and instead asked, “Who am I to judge?” Moore has also been more careful in dealing with sexuality issues by denouncing ex-gay therapy and urging Christian parents not to disown their LGBT children.

Both men have also poked another sacred cow for conservatives: environmentalism. Pope Francis chose creation care as the subject of his recent encyclical, calling Christians to take responsibility for caring for the earth and mitigating human-caused climate change. Moore also believes humans are partly responsible for climate change and argued that the BP oil spill and other environmental problems were moral issues and the result of human sin.

But sexuality and environmentalism are only two examples in a list of issues where these two leaders have attempted to plow new ground. Francis has placed a renewed emphasis on the poor and advocated for greater transparency and accountability among church leaders. Moore has focused on the need to decouple the denomination from the GOP and to broaden Baptists’ cultural engagement beyond the political sphere. Pope Francis’ comments on marital separation and the value of women in the church have given many people hope that while Catholics are not adopting a new theology, the church may be softening some of its sharper theological edges. Moore’s comments opposing the Confederate flag and supporting immigrant families in America have had a similar effect.

BONUS INTERVIEW: “Russell Moore on moral decline, Franklin Graham and why he started out as a Democrat”

Somewhat serendipitously, both Russell Moore and Pope Francis have published their first books since assuming their positions in the last month, and both focus on the role of Christians in the world. The Pope’s Laudato Si: On Care for Our Common Home is drawn from his environmental encyclical, and Moore’s book, Onward: Engaging the Culture without Losing the Gospel, is a manifesto for Christian cultural engagement. Both books strike a tone that is markedly different from their predecessors.

These trends have led some to conclude that Francis and Moore may be the face of conservative Christianity’s future. But I wonder if they are transitional forms instead,  bridges between what was and what will one day be. Bridges, by definition, get walked on from both sides. And this has certainly been true for both of these leaders, who have often been forced to perform something like a balancing act.

After conservatives criticized the Pope’s unwillingness to “judge” LGBT people, Francis and his communications staff made clear that the church’s position had not changed. After some conservative Catholics in America were angered at the Pope’s positions on environmentalism and gun control, the Pope promised to listen to his critics. Moore rankled conservatives with his call for a “pullback from politics, culture wars” in a Wall Street Journal article; he subsequently downplayed the article and his comments. And his decision to interview Republican candidates at an upcoming missions conference has some more moderate voices wondering if he’s reverting back to the partisan kingmaker tactics of the religious right. Moore’s denunciation of ex-gay therapy made many of Moore’s conservative constituents squirm. So he has worked to shore up his base in other ways, for example, supporting RFRA laws to protect Christian business owners who don’t wish to serve LGBT couples seeking to wed.

In the end, both Pope Francis and Russell Moore are not just similar leaders. They are metaphors, if not emblems, of the moment that conservative Christianity itself is in. A moment in which they are renegotiating their witness in a world that is more skeptical of institutional religion than it once was. A moment in which our biggest current challenges–race, sexuality, gender, and environmentalism–require more nuanced thinking than conservative Christianity has previously offered. As the world evolves, the leaders and followers of its greatest faiths must also change.

Despite creating splashes in the media and talking a big game, neither Moore nor the Pope has really changed their respective organization in any substantive way. So while they may be curious, fascinating, and strikingly similar, the more interesting question is how these men are paving the way for future expressions of faith that we’ve only begun to imagine.