Moore, who serves as president of the Southern Baptists’ Ethics and Religious Liberty Commission, spoke to a group of journalists Tuesday (Oct. 28) covering the group’s national conference.

“The utopian idea if you come to Christ and if you go through our program, you’re going to be immediately set free from attraction or anything you’re struggling with, I don’t think that’s a Christian idea,” Moore told journalists. “Faithfulness to Christ means obedience to Christ. It does not necessarily mean that someone’s attractions are going to change.”

Moore said evangelicals had an “inadequate view” of what same-sex attraction looks like. 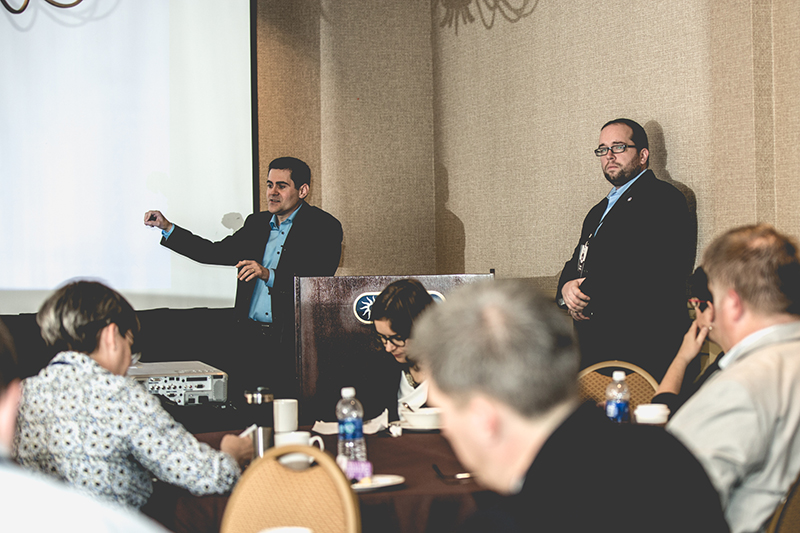 “The Bible doesn’t promise us freedom from temptation,” Moore said. “The Bible promises us the power of the spirit to walk through temptation.”

Moore gave similar remarks to an audience of 1,300 people at the conference. The same morning, the conference featured three speakers who once considered themselves gay or lesbian.

Moore joins a chorus of psychologists and religious leaders who have departed from the once-popular therapy.

In 2009, the American Psychological Association adopted a resolution urging mental health professionals to avoid reparative therapy. Since then, California and New Jersey have passed laws banning conversion therapy for minors, and several other states have considered similar measures.

Earlier this year, the 50,000-member American Association of Christian Counselors amended its code of ethics eliminating reparative therapy and encouraging celibacy instead.

John Paulk, who was once a poster boy for the ex-gay movement, apologized in 2013 for the reparative therapy he used to promote. Earlier this year, Yvette Schneider, who had formerly worked for groups such as the Family Research Council, Concerned Women for America and Exodus International, published a “coming out” interview with GLAAD calling for bans on reparative therapy. In addition, nine former ex-gay leaders have denounced conversion therapy.

“There were utopian ideas about reparative therapy that frankly weren’t unique to evangelicalism,” Moore said. “That was something that came along in the 1970s and 1980s about the power of psychotherapy to do all sorts of things that we have a more nuanced views about now.”

Some pastors, like John Piper, a respected Minneapolis preacher and author, still encourage the possibility of change for those who have same-sex attractions.

Exodus International, one of the most prominent ex-gay ministries shut down in 2013. While other ex-gay groups such as Restored Hope Network still exist, many religious leaders are now encouraging people with same-sex attraction to consider celibacy.

“The idea that one is simply the sum of one’s sexual identity is something that is psychologically harmful ultimately,” Moore said. “And I think also we have a situation where gay and lesbian people have been treated really, really badly.”

Moore said the ERLC is working with parents of those who are gay and lesbian.

“The response is not shunning, putting them out on the street,” he said. “The answer is loving your child.”

For years, gay evangelicals had three options: leave the faith, ignore their sexuality or try to change. But as groups such as Exodus became unpopular, a growing number of celibate gay Christians have sought to be true to both their sexuality and their faith.

A newer question among some Christians is whether those with same-sex attraction should self-identify as gay.

In his address Monday, traditional marriage advocate Sherif Girgis plugged the website Spiritual Friendship, intended for Catholics and Protestants who identify as gay and celibate. Some Christians are debating whether identifying as gay or having a same-sex orientation is itself unbiblical.

“It’s not the way I would articulate it because I think it puts on an appendage to a Christian identity,” Moore said. “So I don’t see them as enemies who are trying to be destructive; I just don’t think it’s the best way to approach it.”

Rosaria Butterfield, a former lesbian who rejects the “ex-gay” label and the movement behind it, said Christians should not use “gay” as a descriptive adjective. Moore interviewed Butterfield, whose address at Wheaton College generated protests earlier this year, during Tuesday’s conference.

“There is no shame in repentance because it simply proves that God was right all along,” Butterfield told Moore.

Another conference speaker and Moody Bible Institute professor Christopher Yuan teaches a more traditional message of celibacy for those who, like him, are attracted to the same sex. He shuns labels, but he believes more younger Christians are self-identifying as gay and celibate.

“I’m kind of label-less,” Yuan said before his address. “I think I’m a dying breed, though.”