The “Lost Shul” Mural now hangs in the entrance of the Ohavi Zedek Synagogue in Burlington after its move from Hyde Street to North Prospect Street. Photo courtesy of USA Today, via Elizabeth Murray/Free Press

BURLINGTON, Vt. — Aaron Goldberg braced himself, clutching the rope attached to a paper cover-up that hid the now-restored “Lost Shul” Mural at the Ohavi Zedek Synagogue on Sunday.

When given the signal, he pulled on the rope, tearing the paper down and revealing the vibrant colors that adorn the new installation. Attendees of the grand reveal shook Goldberg’s hand as they crowded into the front hallway of the synagogue to take a closer look.

Sunday was the first time the restored mural has been on display for the public at its new home on North Prospect Street. It is now suspended by steel beams and reinforced with a steel backing at the building’s entrance.

The mural had been preserved at the former Chai Adam Synagogue on Hyde Street in Burlington in the 1980s after the building had been turned into apartments. Efforts to move and restore the mural, which was painted in 1910, started taking shape about three years ago, Goldberg said.

According to the project website, the mural is part of a widespread tradition of wall paintings in Eastern Europe that was almost entirely obliterated during the Holocaust by the Nazis.

Goldberg, the project co-director, said Sunday he was “elated” that the mural is on display again. 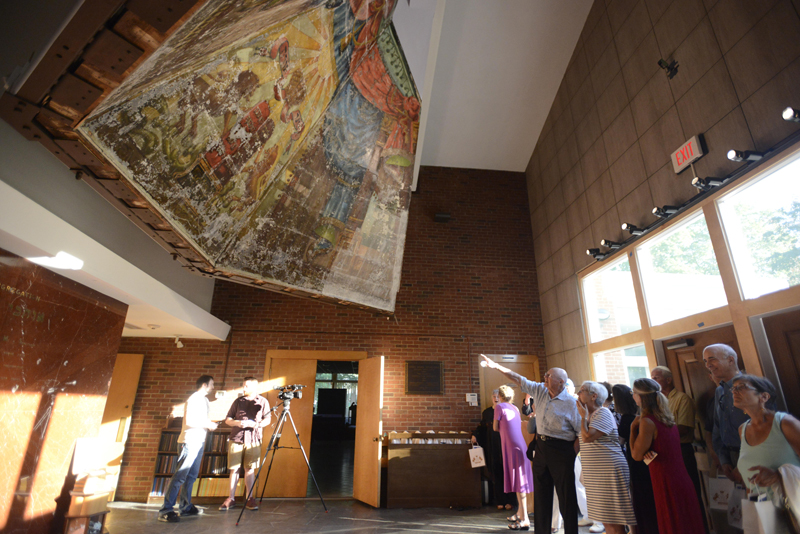 Attendees of the official unveiling of the “Lost Shul” Mural at the Ohavi Zedek Synagogue see the mural for the first time and listen to Richard Kerschner, the Project Conservation Counsultant, as he explains the parts installation. Photo courtesy of USA Today, via Elizabeth Murray/Free Press

“This has been a dream come true for us,” Goldberg said. “We walled up the mural for its own protection in 1986, and this has been a long process of planning to bring the mural safely from its former home to its new home. It’s a symbol of freedom over oppression and hope over despair.”

Former Gov. Madeline Kunin spoke at an event at the synagogue before the mural was revealed, saying the mural is the only one of its kind this size in the U.S. or in Lithuania, where the painter Ben Zion Black originated. She said it is a miracle that the mural has been “brought back to life.”

“It has a special power,” said Kunin, who has endorsed the project. “It kind of grabs you when you’re looking at it. It’s more than just paint and plaster.”

READ: Inside a dying German church, a new synagogue rises

Both U.S. Sen. Patrick Leahy, D-Vt., and Burlington Mayor Miro Weinberger put the mural in a larger context of immigration, and of the endurance and survival of Judaism and its history.

“The rediscovery of this mural is a reminder that Burlington has always been a city of immigrants, and that its strength is built on the shoulders of so many who have come here for so long,” Weinberger said. “That will continue to be a force of strength and renewal in our time as well.”

“This could have been lost decades ago, and it wasn’t,” Leahy said, emphasizing that the mural is a historical treasure. “We kept that piece of history. That should make all of us — Jews, Christians, all of us — excited that it’s here.”

(Murray writes for the Burlington Free Press in Burlington, Vt.)