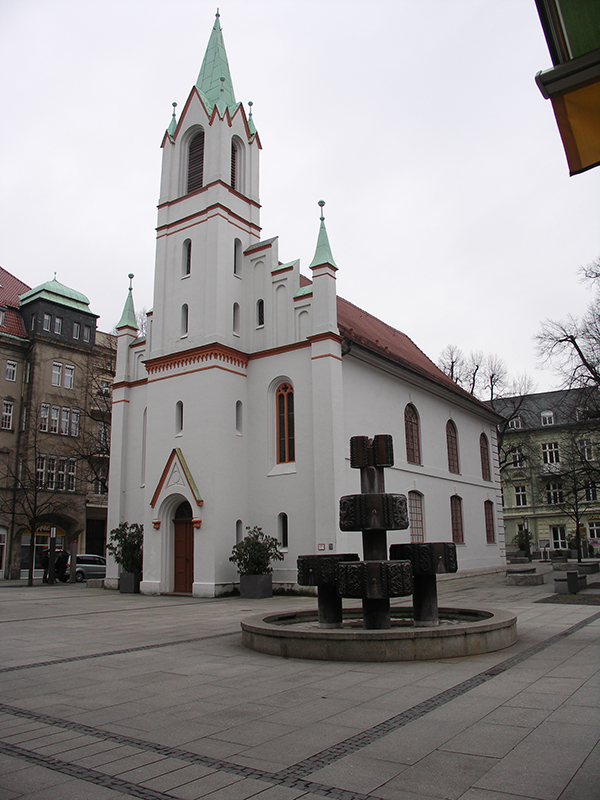 The former Schlosskirche was converted into a synagogue for the city's budding Jewish community in Cottbus, Germany. It is the first synagogue in the German state of Brandenburg since 1938. Photo courtesy of City of Cottbus
April 17, 2015
Sumi Somaskanda 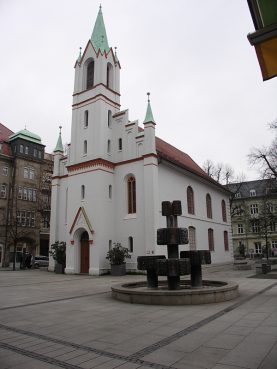 The former Schlosskirche was converted into a synagogue for the city's budding Jewish community in Cottbus, Germany. It is the first synagogue in the German state of Brandenburg since 1938. Photo courtesy of City of Cottbus

Like many other parishes in Germany, the Schlosskirche no longer had a congregation of its own. And recent efforts to breathe life back into the 300-year-old structure had come up short.

There were environmental seminars, educational workshops and, for a long time, food and shelter for the homeless. Then word got out that the local Jewish community was looking for a synagogue to replace their cramped quarters around the corner. Church officials jumped at the chance.

“For me, it was the only possibility to keep the church as a house of God in the long run,” said Ulrike Menzel, the regional superintendent of the Evangelical Church in Germany, the nation's main Protestant body.

With the city’s backing and unanimous support among church leaders, state officials offered to buy the building for the Jewish community and turn it into a synagogue -- the first in the eastern State of Brandenburg since 1938.

By the time the inauguration ceremony rolled around in January, a rabbi read in the airy, bright chapel where Christians once prayed.

“Of course we are very happy,” said Max Solomonik, a spokesman for the Cottbus Jewish Community. “Now we can have our Shabbat, carry out our festivals.”

Despite fears of rising anti-Semitism across Europe, Jewish life is flourishing in Germany. There are new rabbinical seminaries, day schools, kosher supermarkets and study institutes. According to the Berlin office of the American Jewish Committee, more than 200,000 Jews live in the country today, compared to just 30,000 when the iron curtain fell in 1989. A large majority are Russian-speaking immigrants from former Soviet satellite states like Moldova and Ukraine.

The German government has promised support and protection to Jews amid the growing threat of Islamist violence across Europe. In the wake of recent terror attacks against the Jewish communities in Paris and Copenhagen, Israeli Prime Minister Benjamin Netanyahu called on European Jews to emigrate to Israel. German Chancellor Angela Merkel urged them to stay.

“We would like to continue living well together with the Jews who are in Germany today,” Merkel said at a press conference in Berlin in February. “We are glad and thankful that there is Jewish life in Germany again.”

Cottbus’ fledgling congregation is made up of 460 members, but the community numbers closer to 1,000. They say they have received overwhelming acceptance from the city, and most residents.

When plans to convert the Schlosskirche into a synagogue went public, Menzel received a handful of critical emails and complaints: residents hadn’t been consulted, the central location would make an easy target for anti-Semites, police barricades would disrupt life in a popular commercial district.

“There were people getting worked up who don’t even go to church,” said Menzel.

She told skeptics that the synagogue was important for Cottbus, and a way to make amends for the city’s painful past.

In the early 1900’s, Cottbus had a small but vibrant Jewish community of businessmen, traders and craftsmen. They constructed a majestic synagogue with intricate stained glass windows that held as many as 300 worshippers. It was burned to the ground in 1938 during Kristallnacht. The city’s Jews vanished soon after. 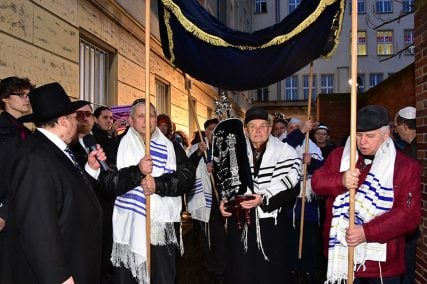 A large procession brought the Torah scroll to the new synagogue. With music and dance, the Cottbus Jewish Community celebrated the official opening. The city's original synagogue was burned to the ground during Kristallnacht in 1938. Photo by Michael Helbig

Nearly 80 years later, the new synagogue occupies a prominent place along the central shopping promenade, a stone’s throw from an H&M clothing store and a fast-food fish joint. Religious leaders say the synagogue is a testament to the city’s tolerance. Others -- including members of the Jewish community -- are worried it might be too conspicuous.

Cottbus lies in far-eastern Germany, near the Polish border. The region is notorious for its neo-Nazi scene. High unemployment and youth flight have helped breed support for the right-wing populist National Democratic Party in Brandenburg and its neighbor to the south, Saxony.

In 2006, vandals defaced the Jewish community’s offices in Cottbus with swastikas. The city reacted swiftly, reassuring the Jews they were welcome. Solomonik said support has been crucial in making his community feel comfortable in Cottbus.

Despite the resurgence of Jewish life, the American Jewish Committee says Germany isn’t immune to the anti-Semitism that’s been on the rise across Europe. Anti-Semitic incidents, they say, are often underestimated in the country: either condemned as right-wing extremism, misinterpreted or simply not reported at all.

“The statistics are woefully inadequate in reflecting the reality on the streets and in everyday life,” said Deidre Berger, director of the American Jewish Committee in Berlin. “If everything is classified as an incident of right-wing extremism then you don’t have to see this as a problem because you see it’s just those crazy people on the far right. But unfortunately many of these acts were carried out by people in all sectors of German society.”

In Cottbus, neither the Jewish community nor authorities have recorded any incidents, so far. The synagogue has quietly blended into the tapestry of shops and trees on its cobblestoned square. Plain-clothes police monitor the facility regularly, but not around the clock. 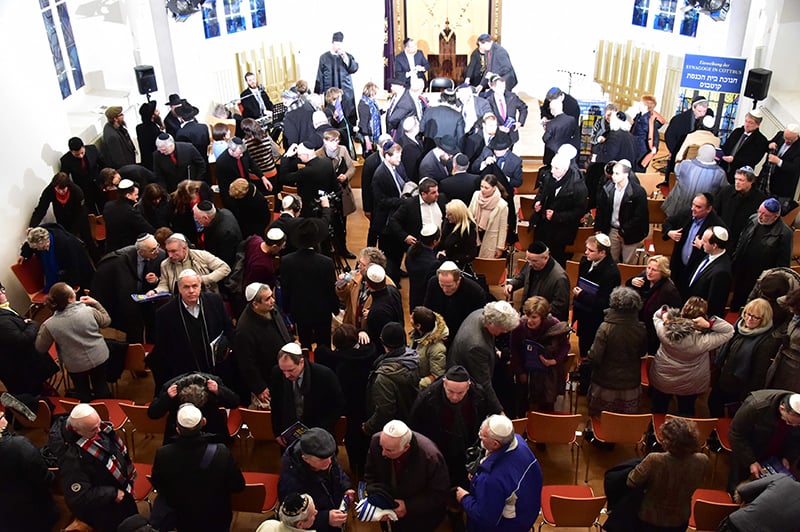 Some one thousand people turned out for the inauguration ceremony in Cottbus, Germany. Members of the Jewish community say the city has welcomed them with open arms. Still, fears remain over the presence of right-wing groups in the region. Photo by Michael Helbig

It’s helped that the Jewish community has made a point of opening its doors to the public, said Menzel. Around 1,000 people turned out to the inauguration ceremony. Many say they are curious to get to know a faith and culture that has been absent in Cottbus for so long.

At a family-owned jewelry shop that occupies the same square, owner Christiane Stack said not much had changed at the church since the Jewish community moved in, except for the silence.