(RNS1-JULY 2) Joseph Smith, Jr., the founder of Mormonism, lived from 1805 to 1844, when he was killed while while awaiting trial for treason. For use with RNS-SMITH-BOOK transmitted July 2, 2014. Creative Commons image by the More Good Foundation
August 5, 2015
Reuters 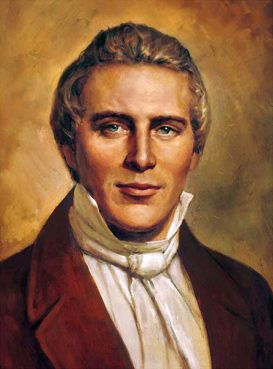 The Mormon Church has released images of a stone used by Joseph Smith, Jr., to translate symbols on gold plates into the test for the Book of Mormon.

SALT LAKE CITY (Reuters) - The Mormon Church released photographs on Tuesday (August 3) of a so-called "seer stone" that members believe was used by the Utah-based faith's founder, Joseph Smith, to write the Book of Mormon, its principal sacred text.

Photos of the egg-shaped, chocolate-brown rock are in a new publication that also carries images of the first printer's manuscript of the Book of Mormon, which Smith said was based on ancient records and include an account of a visit to America by Jesus Christ.

"Revelations and Translations, Volume 3: Printer's Manuscript of the Book of Mormon," is the 11th volume of a project by The Church of Jesus Christ of Latter-day Saints to make every document produced by Smith or his scribes available to the public.

The faithful believe God helped Smith translate the text into English for the Book of Mormon, a companion to the Bible, while examining the "seer stone" inside a hat.

Smith's first manuscript appeared in 1829, but less than a third of that original document survives due to water damage during the 19th century.

Its remains are kept in the faith's Church History Library in Salt Lake City, while the stone is kept in a Church vault.

The publication of the original manuscript will follow in a future volume of the Joseph Smith Papers, the Church said.

The printer's manuscript, which is virtually complete, was created so that the original could be kept safe while the copy was sent to printers in New York to set type for the first edition of the Book of Mormon.

The LDS Church, which has more than 15 million members worldwide, said the publication of the latest volume represented a major milestone.

It said the print edition of the Joseph Smith Papers is expected ultimately to span more than 20 volumes divided into six series: Journals, Revelations and Translations, Histories, Documents, Administrative Records, and Legal and Business Records. The first volume of the project was published in 2008.