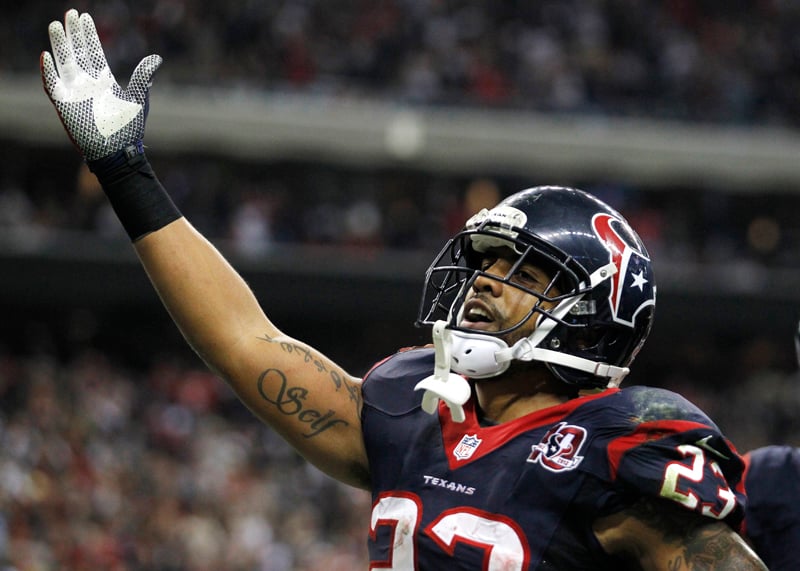 Houston Texans running back Arian Foster celebrates after scoring a touchdown against the Cincinnati Bengals during the third quarter of their NFL AFC wild-card playoff football game in Houston on Jan. 5, 2013. Photo courtesy of REUTERS/Tim Sharp
*Editors: This photo may only be republished with RNS-TURNER-COLUMN, originally transmitted on Aug. 11, 2015.

(RNS) Professional football isn't known for being a place that encourages deep intellectual reflection. With its history of silence on head injuries, locker-room harassment and macho culture, the NFL would be the last place you would expect to find a philosopher and a poet -- and an atheist to boot.

But all of those things come together in Houston Texans running back Arian Foster, who is the subject of a feature in ESPN The Magazine's Aug. 18 College Football Preview Issue, published late last week. He revealed that he didn't believe in God. That's unusual in a league where players regularly point to the sky (never mind the questionable theology behind the assumption that heaven is somewhere up in the sky) and meet for regular Bible studies.

Foster, raised in New Mexico and San Diego, played for the University of Tennessee Volunteers before entering the NFL in 2009. His father was Muslim, and Foster grew up in that tradition, praying five times a day and asking God for help when he was in a difficult situation.

He eventually garnered the courage to tell his father that he didn't believe in God, and instead of a lecture, Foster's father told him to "go find your truth."

So he set off to do that: Foster majored in philosophy at the University of Tennessee, where, as a member of the football team, he was also required to attend church services as a form of "team-building." The team didn't go to any majority-black churches, Foster noted, and he felt a chasm develop between himself and his teammates. Even the ones who weren't devoutly religious accepted the terms on which they had to belong to the team, things such as attending Bible study and chapel outside of practice.

Like many people who don't adhere to a religion, Foster's disbelief in God stems from intellectual objections to the existence of an omnipotent, loving being.

"There's no dogma in science itself," he said. "But religion can be like, 'We're right, and if you're not in the boat, you're going to hell.'"

One of the deep-seated issues with evangelical culture is the way Christians love to claim celebrities as their own. We like to point to famous people and say, "See? They're one of us! They're influencing the culture for good."

When Shia LaBeouf commented last fall that he had "found God" during the filming of "Fury," Christian outlets across the Internet were quick to pick it up. When I -- after initially falling for it, too! -- wrote that I thought he had been talking about method acting and not a personal experience of religious conversion, I got some of the meanest, most blistering comments I've ever had the pleasure of receiving. (Sample: "God will judge you for your judgment. How dare you put words into anyone’s mouth.")

READ: Shia LaBeouf fooled us all

It's only been a few days since the ESPN article came out, and Foster will face plenty of obstacles on the road ahead. His wife filed for divorce in July -- they are the parents of two young children -- and he settled a lawsuit out of court last year with Brittany Norwood, a woman who claimed Foster tried to pressure her into having an abortion after he cheated on his wife with her.

The reaction from Christians on social media to Foster's atheist revelation has been varied.

One person called Foster a "fool," citing Psalm 14:1: "Fools say in their hearts, 'There is no God.' They are corrupt, they do abominable deeds; there is no one who does good." Several have lamented the fact that Foster has been praised for his courage in talking about atheism but that Tim Tebow was "slandered" for being vocally Christian. Many, though, have been kind, even conciliatory:

Is it possible that Christians are making America a better, more tolerant place for pluralism? Or are we making it worse?

Probably the answer is both, because Christians, just like everyone else, can be both obnoxious and wonderful people. 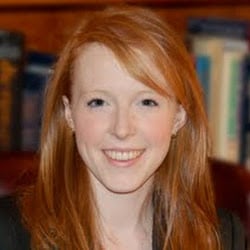 Containing multitudes is what the story is about -- it's how Foster can have the word "COEXIST," made up of symbols of the world's religions, tattooed on his muscular forearm, and still be an atheist. It's how he can make meaningful friendships with people of different faiths.

The NFL will have to add religious diversity to its ever-increasing list of issues to tackle.

(Laura Turner is a writer and editor living in San Francisco. She is interested in the intersection of church and popular culture.)