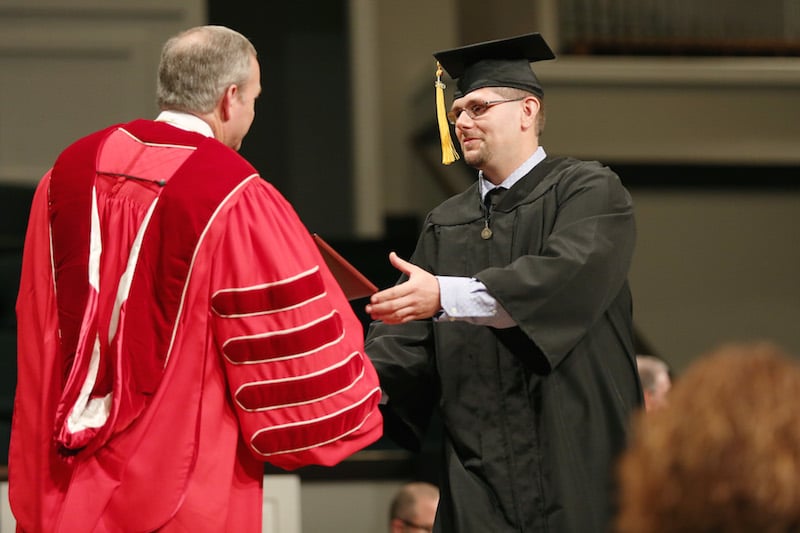 (RNS) There is a persistent narrative among secular observers and religious progressives. It goes like this: Now that same-sex marriage is legal nationwide and isn’t hurting anyone, traditional Christians will quickly drop their objections and join the winning side of the most significant quest for justice in our time.

Since young evangelicals are more accepting of homosexuality than their elders, perhaps Christian colleges will lead the way.

The reality, however, is the opposite: Evangelicals leaders are doubling down on their refusal to affirm same-sex relationships.

The Council for Christian Colleges and Universities is the pre-eminent association in evangelical higher education. Members include academically rigorous schools like Wheaton, Gordon, and Calvin colleges. The flagship universities of several evangelical denominations are members. It also includes the leading colleges affiliated with Southern Baptist state conventions.

The Washington-based council advocates on financial aid issues and coordinates a study abroad program for its members. But membership signals a specific type of theological commitment. While CCCU member institutions disagree on many doctrinal matters, they believe homosexuality is sinful and marriage is between a man and a woman.

Tennessee’s Union University made news this week by being the first college to withdraw from the council in protest.

The council, which has had considerable problems of its own in recent years, now faces a crucial choice. It can either expel schools that affirm homosexuality, or it can watch while its members bolt the organization and form a new one.

Its relevance is already somewhat in question, as the council has been less visible than expected on the issue of religious freedom, and particularly the contraceptive mandate in the Affordable Care Act.

But sharing an institutional membership with colleges that affirm same-sex marriage significantly undermines conservatives’ arguments. It may ultimately undermine the council’s reason for existence.

Moderates see in this episode an important opportunity to affirm Christian unity. But conservatives do not believe Christians can agree to disagree about homosexuality. Traditionalist institutions see no value in associating with moderate ones that have, in their view, traded the truth of the gospel for the idol of our time: eroticized, autonomous self-expression.

Union President Dub Oliver will no doubt receive effusive praise from the most prominent conservative evangelicals for his courage and conviction in pulling Union out of the lukewarm council.

In the spring of 2014, the conservative evangelical world protested loudly and decisively when World Vision USA, a massive international aid and relief organization, announced it would employ Christians in same-sex marriages. After 48 hours of intense criticism (including conservative Christians withdrawing their financial sponsorship of impoverished children), World Vision reversed course.

If the recent controversy is analogous to the World Vision situation, we can expect to see conservative evangelicals leaders flex their muscles and demand compliance with their position on marriage and sexuality. Unlike World Vision, no children will suffer if the council folds.

In fact, there seems to be no downside for conservative Christian colleges. They may actually be better off with a new association comprised of senior leaders from legal advocacy organizations and lobbyists who can advocate for religious freedom carve-outs in future gay rights legislation.

Union University and other traditionalist evangelicals will have their way, at least this time around.

This episode reveals that there is no middle ground for conservative Christians when it comes to same-sex relationships. If you “agree to disagree,” you affirm. And the broad center of U.S. evangelicalism simply does not affirm homosexuality.

But these conservative Christian colleges have a long and difficult battle ahead of them, even if elites remain steadfast and unanimous in their commitment to historic Christian teaching on sexuality.

Conservative Christian colleges’ survival depends on young people. As evangelical youth increasingly know and like gay people in their neighborhoods, schools, and churches, they will be pulled, perhaps irresistibly, toward affirmation of same-sex relationships.

Thus market forces, debates over authority, and institutional politics will continue to shape the future of this classic dilemma within American evangelicalism.