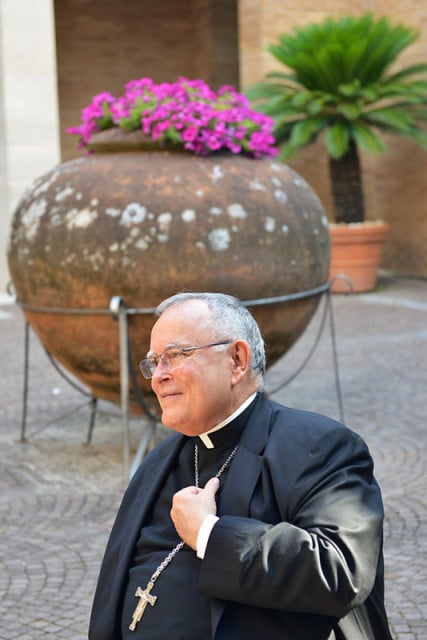 Archbishop Charles J. Chaput, O.F.M., Cap. during the Festival of Families announcement at the Pontifical North American College in Rome on June 23, 2015. Photo courtesy of Chris Warde-Jones, Archdiocese of Philadelphia

(Reuters) – The Philadelphia Archdiocese has ordered a local parish hosting events for gay and transgender Catholics during Pope Francis’ U.S. tour next month to cancel the program, organizers said on Tuesday.

Workshops and other discussions around lesbian, gay, bisexual and transgender issues were scheduled to be held at St. John the Evangelist Church on Sept. 26, the day the pope arrives in Philadelphia for a two-day visit.

Pope Francis will attend a summit on families being held in the city, and LGBT Catholic groups have asked for an official presence at the gatherings to express their view that gays and lesbians should be more included in the Church.

Philadelphia Archbishop Charles Chaput has said he would allow the presence of openly gay and transgender Catholics at the World Meeting of Families but did not want the groups to lobby for their issues during the event.

Last week, St. John officials told organizers of the LGBT program they were directed by the archdiocese not to hold the event at their parish, organizers said. The LGBT program was not part of the families summit.

“This is yet another instance of the kind of exclusion LGBT Catholics and supporters have endured for decades,” the Equally Blessed Coalition, a gay Catholic coalition and coordinator of the event, said in a statement.

An archdiocese spokesman said parishes decide which programs to offer but it is expected that they have content in line with the Church’s teachings.

“In this case, the Archdiocese was asked to evaluate the program and provide guidance, which it did,” spokesman Kenneth Gavin said. He said the decision was made locally by the parish.

“The workshop fills a void at the World Meeting of Families,” DeBernardo said in a statement. “No speakers at the World Meeting will address the topic of gender identity, yet this is an issue that is being faced by more and more Catholic families and communities in the U.S.”