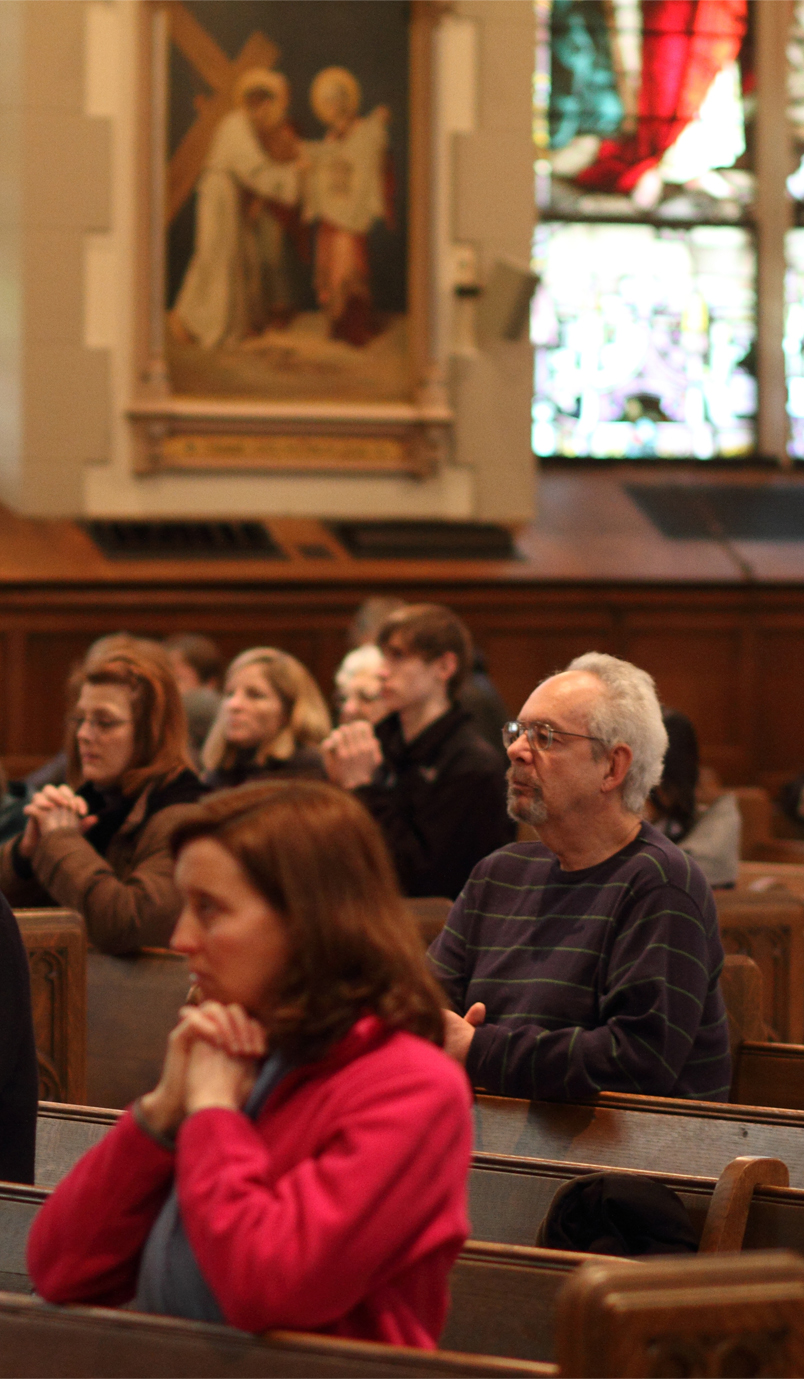 American Catholics increasingly say they -- not church leaders -- are the final arbiters of what is morally right or wrong on sexual morality.
September 2, 2015
Cathy Lynn Grossman

(RNS) Sam Clark wasn’t reared as a Catholic. He never converted, either.

Yet Clark, 50, of Carson City, Mich., likes Pope Francis -- “the most ecumenical pope in my lifetime" -- and the church’s teachings also appeal to Clark, who has many Catholic relatives and friends.

Like 45 percent of U.S. adults, he’s “Catholic-connected,” according to an innovative look at the spectrum of American Catholicism that Pope Francis will encounter this month on his first U.S. visit. 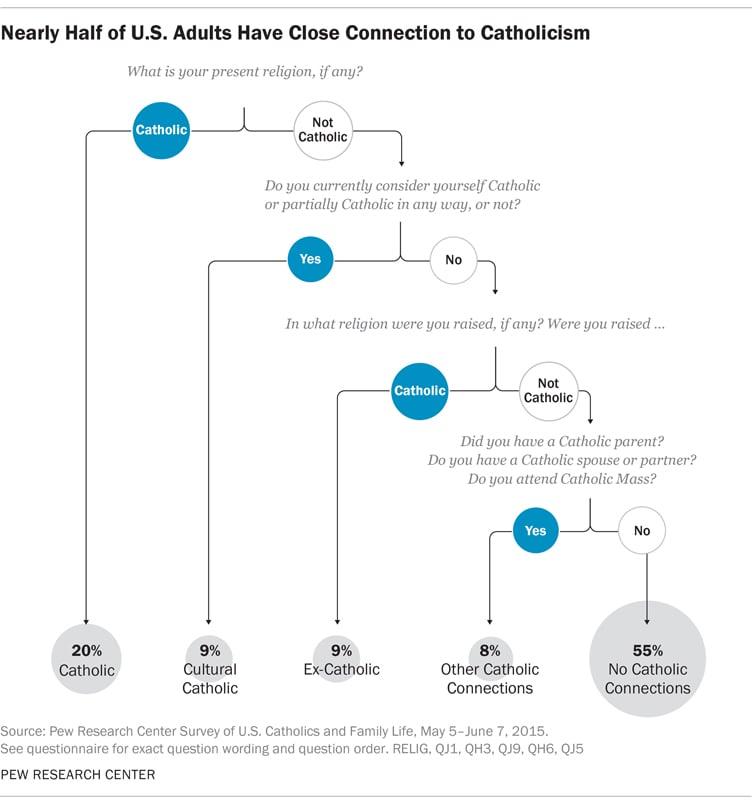 Nearly Half of U.S. Adults Have Close Connection to Catholicism. Graphic courtesy of Pew Research Center. Numbers adjusted for rounding.

A new Pew Research survey released Wednesday (Sept. 2) goes beyond the standard tally of how many people say their religious identity is Catholic. It asks many original questions that  Pew has not studied before.

The survey of 5,122 U.S. adults, including 1,016 self-identified Catholics, finds that the church’s share of the religious marketplace is down from 23.9 percent in 2007 to 20 percent in the new survey, conducted in May and June of 2015. Yet it also finds that the warm, engaging pontiff may find fertile ground for his message of faith.

READ: Catholics love their celebrity pope and most -- not all -- of his priorities

Pew found that 8 percent of non-Catholics, like Clark, feel an affinity to the Catholic church without affiliating.

And 9 percent of U.S. adults are “cultural Catholics” on Pew’s spectrum. They may have been reared Catholic but no longer identify themselves as Catholic. However, they still consider themselves at least partially Catholic by culture, ancestry, ethnicity or family tradition, the survey finds.

Rivera grew up in the Catholic Church, and his parents still worship at the parish where he was confirmed. “I absolutely have a sense of connection. It’s ingrained in how I was raised. The morality and ethics of the universal Gospel that it teaches are fantastic,” said Rivera.

But as Catholic as he feels, the son of Mexican immigrants said he also encountered rampant racism six days out of seven from the same people who were celebrating love and community on Sundays.

“Pope Francis is really cool -- the most innovative and up-to-date pope ever. But I don’t want to go to a church that’s holy on Sunday and racist throughout the week,” Rivera said. So, today, he worships with his wife and children at nondenominational Protestant churches where no one is going to call him a “wetback,” he said.

Finally, Pew identified 9 percent of Americans as ex-Catholics -- also known as  “lapsed” or “fallen-away” Catholics -- who were reared in the church but have turned their backs on it.

Count Jennifer Haslet-Phillips, 39, of Friday Harbor, Wash., among these.

Haslet-Phillips, who describes her religious identity today as “absolutely nothing,” says she nevertheless appreciates many of Pope Francis’ priorities.

“I think it’s really great that he has focused on the poor and on why people are poor; that he makes climate change and stewardship a Catholic priority. And he’s right to take a critical look at corporate capitalism,” she said. “But I am strongly negative about the church.”

The deal-breaker for her? She’s angry that the 2-year-old Catholic hospital in Friday Harbor doesn’t offer “a full range of reproductive health care and family planning” because it follows the Catholic bishops' ethical directives.

So there will be no Catholic schools or summer camps for her three children. On Sunday mornings, “we go to the beach.”

For all her admiration, not even Pope Francis will change her mind about ever rejoining, she predicts. And Pew finds most ex-Catholics agree.

Many cultural Catholics are still within reach of the church. One in 3 say they attend Mass once or twice a year or did some observance for Lent. And 4 in 10 say that if they were seriously ill, they would want to receive the anointing of the sick -- one of Catholicism’s seven sacraments -- from a priest. 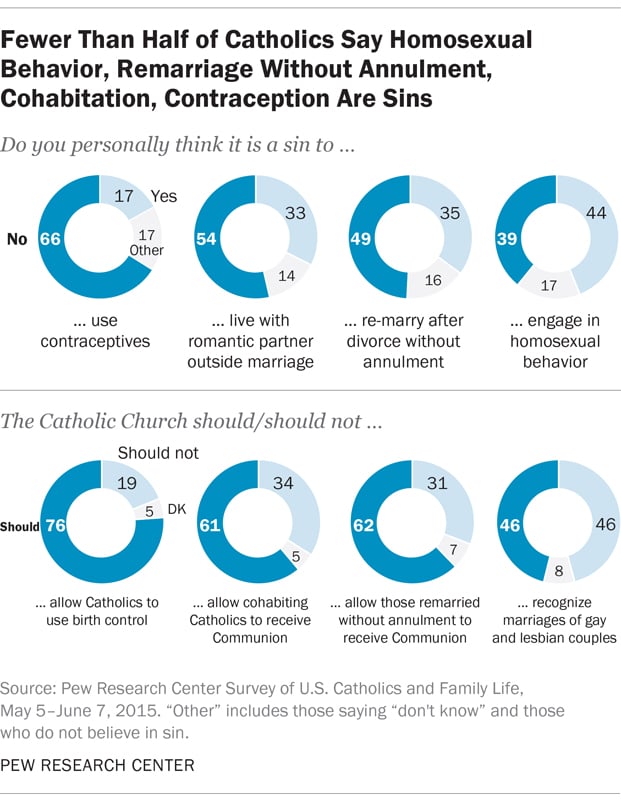 Still, Pew’s new survey shows that there is widespread disagreement within the church among those 20 percent who do call themselves Catholic. More than 60 percent want the church to change its policies on Communion (divorced Catholics who have remarried without an annulment shouldn't receive; neither should couples who live together outside of marriage). Almost half (46 percent) think gay marriage should be recognized; an equal percentage say it should not.

On other important issues, the Pew survey found that most Catholics align church teachings they consider "essential" to what it means to be Catholic. Leading the list:

The four major themes of the pope's visit -- social and economic justice, environmental stewardship, immigration and the value of the traditional family -- will resonate with many, but not all, U.S. Catholics.

The new Pew study also finds that only a minority see addressing climate change (29 percent) or opposing abortion (33 percent) as "essential" to their Catholic identity.

Catholics are evenly divided over whether it is sinful to spend money on luxuries without also giving to the poor. Neither do most see it as a sin to use energy without concern for the impact on the environment.

However, one Pew survey number should give Francis hope: 7 in 10 U.S. Catholics say they cannot ever imagine leaving the Catholic Church, no matter what.