But for all the varied and fascinating stops, this trip to the Batu Caves here has been the best yet. The Batu Caves are carved out of the limestone hills just outside this city, Malaysia’s bustling capitol. It is a Hindu temple, one of thousands in a country where Islam is the official religion and Hindus are a significant minority.

Visitors to the temple pass under a massive golden statue of Murugan and then climb 272 brightly painted stairs to enter the caves and the temple proper. Bring water, tennis shoes and watch out for the monkeys — more on that later. 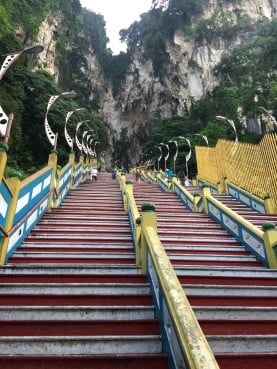 That’s a lot of stairs. Some Hindus pray, with hands together, as they climb them.

People pray as they ascend the stairs, passing under arches with colored figures of Shiva, Lakshmi and many other Hindu gods represented by peacocks, cows and other fanciful animals, like a the one that had a cow’s body, a woman’s head and breasts.

Once inside,  more colored figures are arranged in elaborate scenes in niches in the cave wall. 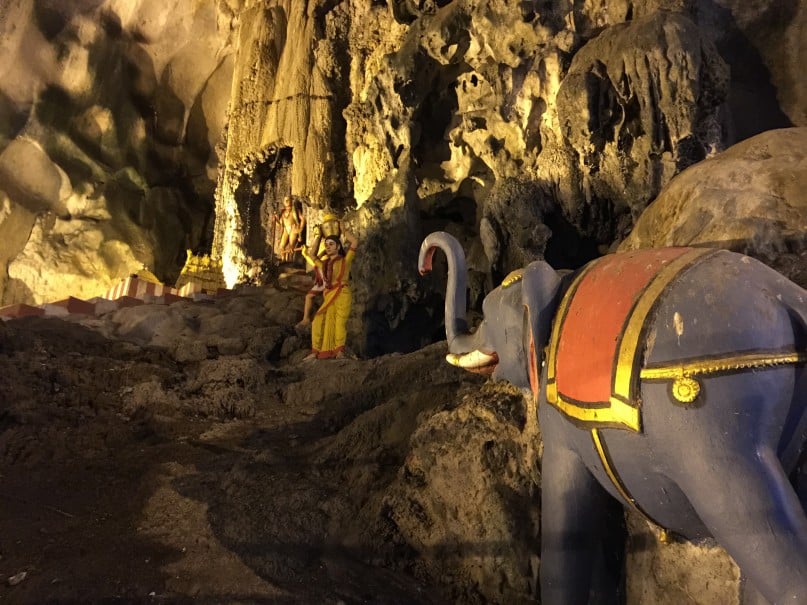 But the star attraction is a temple on a raised and roofed dias where about 100 people were praying with several ash-smeared priests bearing lighted candles before throned figures of the Hindu gods. Live music accompanied them. 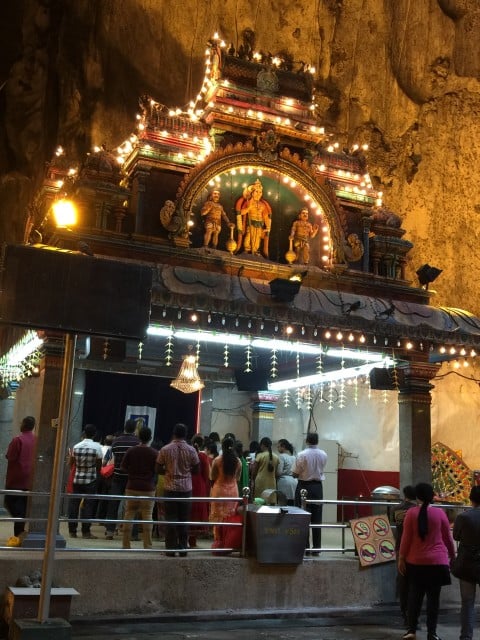 Up another couple flights of steps there is a second chamber where only six or so people worshipped in another temple before another manifestation of the gods. The ceiling of the caves is open to the sky. 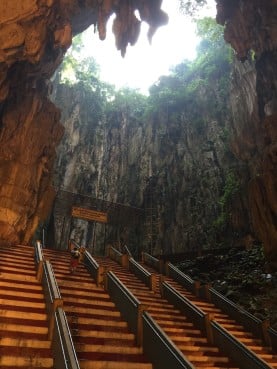 Open to the sky

About ten of us journalists — all from different countries, different beats and different religious backgrounds — wandered around in here for an hour. It was a time to experience firsthand what we learned about Malaysia’s religious minorities in meeting rooms during the week. And then there are the monkeys. That kind of a climb in about 90 degree heat makes a girl a little thirsty. Fortunately, there is a little kiosk at the top of the first set of stairs where an American tourist can get a cold bottle of Diet Coke (known as “Coke Light” here) before she starts — carefully — back down the steps. Well, apparently, the monkeys that clamber through the caves and over the temples like Diet Coke too. When I stopped to take a picture of one of them — my first encounter with monkeys in the wild — he launched himself up my left arm and knocked the soda out of my hands.

I hollered, he ran off, and the Diet Coke — partially capped — bounced down about 16 stairs. But I won in the end. I picked it up, dusted it off and toasted the Hindu gods. It was only later it occurred to me they might be trying to tell me to give up the habit. 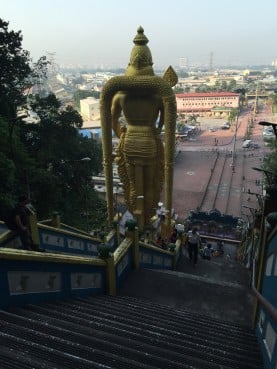 Back down, Diet Coke firmly in hand!