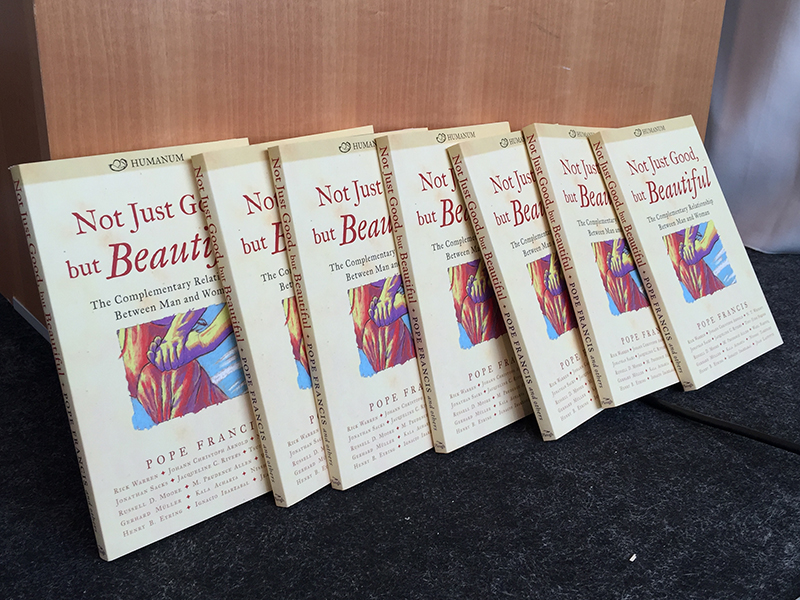 “Not Just Good, but Beautiful,” a new book reflecting on families from different faith perspectives, is being released at the World Meeting of Families. Photo by Kimberly Winston

PHILADELPHIA (RNS) It’s all-Catholic, all the time as this city awaits the Saturday arrival of Pope Francis, but for one hour Thursday (Sept. 24), representatives from several religions united in support of one thing that concerns them all: the family.

The occasion was the release of a book, with an opening chapter by the pope, intended to reinforce the bonds of family. Titled “Not Just Good, but Beautiful: The Complementary Relationship Between Man and Woman,” it contains 16 essays on the family — not just from Catholic thinkers, but also from evangelicals, a Jew, a Mormon, a Hindu, a Buddhist and a Muslim.

“No matter the differences between us religiously, we need to elicit positive proposals the family can lean on because the family needs it,” said Helen Alvare, a law professor at George Mason University School of Law and co-editor of the book. “The family is not a right or a left thing. It is an us thing.” 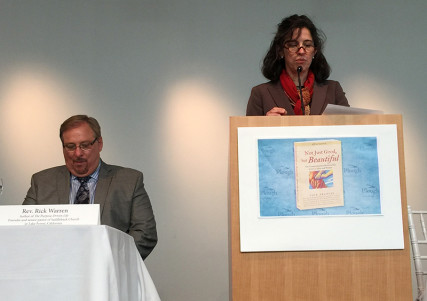 The book’s publication comes amid the World Meeting of Families, a four-day international Catholic conference held at the Pennsylvania Convention Center in downtown Philadelphia.

READ: The ‘Splainer: What is the World Meeting of Families?

But the site of the launch was reflective of the interfaith effort of the book — a room at the National Museum of American Jewish History with a balcony overlooking Independence Hall, where a raised platform already awaits Pope Francis’ appearance there Saturday.

Alvare said the chief danger to families today is fear — fear of getting married, of staying married and of having children. Add to that the economic challenges of raising a family today — something Pope Francis touched on in his history-making speech to the U.S. Congress on Thursday — and the family is “endangered,” she said.

The book takes a traditional perspective known as “complementarianism,” which holds that men and women have different, but complementary, roles in the family, in the church and in the world.

Evangelical megachurch pastor Rick Warren, a contributor to the new book, said, “I jumped at the chance to be a part of this book” and the 2014 interreligious conference called by Pope Francis that it stemmed from. Warren said the religions represented in the book need to “hold up successful marriages in our churches and our synagogues.”

“Rather than being an opponent of the negative we need to be a proponent of the positive,” he said. “We came to this from a lot of different perspectives, but one thing we agreed on is you cannot have a strong nation without strong families. They are the building blocks of society.”

Warren is expected to say much the same thing when he addresses the World Meeting of Families on Friday. Also speaking to the 17,000 people gathered at the convention center are a Mormon elder and a Muslim woman. One-fourth of the speakers at the four-day meeting are not Catholics, Alvare said.