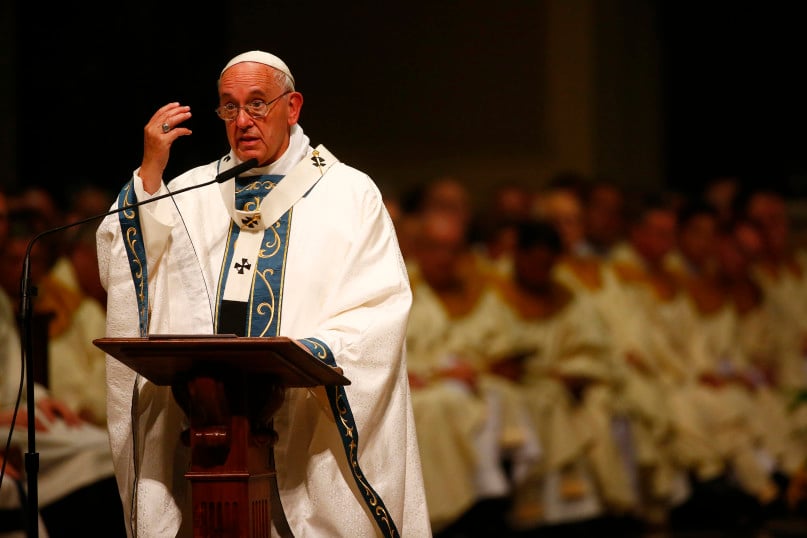 Pope Francis celebrates mass at the Cathedral Basilica of Saints Peter and Paul in Philadelphia, on September 26, 2015. Photo courtesy of REUTERS/Tony Gentile *Editors: This photo may only be republished with RNS-POPE-PHILLY, originally transmitted on Sept. 26, 2015.
September 28, 2015
David P. Gushee 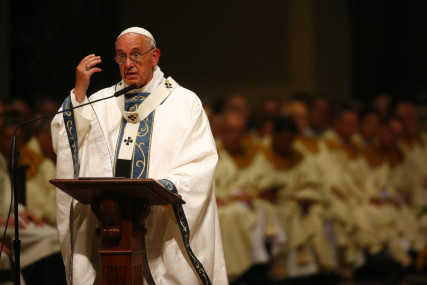 Pope Francis celebrates mass at the Cathedral Basilica of Saints Peter and Paul in Philadelphia, on September 26, 2015. Photo courtesy of REUTERS/Tony Gentile
*Editors: This photo may only be republished with RNS-POPE-PHILLY, originally transmitted on Sept. 26, 2015.

We live in a country of the Constant New Thing. Much of our religion is as new as the latest iteration of the iPhone. Not only do American Protestants continue to produce new versions of Christianity. America also produces new religions altogether, right here on our shores, all the time.

Pope Francis also represents his own 475-year-old Jesuit tradition, and in some ways has self-consciously adopted the 800-year-old tradition of piety and social action around Saint Francis of Assisi.

Then there is the newish 125-year old Catholic Social Teaching tradition, which can be dated to Pope Leo XIII's 1891 encyclical Rerum Novarum.

There is also a 50-year-tradition associated with the Second Vatican Council and the way it opened the Catholic Church to the modern world.

Those who know something about the Catholic tradition and these particular sub-traditions can hear echoes of all of them when Pope Francis speaks.

Those trained in traditions of such historic depth speak a different kind of Christian language than those who get their understanding of Christianity from the latest church start at a warehouse or the latest new religion concocted in somebody's imagination. They have categories of thought, particularities of vocabulary, ways of looking at the world that they did not create and that they are bound to represent whenever they speak. At its best this disciplined traditionalism carries forward ideas of depth, grandeur, and compelling power.

Some commented during the visit of Pope Francis that he is not just presenting Catholic tradition but also developing it in fresh and exciting ways. Certainly traditions are always under development, especially in the hands of creative leaders who are empowered to offer at least limited innovations during their time holding high religious office.

But I didn't hear anything from Pope Francis that struck me as a radical new innovation. His concern about climate change represents the majority reading of the scientific evidence, including the claim that climate change is affecting and will most profoundly affect those least able to cope with it -- the poor, especially in the Global South. His opposition to the death penalty and the arms trade reflect Catholic doctrine, as does his deep concern for the poor and for immigrants and prisoners. His call for Roman Catholics to lead with love rather than culture wars represents a judgment as to the best way to express the Spirit of Christ and proclaim the Gospel. It may be a course correction but it is not a fundamental break with historic Catholic tradition or doctrine.

This is not to deny the extraordinary charisma, humility, and compassion of Pope Francis. That is what feels so new, not his teaching itself.

Here is where the double-edgedness of tradition is especially striking. Religious tradition has staying power, because whatever it teaches ends up being invested with sanctity not just because of its content but because it has become tradition. But this applies to all aspects of tradition, those that reflect the very best values of that religious community and those that do not.

All this makes tradition-oriented faith communities very hard to change. Sometimes that's great. Sometimes it's not.