A few months ago I wrote about the deceitful, but all too successful, ways sex offenders in the church act when confronted with abuse allegations. Tragically, the sex offenders are not the only ones who deceive when confronted with abuse disclosures. Too often, leaders of faith institutions respond similarly when confronted with the mishandling of sexual abuse disclosures. Instead of acknowledging the failure and grieving over the pain the institution has caused an already traumatized victim, some leaders immediately move into self-protection mode and will stop at almost nothing in shifting the focus away from their own reprehensible failings in order to protect personal and organizational reputations.  (On an encouraging note, as I my last blog post noted, more and more church leaders are responding to abuse disclosures in a manner that places the affirmation and care of the victim above all else.)

A spotlight is switched on whenever an abuse survivor steps forward to tell others how institutional leaders mishandled their sexual abuse disclosure. Spotlights that shine light into dark places are seldom welcomed by those responsible for the darkness. These spotlights come in many different forms and sizes. Some are media reports or articles, while others take the form of lawsuits and criminal cases. In recent years, many survivors have been empowered to turn a blog or a Facebook page into bright and stubborn spotlight. A few years ago, I learned of a faith institution whose leaders had failed miserably when learning that children under its care had been sexually and physically abused. Years later, a handful of these children who were now adults privately confronted the leaders about how their failure to respond had devastated the lives of so many who had been abused. The leaders expressed concern and promised to “look into it”. After two years of empty lip service, the survivors realized that the leaders had little or no plans to do anything. The sad reality was that as long as these conversations remained private, many of the survivors believed that the leaders had nothing to lose by dragging it out as long as possible with the hope that they would simply go away. Instead of continuing the endless and fruitless private dialogue, these brave young adults decided to turn on a spotlight in the form of a public blog that exposes the horrors committed by offenders and the ongoing failures by the institutional leaders to properly respond to these crimes. Over time, this spotlight grew brighter as it reached more and more people around the world. Suddenly, empty lip service was no longer a viable response as the institution no longer controlled a private narrative.

Instead of focusing time and energy in doing the right thing when a spotlight is turned on, many leaders will focus time and energy trying to get them turned off, or at the very least pointed elsewhere. Fortunately, truth can be quite stubborn and has a way of finding the spotlight regardless of how hard others try to turn it off or point it elsewhere.

Turn off the spotlight. This is simply an effort by leaders to take the matter out of the public eye where they have very little control. Turning off the spotlight allows leaders to retake control of the narrative by taking it out of the public eye with little or no accountability.  Here are just two ways that leaders attempt to turn off spotlights that are beginning to have an impact.

Turn it off, you’re hurting Jesus. Leaders caught in the spotlight will often claim that the public exposure of their failures is the airing of “dirty laundry” that hurts the name of Jesus. Do you see the deception and danger of this tactic? Those who are bringing truth to the light are the ones accused of somehow hurting Jesus. Really? Perhaps, keeping dark and ugly truths silent is what hurts Jesus. Perhaps, bringing this junk out into the light is what Jesus is all about. Isn’t the Gospel all about a God who brings light into the darkest of places?

Turn it off, you’re hurting other victims. If the hurting Jesus tactic doesn’t work, leaders will often attempt to turn off the spotlight by claiming that it is hurting other victims. This tactic is reprehensible because it exploits other victims in order to protect personal and institutional reputations. An abuse survivor once told me that church leaders requested that she stop speaking publicly about how they had grievously failed her in light of her own abuse. They “advised’ that the mater be addressed privately as it was hurting other abuse survivors. Fortunately, she didn’t listen to their “advice” and kept the spotlight on. Victims are marginalized when leaders demand that they not share their stories in the manner in which they have decided, publicly or privately. This tactic is deceptively clever because it attempts to paint a bold survivor as an insensitive perpetrator in a disgusting attempt to shame the survivor into turning off the spotlight and putting the institution back into controlling the narrative. Leaders who really care about abuse survivors shouldn’t be attempting to control or silence them. Instead, perhaps they should be focusing their efforts on providing those other struggling survivors with qualified and experienced assistance. 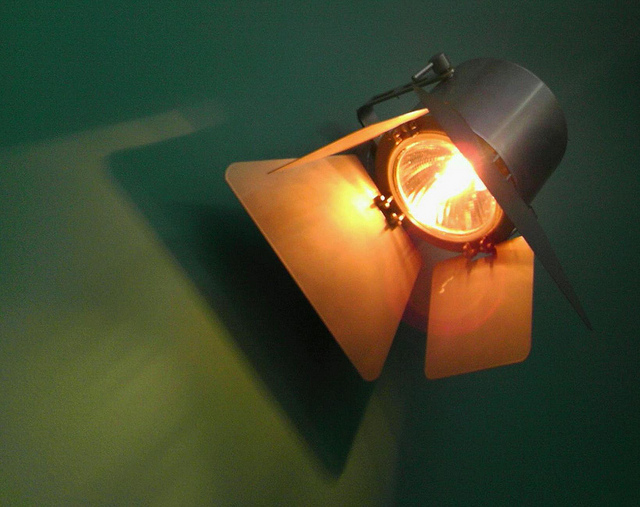 Point it towards the perpetrator.  What better place to turn the spotlight towards than the actual perpetrator.  In attempting to turn the spotlight off of themselves, leaders will argue that the focus should be exclusively on the one who committed the horrific crime. In doing so, they make very convincing statements about the horrors of sexual abuse and how such offenders should be punished. They emphasize this point by highlighting some of the heinous particularities of the offense, hoping that the watching world becomes so disgusted with the perpetrator that the failures by the leadership pale in comparison.  Shifting the spotlight towards the egregiousness of the offender’s behavior does not make the failed responses of leaders any less wrong and hurtful.

Point it towards the victim. At first, this may sound like a bad and ruthless tactic. However, we sadly live in a culture that is still quick to discredit sexual abuse victims. Shining a spotlight that casts doubt upon a victim’s character or credibility will naturally reduce any concerns about whether the leaders mishandled the situation. I recently learned of a clergy who abused his position to engage in a sexual relationship with an adult parishioner. When confronted about the matter, the minister laughed it off claiming that the victim was an alcoholic and couldn’t be trusted. Sadly, this attack of the victim’s veracity gave the church leadership the “perfect” excuse to do nothing. Other attempts to discredit victims can be more subtle such as claiming that victim was partially responsible for the sexual abuse, or that the victim is exaggerating about the type or gravity of the abuse.  Attempts to discredit victims come in all shapes and sizes with the sole objective of shifting the spotlight away from the leadership’s responsibilities and failures related to this crime.

Point it towards anyone but me. The reality is that many leaders who are caught in the glare of spotlights that expose ugly truths will work feverishly to point at anyone but themselves. An all too convenient tactic is to demonize those who express support for the victim. Their motives are questioned and their behaviors are labeled as “ungodly”, all the while the leader claims to be unfairly persecuted. This is done with the hope that the focus will shift from the mishandling of a sexual abuse disclosure to the persecution of Christians. Supporters aren’t the only ones who find themselves maligned by leaders desperate to push away the penetrating spotlight. I recently learned of a pastor who actually blamed unsuspecting and devastated parents for not protecting their child from being sexually abused by an adult. Little doubt that this distressing claim was an attempt to turn that darned spotlight off of his own failed response to this crime.

Spotlights don’t get turned off or turned away easily. I believe that has everything to do with the amazing individuals who bravely step forward and risk so much to have them turned on. So many of these heroes have spent their lives struggling in the shadows, all the while the leaders who failed them continue to pastor churches and operate ministries without ever thinking about the destruction and pain they have caused. A good friend once told me that the higher you go in church leadership, the less likely you are to encounter Jesus. I can’t help but wonder if those holding the spotlights are hoping to see Jesus somewhere in the lives of these leaders who profess His name. I like to think that Jesus is actually standing alongside these courageous souls helping them hold the spotlights in place and making sure that they stay on.

Perhaps, Jesus is the spotlight.

News
Too many Christians are afraid to admit they’re wrong, argues Tim Keller in ‘Forgive’
Follow us on Facebook!
Submit your photos to RNS