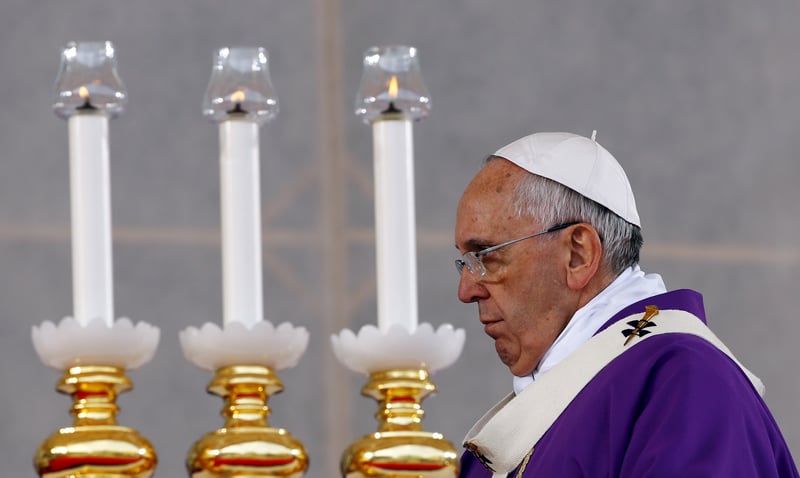 VATICAN CITY (RNS) Pope Francis on Wednesday (Oct. 14) asked forgiveness for a series of scandals that have befallen the Vatican and Rome.

Francis did not specify the scandalous events to which he was referring, although the departure of a gay cleric earlier this month may well have been on the pontiff’s mind.

“I ask you for forgiveness for the scandals that have occurred recently either in Rome or in the Vatican," the pope said during his weekly general audience in St. Peter’s Square.

Monsignor Krzysztof Charamsa announced he was happily in a same-sex relationship the day before the opening of the Vatican synod, a high-level meeting of bishops discussing family matters.

The announcement angered the Vatican, with its chief spokesman, the Rev. Federico Lombardi, criticizing the priest’s “very serious and irresponsible” statements. Charamsa was immediately removed from his post at the Congregation for the Doctrine of the Faith, the Vatican’s doctrinal arm.

But the pontiff could have been referring to more recent tensions within the Vatican, with the publication of a letter sent to Francis by 13 conservative cardinals. The letter warned of plans by progressive synod bishops to change the church’s approach to family issues.

Speaking at the Vatican on Wednesday, British Cardinal Vincent Nichols said the letter “has not had the slightest effect on the progress of the synod.”

Lombardi said there had been “too much” discussion of the letter, while adding he would not be able to specify the scandals referred to by the pope.

There was speculation in Rome that the pontiff may also have alluded to the city’s administration, which the Vatican is relying on to push through urgently needed work ahead of the church's jubilee year, which starts in December.

Significant investment is needed to cope with the millions of pilgrims expected to arrive in Rome for the series of events during the holy year.

Rome is facing a power vacuum in the wake of the resignation of Mayor Ignazio Marino after a series of scandals believed by his supporters to be a smear campaign to get the left-wing politician out of office.

The pontiff unexpectedly commented on Marino last month, stating that the mayor, a supporter of gay marriage, “pretends to be Catholic.”

A further ripple from Rome followed accusations this month against a Rome friar, who allegedly paid for drug-fueled sex with homeless men.

Parishioners said they had assembled evidence about the friar's illicit activities and were furious to discover he had been transferred to another part of Italy instead of being disciplined, Reuters reported.