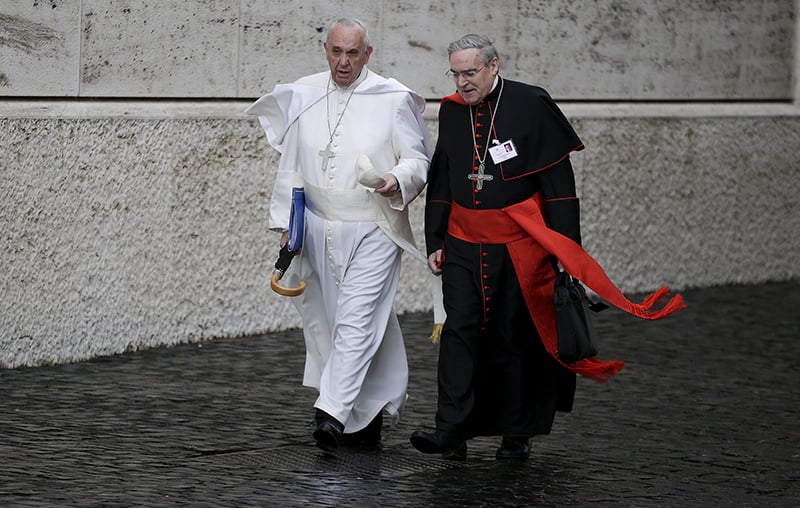 Pope Francis talks with Spanish Cardinal Lluis Martinez Sistach as he arrives to lead the synod on the family at the Vatican, on Oct. 10, 2015. Photo courtesy of REUTERS/Max Rossi *Editors: This photo may only be republished with RNS-SYNOD-LETTER, originally transmitted on Oct. 12, 2015.

VATICAN CITY (RNS) Tensions already roiling a high-level Vatican summit spilled into the open on Monday (Oct. 12) with the publication of a letter allegedly sent to Pope Francis from 13 conservative cardinals — including Cardinal Timothy Dolan of New York — warning of plots by progressives to hijack the proceedings.

In the letter, the senior churchmen said that if the reformers succeeded in changing the church’s approach to modern families it could send the Catholic Church down the path of Protestant denominations that abandoned “key elements of Christian belief and practice in the name of pastoral adaptation.”

But within hours of the letter’s release four of the cardinals denied having signed the letter. 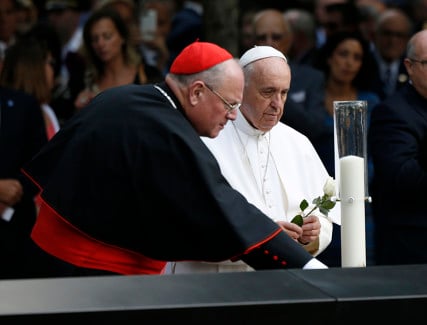 Pope Francis is accompanied by Cardinal Timothy Dolan as he places a flower after praying for the victims at the September 11, 2001 memorial in New York, on September 25, 2015. Photo courtesy of REUTERS/Shannon Stapleton *Editors: This photo may only be republished with RNS-POPE-INTERFAITH, originally transmitted on Sept. 25, 2015, and with RNS-SYNOD-LETTER, originally transmitted on Oct. 12, 2015.

Two other cardinals said they signed the letter but that its contents were somewhat different from the version that emerged Monday. Meanwhile, a spokesman for Dolan said the cardinal declined comment.

The outright denials — from the archbishops of Paris, Milan and Budapest, plus an Italian cardinal who works in the Roman Curia — and uncertainty about who signed what, raised questions about the legitimacy of the letter, which was published by an Italian Vatican watcher, Sandro Magister, a persistent critic of Francis.

The mystery also fueled intrigue about the three-week meeting, called a synod. It also spotlighted increasingly bold efforts by traditionalists to thwart any changes to church doctrine or practices, in particular proposals to allow divorced and remarried Catholics to receive Communion.

Under current policies, Catholics who remarry without an annulment are considered to be in an adulterous relationship and thus cannot take Communion.

The Communion issue — as well as efforts to make the church more open to cohabiting couples and gays and lesbians — has become a focus and flashpoint for the wide-ranging synod of 270 bishops from around the world.

The closed-door meeting opened on Oct. 4 and is just approaching the halfway point.

This fall’s gathering follows a previous synod that Francis convened here last October as part of his effort to foster dialogue within the hierarchy and to discuss possible reforms to pastoral practices (though not necessarily doctrines) that could make the church more welcoming and inclusive.

READ: No rest for a weary pope: Francis now faces a bigger test than US trip

Yet raising the specter of any change set off alarm bells for conservatives who have been lobbying fiercely, in public and behind the scenes, to ensure that the synod acts to remove any doubts about the possibility of changing church teachings or policies.

In recent months, and with growing intensity since the synod opened, conservatives have accused reformers of “rigging” the synod and of engaging in skullduggery and various media “manipulations” to achieve changes — charges the letter from the cardinals seemed to support.

“A number of fathers feel the new process seems designed to facilitate predetermined results on important disputed questions,” says the letter, which was reportedly given to Francis on Oct. 5, the second day of the synod, by Australian Cardinal George Pell, a top curial official and vocal opponent of reforms.

The letter reprises complaints that many bishops here have made: that the working document that is the basis of the discussions is flawed, that the bishops are trying to debate too many critical issues in too short a time, and that the group of 10 bishops picked by Francis to write a final summary report is skewed to the progressive side and instead should have been elected by the entire group.

But their main concern seemed to be the prospect that the synod could introduce changes to church teachings, especially on Communion for the divorced and remarried.

“If so, this will inevitably raise even more fundamental issues about how the Church, going forward, should interpret and apply the Word of God, her doctrines and her disciplines to changes in culture,” they said.

READ: African archbishop: We’re not blocking progress in the church

“The collapse of liberal Protestant churches in the modern era, accelerated by their abandonment of key elements of Christian belief and practice in the name of pastoral adaptation, warrants great caution in our own synodal discussions.”

All of them are prominent conservatives, and several have publicly taken issue with the reformist course of Francis’ papacy.

Napier told the Catholic news site Crux later Monday that the letter he signed focused only on concerns about the final drafting committee, though in that interview he also echoed the other concerns in the letter.

Pell also said late Monday that there were “errors in both the content and the list of signatories” of the letter that Magister released but he said the letter was private and “should remain private.”

Apparently the letter was delivered to Francis during the afternoon session on Oct. 5, when Pell reportedly complained to Francis, and in front of the entire synod, about the composition of the 10-member group writing the final report. 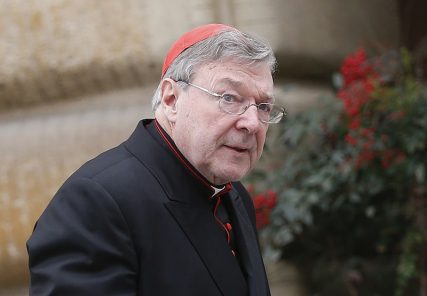 The next day Francis seemed to respond directly to Pell, delivering unscheduled remarks to the synod reminding the bishops that church teaching on marriage was not up for grabs.

The pope also confirmed that the processes put in place for the synod — brief addresses by each bishop to the entire gathering, plus work in small language groups and ending with debate over a final report that will synthesize their deliberations — remained valid and were the fruit of their own requests following last year’s synod.

That much was revealed during a press briefing the next day by Vatican officials.

But what the briefers did not say was that Francis had also warned the synod fathers against buying into “the hermeneutic of conspiracy” — basically, conspiracy theories. Such fears, the pope said, are “sociologically weak and spiritually unhelpful.”

It was only when another synod delegate revealed those quotable phrases on Twitter a day later (Oct. 7) that the Vatican then confirmed the pontiff’s warning about conspiracy fears — a delay that itself fed into even more conspiracy theorizing.

It all left Washington, D.C., Cardinal Donald Wuerl, an ally of Francis and a member of the committee charged with drafting the final report, exasperated.

“If you’re convinced this is all rigged, then you’re going to see that everywhere,” Wuerl told Crux.

“I think that was the single most powerful negative element as this synod opened, that there was an aura around fostered by a number saying this isn’t going to be a fair synod,” he said. “Everything looks yellow to the jaundiced eye.”

Still, the intrigue over the cardinals’ letter is only likely to ratchet up the speculation, especially among conservatives who are already convinced that Francis is leading Catholicism down the road to ruin.

“I’m one of countless commentators who has warned that holding this synod could split the church,” wrote The Spectator’s Damian Thompson, an especially tart critic from the Catholic right. “Now it’s happening, much faster than any of us anticipated.”