MARTHA’S VINEYARD, Mass. (RNS) Best-selling novelist and former foreign correspondent Geraldine Brooks readily acknowledges that religion keeps “popping up” in her work. Her new historical novel, “The Secret Chord,” focuses on the biblical King David “using imaginative empathy to fill in the gaps that Scripture leaves,” as she put it.

Brooks’ 2006 Pulitzer Prize-winning book, “March,” featured the absent father from the children’s classic “Little Women” and explored his experience as a minister during the Civil War.

Her 2008 novel, “People of the Book,” created an elaborate interfaith back story for a 600-year-old Jewish manuscript that survived the Inquisition, the Holocaust and the Bosnian War.

READ: Snapchat spirituality: How technology can be a force for religious good or evil

Brooks said she returns to religious themes because she is drawn to the human quest for meaning. “I’m fascinated by the questions,” she told the PBS television program “Religion & Ethics NewsWeekly.”

“I don’t have any answers, but I love looking at how human beings have grappled with these questions over time.”

In her own life, Brooks has been influenced by several religious traditions. She was born to an Irish Catholic family in Australia and attended Catholic schools from kindergarten through high school.

In her teens, she became disillusioned with the church over issues including the treatment of women and the teachings against birth control.

She said she was “traveling happily as an agnostic” when she came to the United States in 1982 for graduate studies in journalism at New York’s Columbia University. While there, she fell in love with fellow journalism student Tony Horwitz, who would also become a Pulitzer Prize-winning writer. The two married in 1984. Horwitz was Jewish, although very secular. He was not concerned about their religious differences. But Brooks was concerned because Judaism is passed down through the maternal line.

“I thought that given the recent history of the 20th century and what had happened to Jewish families in the Holocaust, that I could make a gesture towards that history by converting to Judaism so that our children would be Jewish,” she said.

At the time, her conversion was more about history than faith. But she said there are many aspects of Judaism that resonate with her, such as the emphasis on prayer. She offers frequent prayers to what she describes as “no fixed address.”

“Even though I am not at all sure that anybody is listening, I find that I have this compulsion to offer up little prayers,” she says. “In the Jewish tradition … [when] you notice something, you express gratitude for it.”

Brooks and Horwitz have two sons, Bizuayehu, who was adopted from Ethiopia, and Nathaniel. The family has a year-round home on Martha’s Vineyard, where Brooks enjoys the beauty of the local environment. They have several pets, including three alpacas they keep on their property. 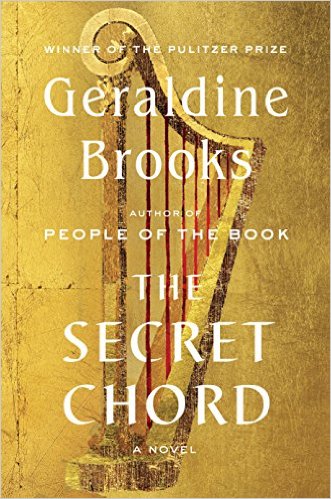 Brooks said she finds most of her inspiration in nature: “I don’t know if there is a literal creator, but I can love creation.”

The family attends the Martha’s Vineyard Hebrew Center, the only synagogue on the island. Brooks consulted its rabbi, Caryn Broitman, while writing her novel about David, especially when it came to conveying what she calls the “austere beauty of the biblical Hebrew.”

Brooks’ interest in David was ignited years ago when her oldest son declared he wanted to play the harp. Brooks thought about the boy-harpist in Scripture and started rereading his story. She was fascinated by David’s loves and battles and all the conspiracies over succession to the throne of Israel.

“I’m thinking, ‘Whoa, this is very Game of Thrones,’” she said with a laugh.

In “The Secret Chord,” David’s story is told through the eyes of the prophet Nathan, who often castigates the king. Brooks’ research sources included work by the late Jewish theologian Abraham Joshua Heschel about the Hebrew prophets.

“He says, ‘You know these are some of the most confounding and troublesome men who ever lived,’” she said, adding, “I’ve always been attracted to brave idealists.”

Some biblical scholars have speculated about the close friendship described in the Bible between David and Yonatan, or Jonathan, the son of Israel’s King Saul. In Brooks’ telling, the two have a sexual relationship. She points to a passage in 2 Samuel where David says: “Your love for me was wonderful, more wonderful than that of women.”

“And this was a guy who’s loved a lot of women,” she added.

Brooks’ David is a complicated man. She believes that is part of his appeal.

“He does embody the dark and the light of the human condition. That, I think, is one of the reasons that we’re pulled back to this story time and time again,” she said.

Brooks hasn’t revealed the topic of her next historical novel, but she admits there is a good chance it too will touch on religion.

“If you’re going to write about the past, you can’t ignore faith, because faith was in many ways the defining characteristic of so many lives,” she said. “So good luck not writing about it.”

(A version of this story was first broadcast on the PBS television program “Religion & Ethics NewsWeekly.”)