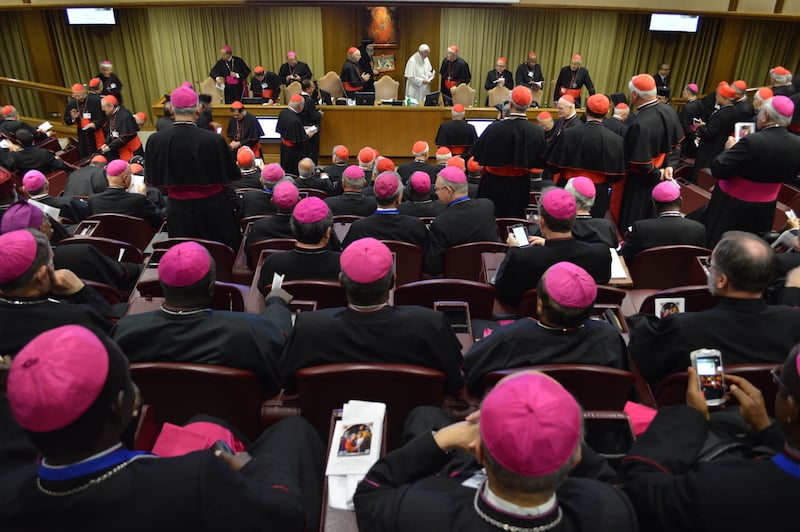 Bishops gathered at the Vatican for the synod on the family. Religion News Service photo by Rosie Scammell

VATICAN CITY (RNS) The morning prayer that starts each session of a major gathering of Catholic churchmen underway here is an important chance for the 270 cardinals and bishops from around the world to set a meditative tone for what are contentious debates about church teachings on sexuality and family life.

With Pope Francis leading the way, the prelates seated in a large Vatican lecture hall chant the traditional Latin prayers, pausing near the end for a brief reflection on the day’s Scripture by one of the bishops at the meeting, known as a synod.

Yet even that moment of spiritual peace is not always a sanctuary from the tensions roiling the three-week meeting that ends next Sunday (Oct. 25).

That was vividly demonstrated last Thursday (Oct. 15) when Tanzanian Bishop Renatus Leonard Nkwande used his homily to exhort the delegates to hold the line against pressures to be more welcoming to gay Catholics, or the divorced and remarried — two topics that will be the sharp focus of the synod’s final week.

The churchmen must avoid “turning vices into new human rights,” Nkwande said, speaking in English as the pope and others listened to his words rendered by a translator. “Who knows what will happen after approving same-sex relations. Are the same arguments for pastoral adaption in this issue, for example, not going to be valid on the other issues, like polygamy, polyandry, bestiality … and many others?”

READ: Pope Francis calls for changes to papacy and a more decentralized church

The Catholic Church must resist any temptation to “compromise the gospel and sacrifice the divine revelation” by seeming to approve of “strange views and new teachings,” he said.

The synod fathers continued with the prayer, and while a few later raised an eyebrow at Nkwande’s talk, it was evidence not only of the passion that many African church leaders are bringing to the proceedings, but also to the growing presence and profile of Africans in the hierarchy and in Vatican politics.

African Catholics overall account for 16 percent of the world’s 1.2 billion Catholic population, and that figure is rising rapidly; the 54 bishops from across Africa who are at this landmark meeting represent 20 percent of the synod’s voting delegates.

But they have an outsized influence because they largely stand against reforms to welcome gays and the divorced and remarried. They are not afraid to voice their views —  in often memorable ways — and they have allies among conservative Eastern European and U.S. churchmen at the synod.

“I think that in the past we’ve looked at them” — the African bishops — “as newcomers,” New York Cardinal Timothy Dolan told the Catholic news site Crux.

“(W)e’ve said, ‘Oh, isn’t it nice that we have them here as a minority.’ They’re not a minority anymore, these are not rookies … They’re not rookies on the ball club. These are people who have immense pastoral experience, who have a sense of the Church that has been tried by suffering and cultural opposition, and who now have a wisdom and an experience that I find breathtaking.”

Others, however, find the views expressed by many African bishops less than helpful. 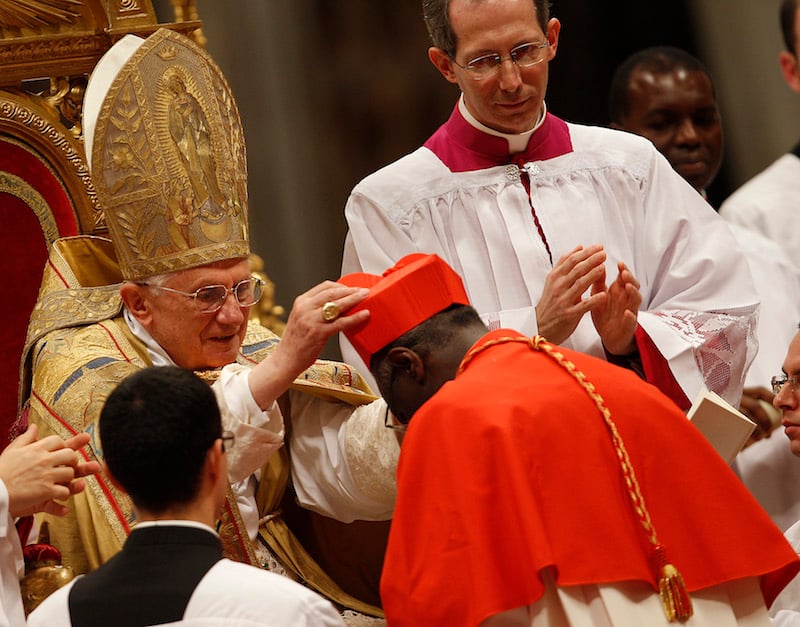 New cardinal Robert Sarah of Guinea receives the red biretta, a four-cornered red hat, from Pope Benedict XVI during the Consistory ceremony in Saint Peter’s Basilica at the Vatican November 20, 2010. Photo courtesy of REUTERS/Tony Gentile *Editors: This photo may only be republished with RNS-AFRICAN-SYNOD, originally transmitted on Oct. 19, 2015.

For example, Cardinal Robert Sarah of Guinea, a top official in the Roman Curia, made headlines in a speech equating gay rights and Islamic State terrorism, and comparing both to “apocalyptic beasts” that shared a “demonic origin.”

“What Nazi-Fascism and Communism were in the 20th century, Western homosexual and abortion ideologies and Islamic fanaticism are today,” Sarah said.

Even if stated in less volatile terms, resentment at what is seen as undue Western influence and even pressure on Africa is a recurrent theme from the African prelates.

Not only are they pushing back against what they see as a form of neo-colonialism by European and American churchmen, but they also argue that the growth of their churches — compared to steady declines in Western Catholicism — are the result of their adherence to old-fashioned values and the traditional doctrines of the church.

It is the African church that Europeans should be following today, they say, not the other way around.

“When the missionaries came to us, they made us change, in the name of Christianity, so many of our customs,” including polygamy and witchcraft, South African Cardinal Wilfrid Napier, named by Francis as a top official of the synod, told the Wall Street Journal last week.

“We did it, we’ve converted and find great joy and freedom in our Catholic religion,” Napier said. “And now are they coming in saying all that their predecessors taught us as being the essence of the faith — that’s all wrong.” 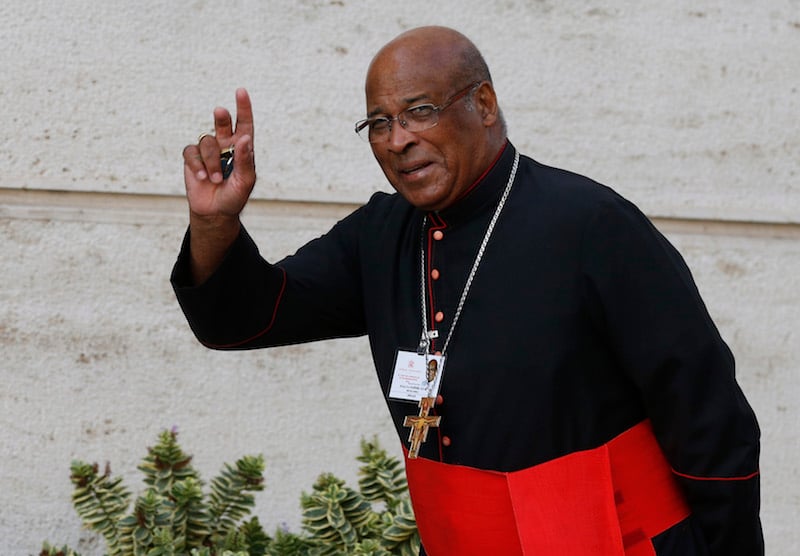 Cardinal Wilfrid F. Napier of Durban, South Africa, arrives for the morning session of the extraordinary Synod of Bishops on the family at the Vatican on Oct. 14, 2015. Photo courtesy of CNS/Paul Haring

Yet Western churchmen say that while they welcome and respect the African growth and contributions, the African way is not the only path for Catholicism, nor is it necessarily the best one for secularized countries.

Evidence of the tensions emerged at a synod held last October in Rome — the pope is trying to make these global dialogues an integral part of church life — when a leading German prelate associated with the reform camp, Cardinal Walter Kasper, was recorded by a conservative journalist making off-handed remarks about his African colleagues.

Issues like homosexuality are “taboo” for the Africans, Kasper said, adding that while the West shouldn’t tell Africans how to best run their church, the Africans “should not tell us too much what we have to do.”

Catholic conservatives made hay of the remarks, accusing Kasper of cultural insensitivity, even racism, and setting the groundwork for a major political fault line running through this month’s synod.

It is, in fact, this geographic and cultural — and doctrinal — fault line that runs through many churches.

Most notable is the worldwide Anglican Communion, whose leaders will meet in January to discuss loosening the Anglican Church’s global structure due to growing differences over homosexuality and female bishops. More than half of all Anglicans live in Africa, which gives the African church even more influence.

Here at the Vatican synod, Catholic leaders are committed to avoiding such a fate.

That’s why many bishops are trying to focus on the common ground between Western and African church leaders, especially over support for social justice issues, reform of the international financial system, the fight against global warming and the battle for human rights and on behalf of migrants.

Case in point: Ghanaian Archbishop Charles Palmer-Buckle, a delegate known for his moderating tone, insisted early on in the synod that the African delegation is not “blocking anything” at the synod and is “here to share what we have as a value to the greater good of the universal church.”

Yet Palmer-Buckle acknowledged the cultural gap, noting that it had “huge repercussions” in his West African country when Francis famously said of gay people, “Who am I to judge them if they’re seeking the Lord in good faith?”

But the archbishop told a media briefing that human rights and dignity of all people must be respected, and he asked for time and understanding for African Catholics on gay issues.

“It takes time for individual voices like that to be heard — when you are dealing especially with something that is culturally difficult for people to understand,” he said.

“And we are trying,” Palmer-Buckle continued. “I don’t want to say we have reached there. No, no, no — perfection is not yet something that we have obtained but we are working towards it.”

The question in the final week of the synod is whether the Africans and Western bishops — and the other camps — can meet somewhere in the middle on these and other issues, or even if there is a middle ground to reach.