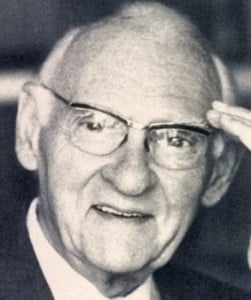 Going into the home stretch, there’s no doubt that the Synod of Bishops on the Family will be judged by what it has to say about Communion for the divorced and civilly remarried. Pope Francis and his allies want to allow it under a regime of penance, as proposed by German Cardinal Walter Kasper. Conservatives, led by the chief of the Vatican’s doctrine bureau, German Cardinal Gerhard Müller, really really don’t.

Outsiders like me have to work to understand the depth of the latter’s resistance to a proposal that would do away with the hypocrisy of many annulments and make possible full ecclesial inclusion of Catholics who are eager to be included. In his column yesterday, the New York Times‘ Ross Douthat, indulging fully in what Pope Francis has criticized as “the hermeneutic of conspiracy,” accused the pontiff himself of being the ringleader of a “Plot to Change Catholicism.” How to account for such an outburst from a conservative Catholic?

An explanation was pointed to last week by Archbishop Mark Coleridge, the good-humored Australian whose lively and candid blog posts on the Synod have made him its literary star. Coleridge has taken some pains to position himself as a middle-of-the-roader who wants to find some way of meeting the eucharistic needs of the divorced and remarried beyond the existing preconditions of securing an annulment of the first marriage or swearing off sex.

Nevertheless, in an interview with the National Catholic Reporter, Coleridge remarked, “I don’t think the synod is going to reject what is regarded as fundamental church teaching, by which I mean the untouchable trinity of marriage, Eucharist and the church. Because if you touch one of those three, you touch them all. This is not marginal stuff. It is fundamentally important.”

Now I’ve heard of the trinity of Father, Son, and Holy Spirit, solemnly defined as Christian doctrine by church councils back in the fourth century. But the trinity of Marriage, Eucharist, and Church? Where does its fundamental importance come from?

The answer is the 20th-century Swiss theologian Hans Urs von Balthasar. A Jesuit priest, Balthasar left the order rather than quit running a lay religious community he had established with his long-time friend and convert, the twice-married physician Adrienne von Speyr. Heavily influenced by Speyr’s mystical experiences, he linked marriage to Eucharist and Church in his magisterial five-volume Theo-drama, among other writings.

To be sure, Balthasar’s flights of mystical theology — what the Greeks call theologoumena — have deep roots. Perhaps no one has ever developed a more  profound and passionate spiritual interpretation of Eros than the 12th-century Cistercian St. Bernard of Clairvaux in his sermons on the Bible’s Song of Songs.

But unlike Bernard, Balthasar exalted the normal marital bond in a novel way for a religious tradition that had previously ranked virginity and celibacy as higher states. With the latter less and less valued in the wake of the Second Vatican Council, his approach was more and more appreciated by those in charge. In 1969, Pope Paul VI appointed him to the International Theological Commission and in 1988 Pope John Paul II named him to be a cardinal. (He died two days before the ceremony that would have given him his red hat.)

Since then, Balthasar’s influence has only grown. Before the first meeting of the Synod of Bishops on the Family last year, Cardinal Marc Ouellet, the former theology professor and archbishop of Quebec who heads the Vatican’s Congregation for Bishops, published Mystery and Sacrament of Love, a defense of traditional Catholic marriage doctrine based heavily on Balthasarian theology. (A second edition was brought out last month in anticipation of the Synod’s current session.)

Here’s a taste of Ouellet’s approach to the subject:

6. The nuptial eucharist model represents a development in that it furnishes resources for a richer, that is, a more biblical, personalist, and symbolic account of the participation of the Imago Dei [image of God], that is, man and woman, in God’s sacramental engagement in history. The sacrament of marriage and the sacramentality of the family thus receive new light and strength for their mission of incarnating in a proper, theologically grounded way the Church’s sacramental mission in the world.

7. All of this entails an enriched understanding of trinitarian anthropology culminating in a full appreciation of the ultimate meaning of human and Christian existence as service of God’s glory.

Put this kind of thing together with the doctrine of the indissolubility of marriage and suddenly the entire edifice of Roman Catholicism seems to depend on holding the line against Communion for the divorced and remarried. Wow.