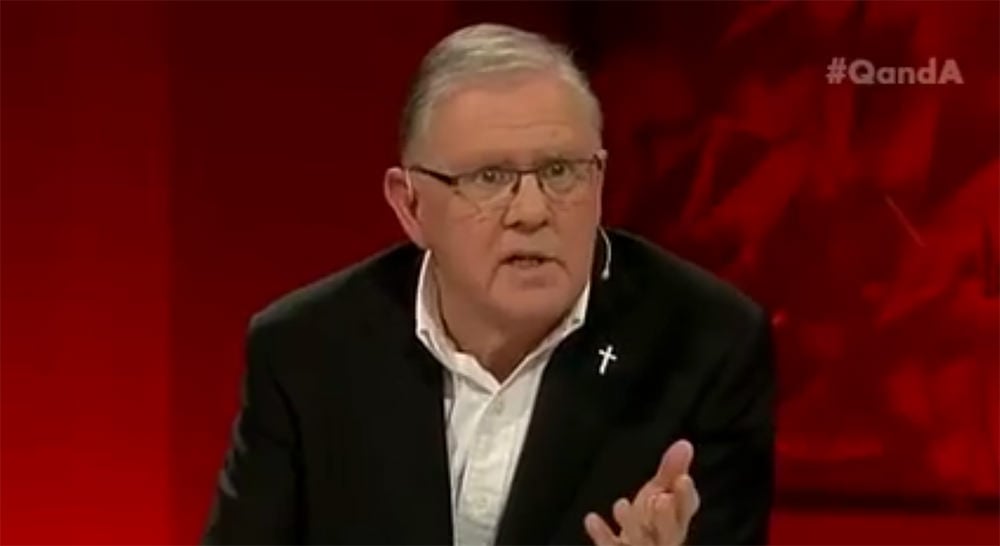 Heading into its second week, the Synod of Bishops on the Family looks like it will not endorse German Cardinal Walter Kasper’s proposal to enable some divorced and civilly remarried Catholics to take Communion. In an interview with the Boston Globe‘s John Allen, Australian Archbishop Mark Coleridge said he thought the bishops were opposed to the proposal by a 2-1 margin.

Coleridge himself is no dyed-in-the-wool conservative. He told Allen that it’s “just not in touch with reality to say there is no good” in second and same-sex marriages.

I understand that there’s no continuum between good and evil, but that’s all theory. The reality is, and any pastor knows this, that when you meet people in these relationships, it’s not black and white…There is a Catholic pathology sometimes of all or nothing. If it doesn’t conform to our ideal of what a marriage is, then somehow it’s nothing. It’s a Catholic absolutism.

Yet, he continued, “Personally, I don’t think I could find my way clear to support the Kasper proposal, even though in some ways I’m quite sympathetic to it.”

Why can’t he? Maybe he personally can’t get past the theory. Or he thinks it would tear the Church apart. Either way, his stance shows how profoundly Roman Catholicism is possessed by moral absolutism.

Eastern Orthodoxy, a no less ancient Christian tradition, is free of such “pathology.” Employing the patristic principle of economia, it acknowledges that there is a continuum between good and evil — that living in the world embroils human beings in inextricable mixtures of the two. Where Catholicism needs to divide all wars into “just” and “unjust” to the point of sanctioning some as holy, Orthodoxy sees them as sometimes necessary but always as bad things that require penance of the combatants.

Similarly, Catholicism takes the position that the doctrine of the indissolubility of marriage forecloses the possibility of second marriages — and hence Communion for those that civilly remarry — unless one of the spouses has died. Orthodoxy sees indissolubility as an ideal, but is prepared not only to admit divorced and remarried persons to Communion, but also to celebrate second and even third marriages in their churches (albeit in a penitential spirit).

However, using economia to solve the problem of the divorced and remarried in the Catholic Church was a non-starter at the Second Vatican Council, and it has remained a non-starter under Pope Francis. Cardinal Kasper has taken the position that the ban on Communion should be seen as a discipline rather than a doctrine. The idea is that while doctrines (like the Trinity) are not subject to change, disciplines (like clerical celibacy) are. Conservatives have responded that to lift the ban on Communion would be to destroy the doctrine of the indissolubility of marriage.

In fact, the distinction between discipline and doctrine is a theological rule of thumb that disguises a more complex picture of varying degrees of seriousness and definitiveness in Catholic teaching and practice. Disciplines can be and have periodically been changed by various competent church authorities. Doctrines can be and have been changed by church councils and popes — including the last few. (See my recent article on this subject over at Religion in the News.)

For its part, the indissolubility doctrine has itself never been solemnly defined as part of the Church’s unchangeable “deposit of faith.” Nevertheless, even Pope Francis’ public statement that the divorced and remarried are “not by any means excommunicated” does not seem to have persuaded a sufficient number of bishops to support a change in the church’s policy.

The fallback position for reformers now seems to be to allow diocesan bishops discretion to decide specific cases locally. That would be in line with Pope Francis’ recent decision to let bishops grant uncontested annulments within 45 days on their own say-so. It might not be a pretty solution, but at least it will allow some respite from the pathology.