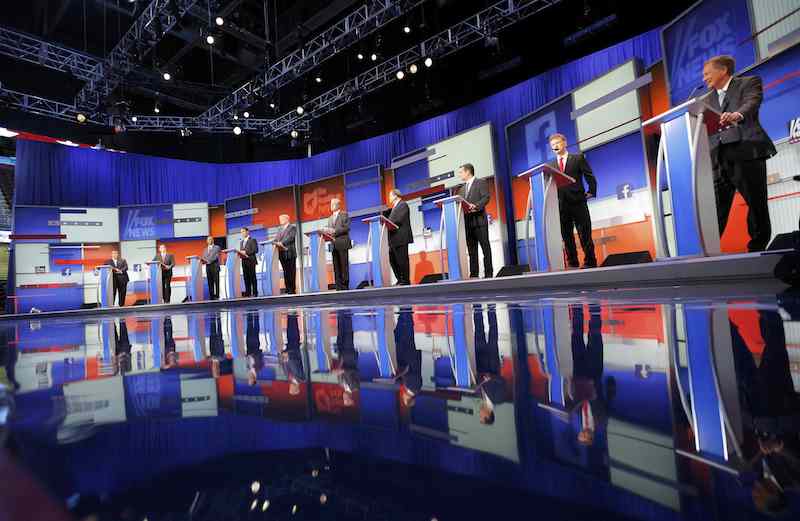 PLANO, Texas — From the multi-station cafeteria to the gift shop to the theater-style sanctuary, worshipers at Prestonwood Baptist Church believe — or hope — that next year’s election will see something new.

“So many don’t vote — it just makes me sick,” said Marjoray Wilemon, a retiree from Arlington, Texas, who has seen a lot of politics in her 94 years. “I hope that some people will realize what kind of bad shape we’re in.”

Like more than 6,000 others at the Prestonwood mega-church near Dallas, Wilemon had just watched six Republican presidential candidates appeal to evangelical, born-again Christians, including those who may have stayed at home in recent elections.

Estimates suggest there were as many as 17 million “missing” evangelical voters in 2012, though some political analysts question whether the potential number is that high.

Prestonwood pastor Jack Graham interviewed the six GOP candidates — Ben Carson,Carly Fiorina, Jeb Bush, Ted Cruz, Rick Santorum and Mike Huckabee — and said afterward that he is seeing “a surge of interest among evangelicals” ahead of the 2016 election.

“I sense there’s a renewed faith — a fervor if you will — to engage in the process,” Graham said following the event co-sponsored by the Faith & Freedom Coalition.

Ralph Reed, founder and chairman of the Faith & Freedom Coalition, told the crowd that evangelical Christians made up 27 percent of the electorate in 2012, a presidential year, and 32 percent of voters in the 2014 midterm elections.

Yet as many 17 million evangelicals stayed home in 2012, he added, an election in which President Obama beat Mitt Romney by some 5 million votes.

John Green, a political scientist at the University of Akron who specializes in religion and politics, is skeptical there are so many missing evangelical voters.

It all depends on how you define evangelicals, Green said. Turnout is already high among voters who strongly identify themselves as evangelical Christians, he said, and “to make the numbers big enough, you’ve got to include a wide diversity of people,” including voters who may not base their vote on religion or social issues.

In looking ahead to the 2016 presidential election, evangelicals are stressing traditional issues like abortion and the breakdown of the family. There are also relatively new concerns, including the Supreme Court decision sanctioning gay marriage and what religious voters see as threats to religious liberty.

Evangelical voters also tend to see foreign policy in more religious terms, leading to intense support for Israel and the U.S.-led battle against the Islamic State.

As Republican candidates addressed these and other issues at Prestonwood, religious voters said they are also looking at the candidates’ personal qualities, drawing a straight line between faith and public action.

Religious voters have many choices in the race for the Republican nomination. Most of the more than one dozen GOP candidates have made evangelicals a major part of their prospective coalitions.

Visitors to a Prestonwood gift shop could see a large display of the latest book by Carson, the retired neurosurgeon who is second to Trump in many polls. Many Prestonwood members said they knew about Carson well before he became a candidate.

Like Carson, Ted Cruz is also appealing to evangelical voters in Iowa, which opens election season with its caucuses in early February. Santorum and Huckabee are looking to rebuild the coalitions of religious conservatives who helped them win the Iowa caucuses in 2012 and 2008, respectively.

Trump, Bush and Fiorina are also looking to make inroads among evangelical voters who turn out in high numbers in Iowa and another key early voting state: South Carolina.

In the 2012 Iowa Republican caucuses, 57 percent of participants identified themselves as born again or evangelical Christians, according to entrance polls.

The percentage of born-again or evangelical Christians rose to 65 percent in South Carolina, which held the first Southern primary in 2012 and will do so again in February.

In the 2012 general election, meanwhile, 26 percent of the electorate identified themselves as white born-again Christians, according to exit polls.

Ivette C. Lozano, a Dallas doctor who attended the Prestonwood event wearing a red Ted Cruz shirt, said she thinks evangelicals “are going to be the decisive vote” in 2016 because of increased participation.

In the 2008 and 2012 elections, she said, “the evangelical Christians stayed at home” because they didn’t have a candidate they could support.

One potential danger: The religious vote in the primaries may push the Republican nominee too far to the right, making it harder to win moderate votes in a general election.

Paige Gilbert, 22, a student of public policy at the University of Texas at Dallas who likes GOP candidate Marco Rubio, said, “I think we need somebody who can compromise … I think the idea of compromise has been lost.”

Whoever emerges, Donna Byrd, a management trainer who lives in Carrollton, Texas, said she hopes Reed and others are right about all these potential new voters.

“I hope that what they said is correct and that we are influential,” she said. “If we’re not, we have nobody to blame but ourselves.”