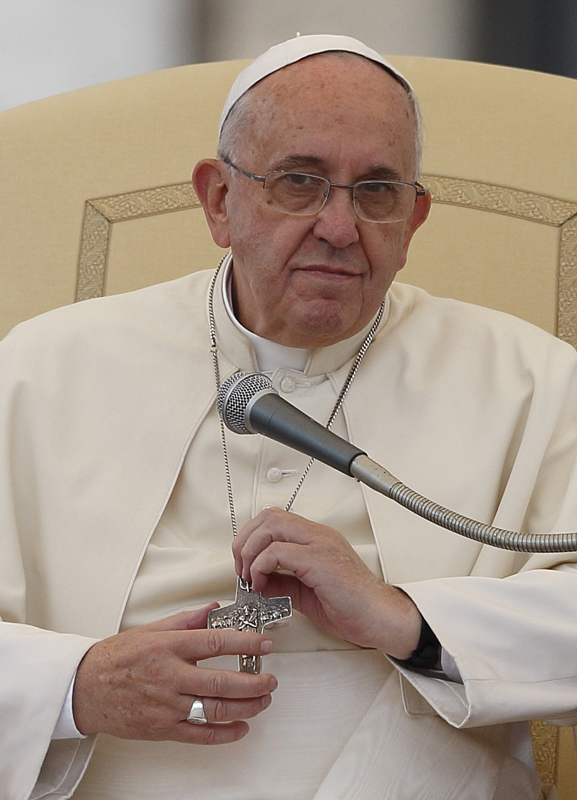 VATICAN CITY (RNS) The Vatican on Wednesday (Oct. 21) categorically denied a story from an Italian news agency that Pope Francis has been diagnosed with a brain tumor, calling the report “unfounded” and “seriously irresponsible.”

The brief and unsourced story was published late Tuesday on the website of Quotidiano Nazionale, or National Daily, which said only that a small tumor was discovered “months” ago and that no surgery would be required.

The scoop was quickly called into question, in part because the story provided so few details and because the Vatican has been swirling with rumors this month during an intense and contentious debate over church teachings among 270 bishops gathered for a global synod on the family.

The synod has featured unusually open arguments and no small amount of public sniping among churchmen, as well as revelations of a secret letter to the pope and accusations of behind-the-scenes “rigging” and “manipulation.”

Now add to that melodramatic mix this report about the health of Francis, who turns 79 in December.

“The spread of the totally unfounded news of the health condition of the Holy Father on the part of an Italian news agency is seriously irresponsible and not worthy of attention,” said the Rev. Federico Lombardi. “Also, as all can see, the pope continues to exercise his intense activity without interruption and in an absolutely normal way.”

In an even tougher follow-up denial, Lombardi called the report “a grave act of irresponsibility, absolutely inexcusable and unconscionable.”

“I am able to confirm that the pope is in good health,” Lombardi said in a statement he read out during a news conference on another topic.

He said he had checked directly with the pope and other Vatican officials. “No Japanese doctor has visited the pope in the Vatican and there have been no examinations of the type indicated in the article,” he said.

Francis has been participating daily at the three-week synod and has seemed in good health despite an intense and busy schedule.

In an interview with another Italian newspaper, the editor of National Daily, Andrea Cangini, said the Vatican denial was “understandable and expected.”

He stood behind the report and said the editors had debated among themselves about whether to publish the news and ultimately decided they had a responsibility to the public to do so.

According to QN, the papal helicopter was seen landing near Pisa several months ago, and Francis is said to have visited a Japanese doctor there, Takanori Fukushima, who is a specialist in brain tumors and aneurysms. Fukushima reportedly indicated no surgery would be required.

Lori Radcliffe, practice administrator for Fukushima at the Carolina Neuroscience Institute in Raleigh, N.C., described the report as “absolutely false.”

She told Reuters that Fukushima saw the pope and shook his hand alongside thousands of people this year at a general audience at the Vatican but had never treated or evaluated him.

The pope is visiting the towns of Florence and Prato near Pisa next month, but Lombardi said the papal helicopter had not been anywhere near there when the newspaper said it had.

“Maybe it was a ghost,” said Lombardi.