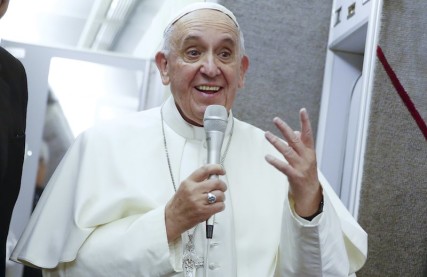 Pope Francis talks aboard the papal plane while en route to Italy on Sept. 28, 2015. Photo by Tony Gentile, courtesy of Reuters

VATICAN CITY (Reuters) – Conspiracy theories worthy of a Dan Brown novel sprouted in the Italian media on Thursday (Oct. 22), with accusations that Pope Francis‘ enemies were looking to undermine him after a newspaper reported he had a brain tumor.

The Vatican angrily denied Wednesday’s story, calling it irresponsible and inexcusable, but rather than fading out of sight, the saga has inflated into a cloak-and-dagger whodunnit.

“Who wants the pope dead,” the main headline in Il Giornale newspaper said. La Repubblica and La Stampa, both respected dailies, wrote of a “shadow of a plot” on their front pages.

Most papers concluded that the story was false. But rather than dismissing it as a journalistic error, commentators and churchmen in the land that gave the world Machiavelli, the master of political cunning, looked for hidden intrigue.

The common denominator was that the pope‘s foes within the Vatican and the Catholic Church want to weaken his authority as a pivotal meeting of world bishops on family issues nears its end on Sunday.

La Repubblica quoted Argentine Bishop Victor Manuel Fernandez as fearing a well-planned “apocalyptic strategy” against Francis by conservatives who want to destabilize the church and block his attempts to change it.

Leading political columnist Massimo Franco wrote in Corriere della Sera daily that the story was probably “hatched in the most murky Vatican underground and was aimed at de-legitimizing the pontiff.”

La Stampa called the saga part of a “calumny to block change.”

It all stemmed from a report in Quotidiano Nazionale that a Japanese doctor had secretly visited the Vatican in January to examine the pope and concluded that he had a benign tumor that could be treated without surgery.

The Vatican issued three detailed denials and the doctor, Takanori Fukushima, released a statement through his office in North Carolina that said: “I have never medically examined the pope. These stories are completely false.”

Fukushima’s office said he shook the pope‘s hand alongside thousands of people at a general audience, but nothing more.

Quotidiano Nazionale said on Thursday it stuck by its story.

But the Vatican’s own newspaper, L’Osservatore Romano, said the timing of “false news” was fishy. “The moment chosen unmasks an attempt to raise a cloud of dust in order to manipulate.”

“Some, both inside and outside the church, are nervous about the outcome of the synod,” said German Cardinal Walter Kasper, a progressive close to the pope.

“It’s clear that some people don’t like this pope … but the pope is in good shape and the attempt will be in vain,” he told Corriere della Sera.

Conservatives at the gathering oppose changes to doctrine on issues such as how to minister to homosexuals and divorced Catholics by showing more mercy and less condemnation.

The pope has said he wants to show more mercy without changing fundamental rules.