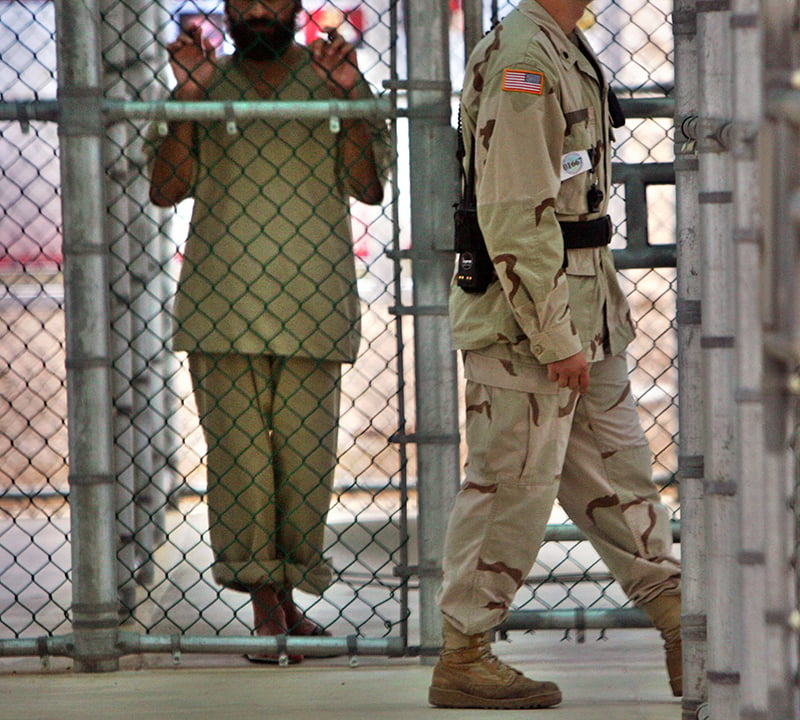 In this photo reviewed by U.S. military officials, a detainee whose name, nationality and facial identification are not permitted holds onto a fence as a U.S. military guard walks past the grounds of the maximum-security prison at Camp 5 in the Guantanamo Bay U.S. Naval Base on June 26, 2006. Photo courtesy of REUTERS

(RNS) How far does the U.S. military have to go to provide religious accommodations for locked-up al-Qaida terrorism suspects?

That’s the question before a military judge who is weighing whether female guards should be banned from touching detainees at Guantanamo Bay, Cuba.

Five of the military’s “high-value” detainees asked the judge Oct. 30 to permanently forbid women guards from touching the prisoners. Their Muslim traditions, they say, prohibit women other than their wives or relatives from touching them.

But the two female guards who sometimes shackle or escort the detainees say a ban on touching violates their equal employment rights. They have won support from members of Congress and the Obama administration who called the ban “outrageous.”

Some of them question how many accommodations should be made for the men who allegedly plotted the Sept. 11, 2001, attacks that killed nearly 3,000 people.

Among the defendants is Khalid Sheikh Mohammed, the suspected mastermind.

Other religious accommodations granted by the military commission during pretrial proceedings have included breaks during court hearings to allow the defendants to pray, access to the Quran, and halal-only meals in keeping with Muslim dietary restrictions forbidding pork. There are 114 detainees at Guantanamo.

Sen. Kelly Ayotte, a Republican from New Hampshire, said at a press conference after an Oct. 27 Senate Armed Services Committee hearing that “terrorists should not dictate what men and women can do when serving in the military.”

A military judge issued the original order in January banning female guards from touching or transporting the defendants. The detainees had refused to meet with their attorneys to protest the touching by the women, which threatened the legal proceedings.

The judge is trying to decide now whether to make the ban permanent.

During the Oct. 27 Senate Armed Services Committee hearing, Defense Secretary Ashton Carter denounced the ban, saying, “I think it is counter to the way we treat service members, including women service members, and outrage is a very good word for it.”

The judge has not set a date for his ruling on whether to make the touching ban permanent. 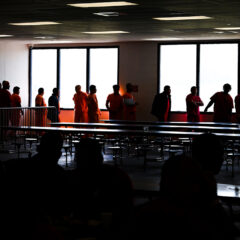 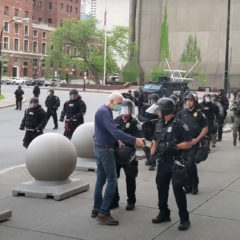