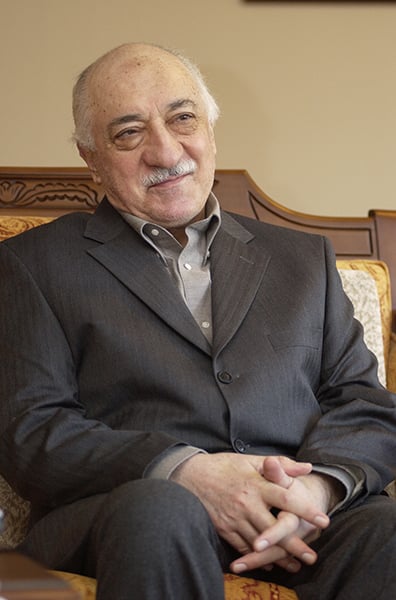 Since 1999, Turkish cleric Fethullah Gulen has lived in relative obscurity at a compound in rural Pennsylvania’s Pocono Mountains, where this photo was taken on March 3, 2004. Photo by Selahattin Sevi

WASHINGTON — A Turkish religious movement has secretly funded as many as 200 trips to Turkey for members of Congress and staff since 2008, apparently repeatedly violating House rules and possibly federal law, a USA TODAY investigation has found.

The group — a worldwide moderate Islamic movement led by a religious scholar named Fethullah Gülen — has been accused by the Turkish government of attempting a coup in that country. Turkish leaders have asked the United States to extradite Gülen from the remote compound in rural Pennsylvania where he has lived for 20 years.

The movement has founded hundreds of charter schools across the United States and around the world, has its own media organizations, and was deeply entrenched with the Turkish regime until a falling out two years ago. That led President Recep Tayyip Erdogan to declare Gülen was running “a parallel state” inside the country with the intent of undermining the government. In advance of Turkish elections this weekend, police raided the offices of Gülen affiliated-media organizations..

A dozen different Gülen groups have sponsored congressional travel since 2008 and have filed forms with the House certifying that they were paying for the trips. The House Ethics Committee approved all the trips in advance based on the forms the Gülen groups submitted.

But an investigation found many of those disclosures were apparently false. Some of the Gülenist groups claimed to be certified nonprofits, but they do not appear in state or IRS databases of approved charities. Groups that did register with the IRS filed tax forms indicating that they did not pay for congressional travel. And five of the groups admitted to congressional investigators earlier this year that a Gülenist group in Turkey was secretly covering the costs of travel inside Turkey for lawmakers and staff. 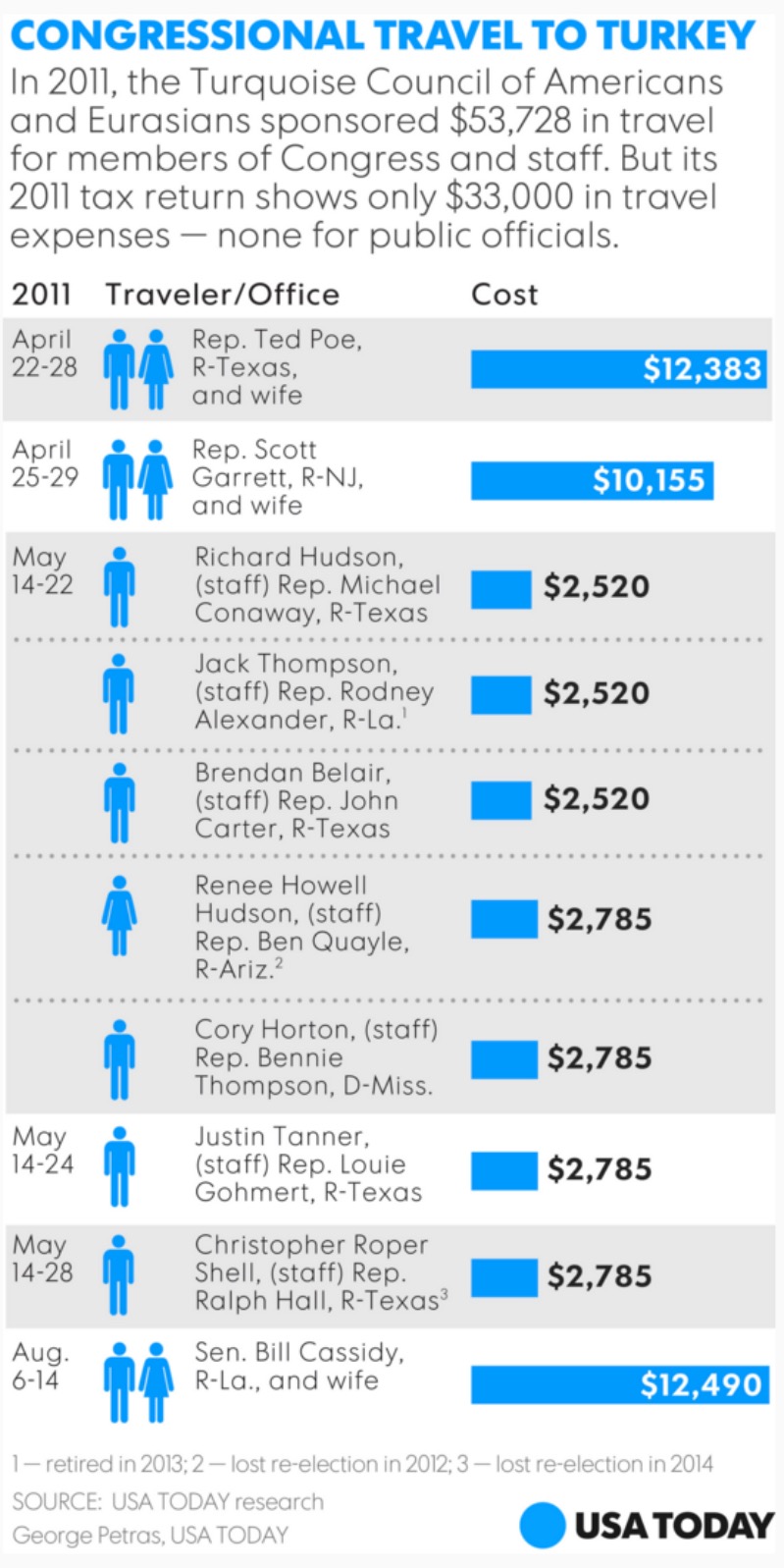 Congressional disclosures show the Gülen-backed trips totaled more than $800,000 in free travel for lawmakers and staff. That number likely underestimates the costs since many of the in-country expenses were not reported. And it is not at all clear where the $800,000 came from, since many of the groups involved do not appear to have the resources to pay for large delegation trips.

One Gülen group, the Texas-based Turquoise Council of Americans and Eurasians, sponsored trips for three lawmakers and seven staff members in 2011, filing disclosures claiming it was the sole sponsor of the trips at a total cost of about $54,000. But the same organization filed an IRS tax form that year claiming it spent only $33,000 on travel with no expenditures for the travel of public officials.

The network of Gülen organizations is hard to untangle. The BBC reported in 2013 “the movement’s influence extends far beyond Turkey, funding hundreds of Islamic schools, and think tanks and media outlets, from Kenya to Kazakhstan. It has attracted millions of followers and billions of dollars.”

In August 2013, Rep. Mike Honda, D-Calif., took an eight-day trip to Turkey sponsored by the Pacifica Institute, which claimed on congressional disclosure forms to be an IRS-recognized non-profit covering the $5,700 cost of the trip. But the IRS has no record of Pacifica being a recognized non-profit.

“Congressman Honda quite simply took a trip that was entirely approved by the House,” said spokeswoman Lauren Smith.

In April 2011, the same group filed forms with the House Ethics Committee to sponsor two separate trips. In one form, for a trip by then-congressman Bob Filner, D-Calif., Pacifica Institute claimed to be a subsidiary of a group called Global Cultural Connections. In another batch of forms filed for a trip by a handful of congressional staff, Pacifica declared itself to be a part of the West America Turkic Council. Both of those groups are registered with the IRS as non-profits, but neither reported any expenses for lawmaker travel on their 2011 and 2013 tax returns.

A 2008 cable from the U.S. embassy in Turkey released by Wikileaks describes Pacifica Institute as the “sister organization” of a Turkish-based group called the Bosphorus-Atlantic Association of Cultural Cooperation and Friendship, known by its Turkish initials BAKIAD.

The House Office of Congressional Ethics issued a report earlier this month finding that BAKIAD had secretly funded the Turkish leg of a trip to Azerbaijan taken by 10 members of Congress and 32 staff. Four of the Gülen groups sponsoring that trip “used BAKIAD to arrange and finance all in-country expenses for congressional travel in Turkey,” OCE found. “Importantly, however, BAKIAD’s role does not appear to have been disclosed to the Committee on Ethics in 2013 or in other years. BAKIAD was established in 2006 to oversee and coordinate trips and events related to North America,” and it has sponsored thousands of U.S. travelers ranging from state, local and federal officials to priests, teachers and other community leaders.

“There is a substantial reason to believe that BAKIAD, because of its role as an undisclosed sponsor of congressional travel, provided gifts in the form of impermissible travel expenses to congressional travelers in violation of House rules and regulations,” the OCE report concluded.

In June 2012, a Gülen organization called the Istanbul Center sponsored a nine-day, four-city Turkish visit for Rep. Mo Brooks, R-Ala., his wife, Martha, and four staff members for a total of about $23,000. The disclosure forms submitted to the Ethics Committee said the Istanbul Center is “a unit of the Global Spectrum Foundation.”

The forms explained that BAKIAD “funds trip and finds sponsors/donors for meals, lodging, domestic travel.” But there is no indication who those donors or sponsors were. Istanbul Center is not on file with the IRS as a recognized nonprofit; the tax form filed by Global Spectrum Foundation for 2012 shows no expenses for travel.​

“The Committee on Ethics takes responsibility for trip approvals and we trust it will appropriately handle any issues they find with information reported to them by the trip sponsor,” said Brooks spokeswoman Lauren Vandiver. “Congressman Brooks and his staff have no personal knowledge of anything of substance about how the trip was paid for inasmuch as they deferred that issue to the Committee on Ethics for review, research and ‘getting it right’.”

Repeated efforts to reach the Gülen organizations mentioned in this article, including dropping by the Washington headquarters shared by several of them were unsuccessful.

Only the Istanbul Center responded. Academic Affairs Director Mustafa Sahin said, “I did not organize any trips with members of Congress and staff, and do not really know how financial aspects of such trips were handled.” Other staff from that time period are no longer with the organization, he said.

USA TODAY identified 214 congressional trips sponsored by Gülen organizations that appear to be improperly disclosed. The trips generally have similar itineraries, with visits to the same historical sites, and visits primarily with Gülenist journalists, lawmakers and business associations.

And the movement has clearly benefited from making friends in Congress.

In February 2015, Rep. Matt Salmon, R-Ariz., organized colleagues to send a letter to Secretary of State John Kerry seeking his help in defending Gülenist journalists who had been arrested by the Turkish government as part of the battle between Gülen and Erdogan.

“We strongly urge you to reach out to President Erdogan and his administration to encourage a peaceful and appropriate resolution to these cases,” the lawmakers wrote. Salmon had taken a Gülen-funded trip to Turkey in 2014; Honda, Brooks and five other lawmakers who had taken Gülen-funded trips also signed the letter, as did 23 members who had approved Gülen-backed trips for their staff.

“Our trip was both fully disclosed and fully vetted by the House Committee on Ethics before the Congressman took it,” said Salmon spokesman Tristan Daedalus. “There was widespread coverage in the American press about the Turkish government’s unacceptable actions to silence opposition media,” Daedalus said, “and before he went on the trip you mentioned, he had already met with the Turkish embassy to discuss the imprisonment of numerous individuals trying to exercise their right to free speech.”

Nobody in Congress is likely to face penalties for accepting improper travel. The Ethics Committee concluded in July after reviewing the 2013 Azerbaijan trip that “all of the Members and staff who went on the trips did so only after getting Committee approval to accept the trips. Neither the Committee nor OCE found any evidence of any knowing violation by any Member or House staffer.”

However, “both the Committee and OCE found evidence suggesting that a number of parties outside the House may have affirmatively lied to and/or withheld information from both the Committee and the House Members and staff who were invited.” The committee therefore announced it was “referring the matter of third parties apparently engaging in a criminal conspiracy to lie to Congress to the Department of Justice for such further action as it deems appropriate.”

“It strains credulity to believe members of Congress and their staff would accept lavish junkets having no idea who actually sponsored the trips,” said Anne Weismann, executive director of Campaign for Accountability, an ethics watchdog group “Even worse, the Ethics Committee is allowing members to hide behind its so-called approval process so they can take exotic vacations paid for by special interests.”