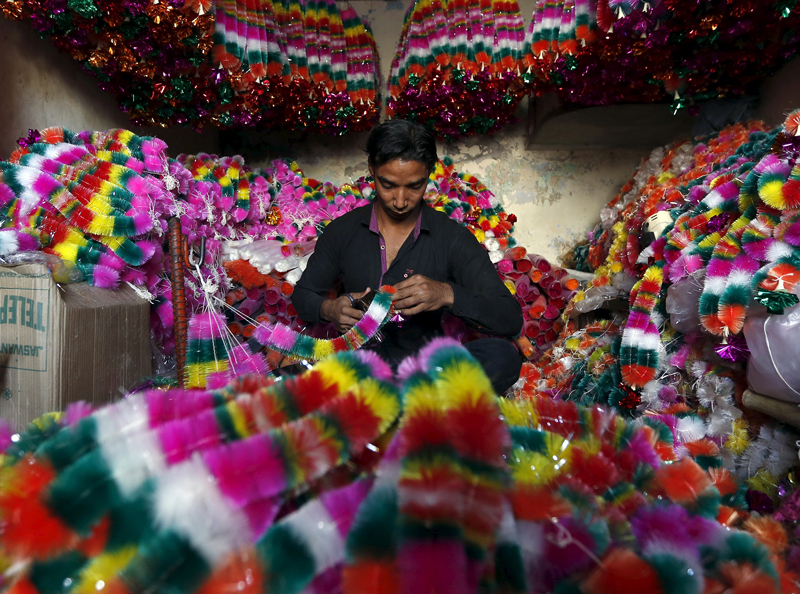 A vendor makes artificial garlands for sale inside his shop ahead of the Hindu festival of Diwali in Ahmedabad, India, on Oct. 29, 2015. Flowers are offered to Hindu gods and goddesses on the occasion of Diwali, the annual festival of lights that will be celebrated across the country on Nov. 11. Photo courtesy of REUTERS/Amit Dave
*Editors: This photo may only be republished with RNS-MENON-COLUMN, originally transmitted on Nov. 9, 2015.

(RNS) My parents came to the United States in the 1970s, from Kerala in south India.

At the time there were very few South Asians living in this country, and as a child, I remember celebrating Diwali in our home or in the homes of family friends because there was not enough of a Hindu population for large-scale community gatherings.

We now have sizable South Asian communities all across the country and celebrating Diwali, as well as the Sikh festival of Bandi Chhor Divas, is becoming routine in this country. Both holidays fall on Wednesday (Nov. 11).

Still, it took coming to the U.S. to get to know a faith from my parents’ native country.

READ: Muslim-majority city council may be 1st in USA Parvinder Singh reads from the Guru Granth Sahib, the holy book of Sikhs, at the Gurdwara Sahib, a Sikh temple in West Sacramento, Calif., on Aug. 6, 2012. Photo courtesy of REUTERS/Max Whittaker
*Editors: This photo may only be republished with RNS-MENON-COLUMN, originally transmitted on Nov. 9, 2015.

My first visit to a Sikh house of worship (called a “gurdwara”) came relatively recently. I visited the gurdwara in Richmond Hill in Queens, N.Y., which is home to one of the largest Sikh populations in the U.S.

I was unsure how it might compare to the Hindu culture with which I was familiar, and when I walked in, I was struck by some of the major differences in practice.

Men and women sat together on the floor, which I would later learn symbolizes equality.

We were asked to cover our heads. I borrowed a headscarf at the gurdwara before participating in the service.

Near the end, I recall seeing people bringing in flat, brown boxes. I craned my neck to get a better look, expecting to see another traditional ritual.

I soon realized I was looking at nothing more than pizza boxes. I felt a wave of familiarity — and also a bit silly. In a sense, we were nothing more than a group of friends sharing a pizza on a Saturday night!

READ: The ‘Splainer: What makes the cow sacred to Hindus?

Seeing the pizza boxes in an unfamiliar setting helped me understand that we are more alike than we realize. Let us keep that in mind as we head into the holiday season.

More than a billion people around the globe — nearly a fifth of the world’s population — are preparing to celebrate the festivals of Diwali and Bandi Chhor Divas.

These events hold special significance for South Asian religious communities, including Hindus and Sikhs. They also have increasing meaning in our national landscape, especially when we consider recent studies, which project Asians will become the largest immigrant group in the U.S. by 2065.

President Obama has acknowledged both Diwali and Bandi Chhor Divas every year of his presidency.

To Hindus who observe Diwali, the event draws from the triumph of good over evil. Hindus share stories from mythology that speak to this concept, such as the story of the Hindu god Rama and his wife Sita returning to their kingdom after defeating the demon king Ravana. In traditional practice, Hindus light rows of clay lamps to represent the power of light to overcome darkness.

The date of Diwali coincides with Bandi Chhor Divas, which is recognized by Sikhs around the world. It is on this day that the sixth of the Sikh gurus, Guru Hargobind, attained freedom after being unjustly imprisoned by Mughal Emperor Jahangir.

When offered his freedom, Hargobind insisted he would not leave until the king agreed to free others who were also wrongly imprisoned. On this day every year, Sikhs pause to honor the values of freedom, service and justice.

READ: Military judge to rule on whether to ban female guards from touching Muslim detainees 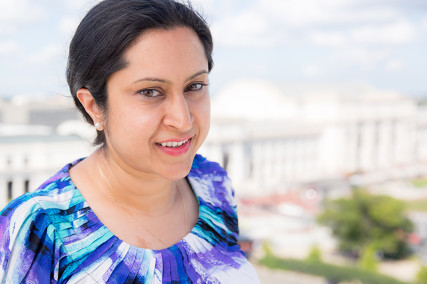 My visit to the gurdwara that day showed me that there are differences among our religious communities, yet there are many aspects we share. The beauty of the Sikh tradition and the warmth of the people spoke a universal language.

By putting myself in the position to learn from the Sikh community, I as a Hindu was able to better appreciate the unique traditions of Sikhs while also recognizing our shared humanity.

This, I believe, is a step that all Americans can and should take. As the ethnic and religious landscape continues to evolve in this country, each of us has the responsibility to learn about one another’s unique traditions. Doing so will help us better appreciate each other and therefore help us create more vibrant and accepting communities.

(Sue Menon lives in Queens, N.Y., and serves as a volunteer advocate with the Sikh Coalition.)