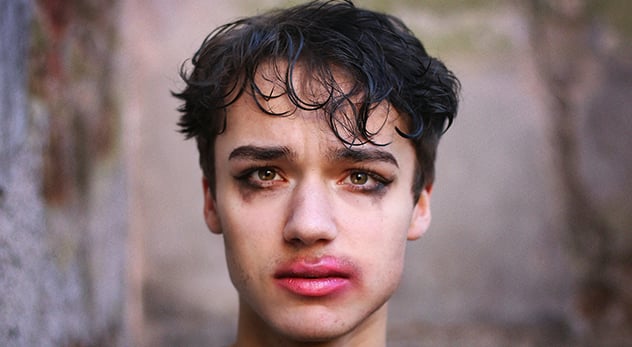 When trying to understand transgender issues, Christians should start with the personal, not political. Here’s a primer for believers to think about these matters more deeply. – Image Credit: “The Plight of the Transgender” by Rose Morelli (http://bit.ly/1kNb1TS)

In the American culture wars, almost anything can become fodder for a fight. Even bathrooms have become battlegrounds.

In Houston, Texas, an “equal rights ordinance” failed to garner the votes it needed last Tuesday. The controversial legislation sought to ban discrimination based on more than a dozen classes of people, including gender identity and sexual orientation. It was dubbed the “bathroom bill” because critics said it would to offer any person access to a public bathroom whether intended for men or women. At issue, according to supporters was protection for a particular kind of citizen: transgender people.

This is not the first time transgender people and bathrooms have made the news. A Portland High School added unisex bathrooms in 2013 to accommodate transgender students. Another student in Colorado also won the right to use a female bathroom despite being born biologically male by citing transgender identity. A similar student in Maine also found success in court on the matter of bathroom access. Critics of these cases cite the safety of women and children in bathrooms where “men” have access and claim that this is much ado about nothing considering that transgender people comprise an estimated .3 percent of the population.

Christians–particularly those of the more conservative variety–often oppose accommodations like this for transgender persons. But these believers are having a very important conversation in the wrong direction. [tweetable]When trying to understand transgender issues, Christians should start with the personal, not political.[/tweetable] When Christians begin by committing to political goals rather than educating themselves on the complicated, sensitive nuances of this matter, they often come off looking privileged, mean, or just flat out clueless.

READ: “Transgender issues are more complicated than some Christians assume”

But transgender issues are bigger than so-called “bathroom bills” and similar legislation. Thanks to people like Caitlyn Jenner and the award-winning show “Transparent,” these debates are penetrating American entertainment. And scores of books on the matter are hitting the marketplace. Expect this to be a big point of cultural conversation for years to come as society begins to see these issues as personal matters that affect the real lives of real people with real hurts.

A few Christians out there are thankfully trying to think deeply about transgender people, and I decided to bring a couple of them to this table. Mark Yarhouse is professor at Regent University School of Psychology and Counseling and author of “Understanding Gender Dysphoria: Navigating Transgender Issues in a Changing Culture.” Megan DeFranza is a visiting researcher at Boston University’s School of Theology and author of “Sex Difference in Christian Theology: Male, Female, and Intersex in the Image of God.” Here we discuss the complexity of transgender issues often overlooked by Christians.

MY: When people refer to sex they are typically thinking of the distinction between male and female and referencing chromosomes, gonads, sex hormones, internal reproductive anatomy, and external genitalia. When discussing gender, people are talking about the psychological, social, and cultural aspects of being male or female. Gender role refers to cultural expectations for maleness and femaleness.

RNS: Megan, what is intersex and how many people fall into this category?

MD: Intersex refers to a variety of physical differences where people have male and female characteristics—XXY chromosomes or internal reproductive organs of one sex with external sex characteristics of the other, for example. They sometimes result in ambiguous genitals so that doctors are not sure whether to assign the sex of male or female on the birth certificate but other times differences show up later in life—in early childhood or at puberty. Physicians often use the term Disorders of Sex Development (DSDs) but many within the intersex community prefer “Differences” of Sex Development—a more neutral term.

RNS: Megan, I’ve heard some conservative thinkers root their thinking in the Genesis passage that says “[God] made them male and female.” Do intersex people challenge the traditional interpretation of that verse?

MD: I used to say this myself—so I can relate with these conservative thinkers. But then I took a look at what Jesus says about Genesis and intersex folks in Matthew 19:12. I saw that Jesus didn’t speak of intersex as a problem or as a result of sin. Jesus speaks of three kinds of eunuchs: naturally born eunuchs (a category into which some intersex conditions fit), those who have been made eunuchs by others (a common occurrence in the Ancient Near East), and then praises those who “make themselves eunuchs for the sake of the kingdom.” It was pretty radical and took the church fathers centuries to convince us not to take Jesus literally (as many early Christians did) so that we now read that passage through the lens of monasticism.

Then I looked at Genesis again (keeping in mind Jesus treatment of folks who don’t fit into the category of Adam and Eve) and I realized that there are many creatures which are not named in the creation accounts which we do not consider “results of the fall into sin.” Amphibians—hybrid animals that are “creatures of the sea” and “creatures of the land”—are noticeably absent. Genesis 1 is a theological account of beginnings that was never intended to give us the whole story. Thankfully, we find help in other parts of the Bible to put together with this good beginning for a more complete picture.

RNS: What do you think, Mark? There are many people in the world who are biologically neither completely male nor female. How does this challenge a binary framework for understanding gender with rigid categories?

MY: I think there are many exceptions to an absolute male/female binary—intersex conditions, such as congenital adrenal hyperplasia, for example. Where I think people may disagree is whether such exceptions to the binary are indicative of a spectrum intended from creation or whether they are a result of living in a fallen world.

READ: “Give Anne Lamott (and the rest of us) a little grace on transgender issues“

RNS: As you know, Mark, many Christians look at those who wrestle with their own gender identity and feel they are merely “choosing” their own category. But you emphasize that gender dysphoria is likely not a decision someone makes. Explain.

MY: I have not met anyone who chose to experience gender dysphoria. The people who see a mental health professional often experience significant gender dysphoria—it can exist along a continuum of intensity—and their distress is often what they are trying to manage through various coping strategies and cross-gender identification, dress, or behavior.

RNS: How does the Bible speak to gender dysphoria, Mark?

MY: I think the most frequently cited biblical passages are in the Old Testament—passages that forbid wearing clothing of the other sex. The Evangelical Alliance Policy Commission looked at those passages and drew the conclusion that they are far too often turned to in an overly simplistic manner. I think they actually use the phrase “ethical cookbook” to characterize how people often use those passages. It’s unclear to me how each of these passages directly applies to gender dysphoria. There are enough passages and themes throughout Scripture that give me pause when I think of the most invasive procedures, but I am not prepared at this moment to rule those steps out for those in great distress.

RNS: One of those invasive procedures, Mark, is gender reassignment. You believe that while this should not be a first step, it can be advisable in some cases. Talk about this.

MY: I tend to think of the person diagnosed with gender dysphoria as trying to find a way to manage or resolve the dysphoria. Those management strategies reside along a continuum. You can imagine a biological male who experiences gender dysphoria managing the dysphoria by growing out his hair or wearing light makeup. Another person may wear more androgynous attire. Others may cross-dress intermittently to manage their distress—maybe on weekends. Others may pursue hormonal treatment. Still others may pursue gender reassignment surgery. I think we focus almost exclusively on the surgery, but that is not the most common intervention or resolution.

One Christian who is gender dysphoric told me recently: “The secular answer is to transition. The Christian answer is healing through counseling. But the reality is that most of us live with it each and every day, and it is just difficult.” I try to help people manage their dysphoria in the least invasive way, which is actually what many people are trying to do on their own.

RNS: Let’s get personal, Megan. You encourage listening to and learning from intersex people. What can they teach us that we might otherwise miss?

MD: [tweetable]Intersex persons have come out of the closet to work against shame, secrecy, and unwanted surgeries.[/tweetable] Their stories teach us that even doctors and parents with the best intentions who are trying to “fix them” have gotten it terribly wrong—creating medical problems where there were none before physicians intervened. Intersex persons also come in as many varieties as everyone else. Some are culture warriors. Others simply want to live their lives, be known and loved by friends and family, and not be harassed or mistreated because of their differences. Like many minorities, they remind us not to think that because we have heard one person’s story or met one intersex person that we know all we need to know. They call us to listen.

RNS: Mark, give one piece of advice that would help American Christians most improve their witness on gender issues.

MY: Christians often ask me what they should say to a transgender person–who may also be a Christian, by the way—this is obvious but should be said–if they come to their church or if they develop a sustained relationship with them. I encourage Christians to say something like this: “I feel like I’m meeting you at about chapter 6 or 7 of your life. I haven’t had the opportunity to hear about chapters 1 through 5, and I’d like to.” I guarantee that the transgender person who has come to your church would not expect a Christian to say that or to offer to listen to them.