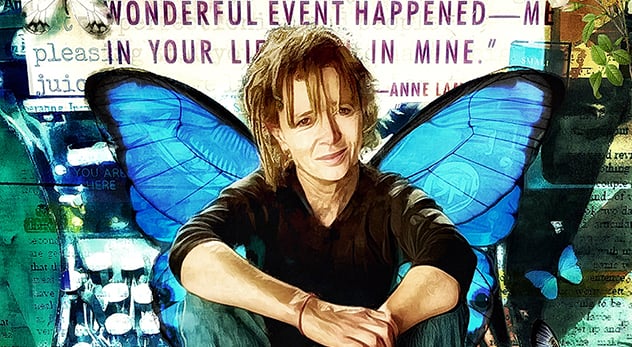 Bestselling author Anne Lamott incited public outrage by making offensive comments about Caitlyn Jenner. Jonathan Merritt asks, “Can we not offer each other a little grace in such a moment?” (Image credit: Carolyn Hall Young – http://bit.ly/1JOC1Lt)

“I worry that Jesus drinks himself to sleep when he hears me talk like this.”

You’ll find these words on page 170 of Anne Lamott’s iconic book about the craft of writing, Bird By Bird. But she could have spoken them in response to her comments about Caitlyn Jenner this week.

On Twitter, the New York Times bestselling author of books such as Grace (Eventually) and Traveling Mercies confessed to being “a tiny bit tired of Caitlyn” while repeatedly using male pronouns to describe the transgender woman who has dominated recent headlines. Lamott added that she “will call him a she when the pee-pee is gone.”

Unsurprisingly, Lamott’s words sparked widespread condemnation on social media, but some outlets went further. A writer with Philadelphia magazine accused her of being transphobic, and the Daily Kos said she was bigoted. Lamott later apologized to transgender people and the parents of transgender children.

Even so, a couple of ignorant comments do not erase Lamott’s long history of defending marginalized people. And they certainly do not turn her into a transphobic bigot. They merely remind us that when people with limited knowledge begin to engage complex issues, those people often misspeak and misstep. Limited knowledge combined with a public platform often equals an embarrassing blunder.

American culture — and faith communities in particular — are in the first stages of serious conversations about transgender issues. Can we not offer each other a little grace in such a moment?

I know how Lamott feels. Upon first seeing Caitlyn Jenner’s picture on the cover of Vanity Fair, I tweeted, “The person formerly known as Bruce Jenner is now [a] woman named Caitlyn.” Many of my Twitter followers quickly informed me that the comment was not phrased in the most sensitive way. Some claimed that I shouldn’t have used Caitlyn’s “dead name,” a phrase I had never encountered before. Though I didn’t fully understand the protests, I apologized and asked for grace, explaining that “I was trying to do my best to contextualize” with “no disrespect intended.”

As a society, we must learn to restrain our anger when an uninformed person speaks in an uninformed way. Would you get angry with a first grader for not knowing how to do long division or conjugate a verb? Would you get annoyed with a pig-tailed toddler for not being able to lift a cast iron skillet over her head? Would you grow frustrated with an infant who could not pronounce “Worcestershire.” Of course, not. The problem is not that they lack moral fiber or will. Rather, their minds, muscles, and mouths are simply not yet prepared for such tasks.

“Trans life is so outside pop culture, and my moms small town life,” Lamott’s son, Sam, later explained via Twitter. He also said, “I know. It’s shocking. When the adrenaline wears off, remember that before you knew about trans issues, you didn’t know.”

[tweetable]There is a difference between those who have not learned and those who will not learn.[/tweetable] I am not speaking of the second kind of person, but rather referring to those of us who yearn to better ourselves and take steps to that end. We are not folding our arms, plugging our ears, and closing our eyes. We are committed to love but not yet loving well. We are committed to kindness but not always closing the deal.

“The road to enlightenment is long and difficult,” Lamott has written. Along this road,  bandits hide in the roadside brush and unexpected potholes speckle the pavement and an infinite number of off-ramps beckon travelers away. Those who have committed to walk this street are all sojourners. Some are further ahead, yes, but we are all on our way. So let’s have patience with each other as we learn to walk and talk.

Lamott once said, “You can either practice being right or practice being kind.” Maybe she’s right, but perhaps not. When it comes to transgender issues, I have a hunch that we can practice kindness with each other even as we move toward rightness.

Put the cup down, Jesus, we’re working on it.