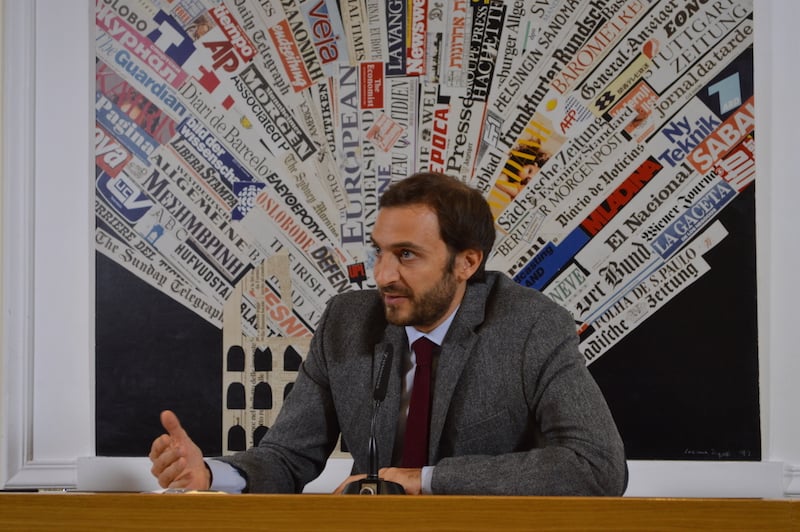 ROME (RNS) An Italian investigative journalist on Tuesday (Nov. 17) spoke out against what he called a “medieval” Vatican law that might result in a jail sentence of up to eight years for publishing confidential Holy See documents.

Emiliano Fittipaldi, whose new book “Avarice” reveals the struggle for financial reform at the Vatican, is under investigation for publishing secret documents leaked from the Holy See. A fellow Italian journalist, Gianluigi Nuzzi, is also being investigated for revelations made in his book, “Merchants in the Temple.”

While describing the investigation as “a terrible moment,” Fittipaldi remained defiant:

“From my point of view they are crazy charges, in the sense that in no democratic state, in no Western democracy, are there such restrictive laws on press freedom and expression.”

Fittipaldi said he went to meet with investigators on Monday to learn the details of the accusations against him. He and Nuzzi are accused of crimes against the Vatican City State and its security, part of a 2013 decree by Pope Francis intended to prevent documents from being leaked. It applies only within the Vatican City State and carries a jail sentence of up to eight years.

Two people who were part of a temporary commission to advise Pope Francis on reforms, Spanish priest Lucio Angel Vallejo Balda and laywoman Francesca Chaouqui, were arrested earlier this month on allegations that they leaked the documents.

Fittipaldi argued that the pontiff himself had already discussed everything Fittipaldi wrote about in the book, albeit in less detail.

“He’d already denounced the sicknesses of the Curia (or Vatican administration),” Fittipaldi said. “Obviously he didn’t go into detail because he’s not an investigative journalist.”

The publication of the two books has been dubbed “Vatileaks II,” a take on the first such scandal, in 2012, when Nuzzi published documents leaked to him by then-Pope Benedict XVI’s butler.

Fittipaldi, however, said that the two episodes are not comparable, as Nuzzi’s earlier book refers to the private affairs and correspondence of the then-pope, whereas the two new books rely on a number of sources from different Vatican bodies.

The new books “narrate the financial riches, the economic scandals within the Vatican. It’s news, I think, that is fundamental to recount. It’s important for the faithful and the nonfaithful around the world,” he said.

The investigation will be a test case for the 2013 law and is viewed by Fittipaldi as a bid to deter other such disclosures:

“They want to create an internal precedent, as a way to stop other leaks in the future. They don’t care at all about what we think of these medieval rules.”