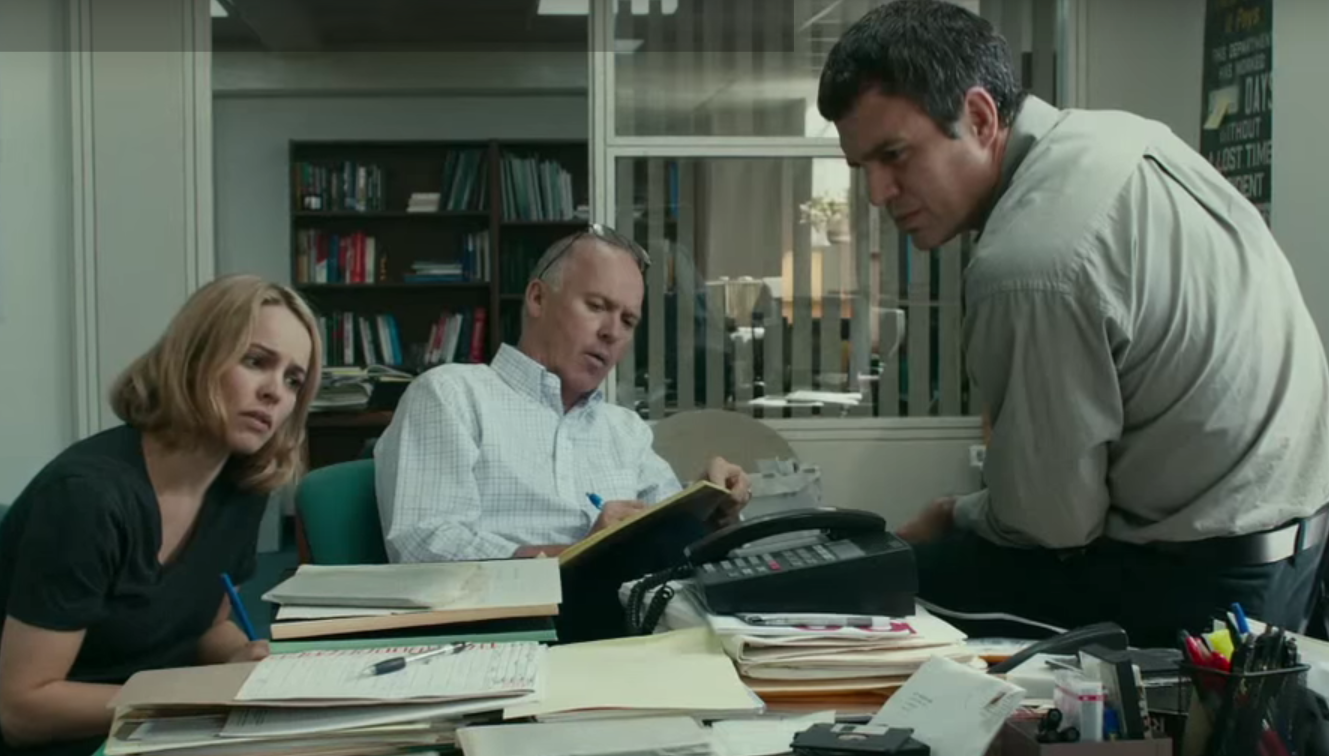 WASHINGTON (RNS) Viewers came to watch “Spotlight” for its dramatic themes: clergy sex abuse and power, God and media. Or they came for its top-flight cast and Oscar buzz.

Or they came because friends said it was a good movie. Said one millennial: “Mom said it was important.”

The retelling of The Boston Globe’s Pulitzer Prize-winning expose of the clergy abuse scandal in Boston delivered on those expectations during a workweek afternoon viewing at the downtown Cineplex.

But it seems unlikely that the film, which opened to hundreds of theaters Friday (Nov. 20), will revive the general public rage and disgust with predatory priests and the church that hid them as the Globe’s stories did in 2002. The idea that abuse could be rampant — yet buried from the bleach of public scrutiny — is not so surprising anymore, said Richard Boudreau, 67, who was once an altar boy and a graduate of a Jesuit high school.

A decade after the Globe expose when the Catholic scandal was at full boil, allegations that Penn State assistant football coach Jerry Sandusky abused children came to light. And so did allegations that university officials and others were aware of his actions but failed to protect youth in Sandusky’s nonprofit program.

“’Spotlight’ shows how people like Sandusky can hide and how people can evade taking a stand, even when they know about abuse,” said Boudreau, noting the film’s recounting of how the abuse was known throughout the Boston Catholic hierarchy and beyond.

Boudreau also recalls the early days of the scandal, when naysayers tried to blame it on homosexual priests and gay teens. “Speaking as a gay Catholic, that was painful. It takes a long time for people to realize these abuses are not about sex, they are about power.”

Abuse of power can fester in the dark because institutions are allergic to exposure, more than one moviegoer observed.

“I’m a Christian and what struck me is imperfection of institutions, run by imperfect human beings,” said Jordan Russell, 29, after the film, which also showed Globe reporters’ regretful recognition that the paper originally had overlooked the story for many years. A survivor of abuse by a priest when he was a child bows his head in pain in a scene from the “Spotlight” trailer.

Lizette Kennedy, 50, a Catholic and an attorney, echoed that view. The Catholic Church may be a religious institution but it’s “still a business” that should have known that “hiding something criminal is wrong.”

Anger over the scandal is no longer fresh for many American Catholics. In 2002, a Gallup survey found Catholics’ confidence in their church had plunged nearly to its lowest ebb, 41 percent. It has recovered somewhat but still hovers 20 percentage points or more below the level of confidence in the 1970s.  And in 2013, more than a third of Catholics (34 percent) told Pew that the abuse scandal was “the most important problem facing the Catholic Church today.”

Even so, the scandal has not prompted people to leave the faith in great numbers, according to the Pew Research Center.

In 2008, when Pew asked an open-ended question of former Catholics about the main reason they are no longer Catholic, only 2 percent to 3 percent cited the scandal as the main reason, said Greg Smith, associate director of research. The number bumped up, however, when people could list multiple reasons for leaving: More than 1 in 5 said the scandal was “an important reason.”

Still, Pope Francis has won high marks with a majority of Catholics (55 percent) who say he is doing a good or excellent job addressing the scandal. Then again, Francis wins high marks on most of the issues he faces.

“This issue is still something that makes Catholics very upset and angry,” said Mark Gray, a senior researcher at the Center for Applied Research in the Apostolate, an agency that tracks Catholic statistics. “It just isn’t the first thing on their mind when they think about the church, the way it might have been in 2002 and 2003.”

In a decade of surveying Catholics on their views on this, CARA found there was never a significant impact in Mass attendance or affiliation with the church. There was a decline in donations to bishops and diocesan financial appeals initially, but donations bounced back to pre-scandal levels by 2006, Gray said.

Gray, who also teaches American pop culture at Georgetown University, is not sure people will line up at the “Spotlight” box office. He hasn’t viewed it yet, but even with the big-name cast led by Mark Ruffalo and Michael Keaton, Gray sees it as more of an on-demand, watch-at-home kind of film about a story most people already know.

“People have not forgotten,” said Tatum-Webb, a Methodist. “You can’t help but be shocked, still,” she said, “by the scope of the scandal. All those children … ”