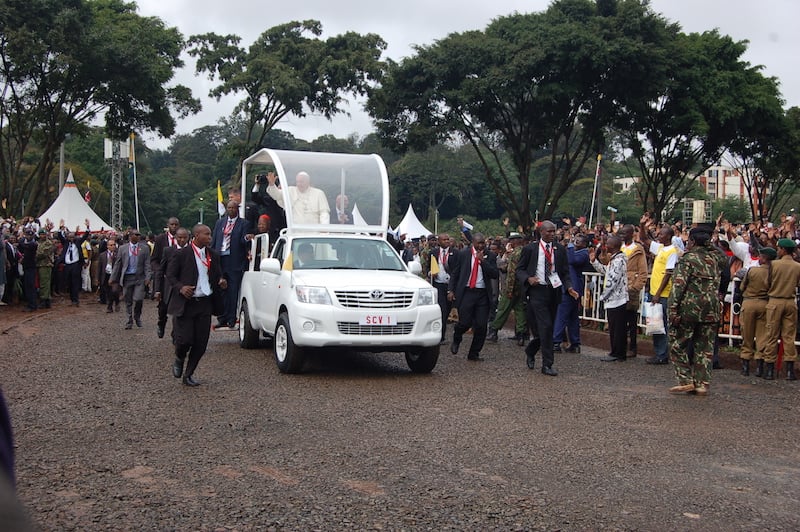 Pope Francis waves as he arrives at the University of Nairobi grounds for the Mass. RNS photo by Fredrick Nzwili

NAIROBI, Kenya (RNS) On the second day of his Africa tour, Pope Francis touched on familiar themes during an outdoor Mass the University of Nairobi: the health for families, the embrace of children, and respect between men and women.

But earlier in the day, at a meeting with other Kenya religious leaders, Francis stressed the importance of ecumenical and interfaith dialogue.

Kenya has seen repeated terrorist strikes by the militant Muslim group al-Shabab, including massacres at the Westgate shopping Mall in 2013 and at Garissa University College in April.

The pope said bridging divisions between Muslims and Christians was not a luxury.

“This relationship is challenging, it makes demands of us,” said the Pontiff. “It is not something extra or optional, but essential — something which our world, wounded by conflict and division increasingly needs.”

Kenya is mostly Christian, but Islam is the second largest faith, practiced by about 11 percent of the population.

The country’s youth have been heavily recruited by  al-Shabab militants largely because of its location. It shares a long border with Somalia. In addition, Kenya is one of the biggest contributors to African Union troops in Somalia.

READ: In Kenya, Pope Francis talks about youth, the environment and political corruption

At the public Mass, Francis focused on traditional Catholic themes, saying Christian families have a mission to radiate love and spread aspects that promote life.

“This is important today, when we are seeing the growth of the culture of materialism and indifference,” Francis told the jubilant crowds.

The pontiff called for the rejection practices that threaten life of the unborn, foster arrogance in men and hurt or demean women.

“Kenyan society has long been blessed with strong family life, a deep respect for wisdom of the elderly and a love of children. The health of any society depends on the health of its families,” the pope said.

Kenya declared Thursday (Nov. 26) a public holiday to allow Catholics who make up a third of its population to attend Mass. Some Catholics begun streaming into graduation square, the venue for the Mass, as early as 1 a.m.

By daybreak, thousands of others braved the cold morning rain to get a glimpse of the pontiff. When he arrived, Francis received a huge applause from the crowd many of them dancing to keep warm. 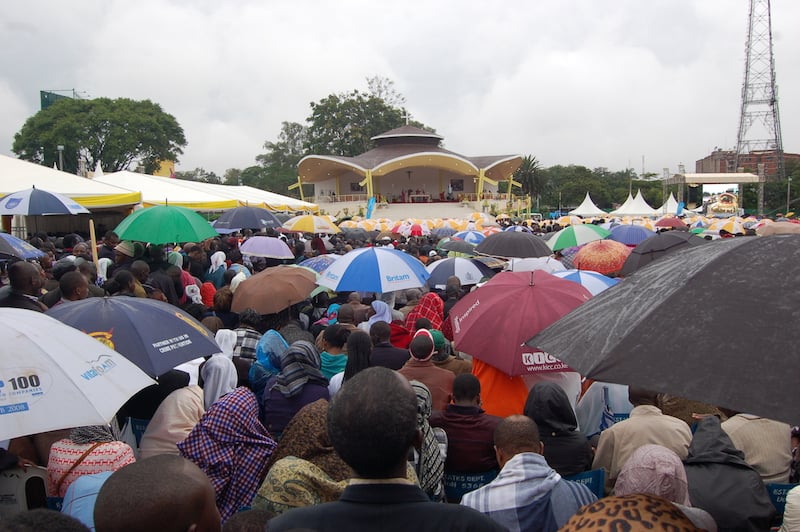 Thousands attended the Mass on the campus of the University of Nairobi under rainy skiess. RNS photo by Fredrick Nzwili

At the university, which he described as the place where the minds and hearts of new generations are being made, Francis said he was making a special appeal to young Kenyans.

“Let the great value of Africa’s traditions, wisdom and truth of God’s words, and the generous idealism of your youth guide (you) in your work to shape a society which is more just, inclusive and respectful of human dignity,” he said.

“We are very grateful. Your presence has been a source of strength and spiritual nourishment,” Njue said.

But his words about interfaith dialogue that may have provided the ballast for the day.

God’s name, he said, “must never be used to justify hatred and violence.”

“All too often, young people are being radicalized in the name of religion to sow discord and fear, and to tear at the very fabric of our societies,” the pope said. “How important it is that we are seen as prophets of peace, peacemakers who invite others to live in peace, harmony and mutual respect.”