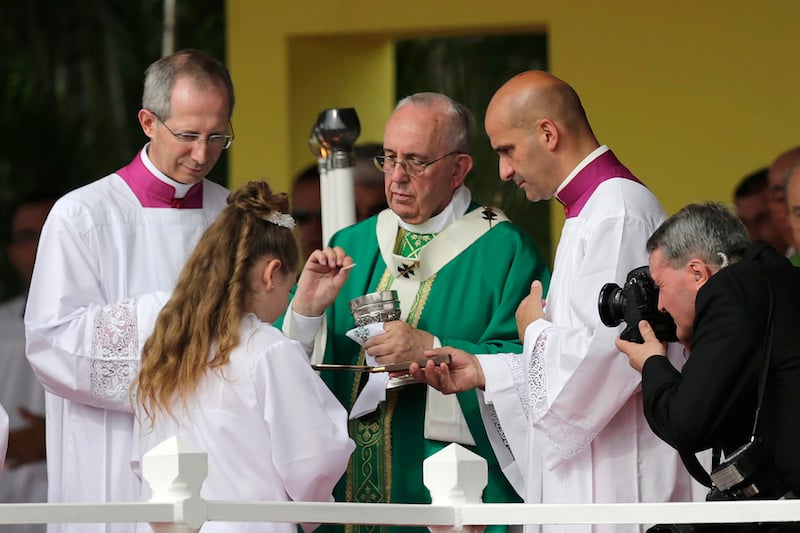 Pope Francis gives Communion at the end of the first mass of his visit to Cuba in Havana’s Revolution Square, September 20, 2015. REUTERS/Claudia Daut – RTS2028

(RNS) Pope Francis has a knack for setting traditionalist teeth on edge with unscripted musings on sacred topics. He recently did it again when he seemed to suggest that a Lutheran could receive Communion in the Catholic Church after consulting her conscience.

The exchange came up during a prayer service last Sunday evening (Nov. 15) at a Lutheran church in Rome that had invited the pontiff. And he used the occasion to engage in a question-and-answer session with some of the congregants.

One woman, Anke de Bernardinis, told Francis that she was married to a Catholic and that she and her husband share many “joys and sorrows” in life, but not Communion at church. “What can we do on this point to finally attain Communion?” she asked.

The question is fraught because the Eucharist is so central to sacramental Christianity, and because of the Catholic belief that Jesus’ body and blood are truly present in a special way in the bread and wine consecrated by a priest -– an understanding that was rejected by most Protestants after the Reformation, and which has been a source of division ever since.

Francis recognized the weight of the moment, and joked that he was “afraid” to respond in detail on such a topic in front of his friend Cardinal Walter Kasper, a renowned German theologian who was also present.

The pope went on at some length to wonder whether the Eucharist should be thought of as an end point of ecumenism, or as an aid on the journey together toward full denominational communion. Francis stressed that it was not his place to give permission for Protestants to receive Catholic Communion, and that differences on doctrine remain.

But he noted that “life is greater than explanations and interpretations,” and he cited his own experiences in which Protestant friends said they also believe in the “real presence” of Jesus in the Eucharist.

The common baptism of believers was the key starting point, Francis said. “One Baptism, one Lord, one faith,” he repeated, concluding with this counsel to de Bernardinis: “Speak with the Lord and go ahead,” indicating that it was as much a personal as an institutional question. “I don’t dare say more.”

Of course others were quick to fill in that silence, mainly with criticisms.

“Once again Pope Francis, in being pastoral and kind, has muddled things up and confused the faithful,” wrote the Rev. Dwight Longenecker, a blogging priest who was raised Protestant and converted to Catholicism. It was an “unsatisfactory waffle from a successor of Peter,” Longenecker said, adding that Francis should have told the woman to become Catholic.

“Hard to avoid the conclusion that Pope Francis just effectively rewrote the Catechism, and destroyed a Eucharistic discipline that has existed since the Reformation,” wrote the American Conservative’s Rod Dreher, another convert to Catholicism who later left for the Orthodox Church. “The Pope is refuting the magisterial teaching of his own Church, and not on a small matter either.”

Yet the assumption about the sharp dividing line on Communion isn’t quite right.

Bishop Denis J. Madden, an auxiliary bishop of the Baltimore archdiocese, noted in an interview that both Catholic canon law and the 1993 Ecumenical Directory provide for certain cases in which “intercommunion” is possible. Those circumstances are usually in cases of emergency or “grave necessity,” or with the permission of the local bishop or national hierarchy.

One crucial condition for a Protestant to receive Communion is that they genuinely believe in the “real presence” of Christ in the Eucharist.

That, in fact, is something that Lutheran and Catholic leaders agree on, said Madden, who last month issued, with his counterpart from the Evangelical Lutheran Church in America, a major document summarizing 32 points of agreement between the two churches as they head toward the symbolic 500th anniversary of the Reformation, on Oct. 31, 2017.

“I don’t think we should jump to the point and say, ‘Oh come on, we’ll all just put our hands on each other’s shoulders and go to Communion together.’ No, there are still things we differ on,” said Madden, who noted there are other disagreements about ordination and the like.

“But what we try to say in this document is that while there are a number of things we differ on, they are not enough to keep us separated.”

As far as Francis’ implication that a Protestant believer could consult his or her conscience and decide to approach for Communion, Madden said that’s not completely out of bounds.

He recalled the episode at the 2005 funeral of Saint John Paul II, when Cardinal Joseph Ratzinger — a theological straight shooter who would be elected Pope Benedict XVI a short time later — gave Communion to Brother Roger, a Swiss Protestant and founder of the Taize ecumenical monastic community in southeast France.

“Ratzinger was criticized for that, but he felt that Brother Roger believed in the real presence, that he was prayerful, that it was an appropriate setting for that particular time,” Madden said. “And he did not feel it was inappropriate.”

(It later came out that John Paul himself had repeatedly given Brother Roger Communion at Mass, though the monastic never converted.)

“If you have those times when there is shared communion that does not mean that everything is agreed upon,” Madden said. “There will always be time for debate and for parsing and so on. But then there comes a time when you have to look at what is the greater good.”

Edward Condon, a canon lawyer who writes for the Catholic Herald of Britain, made a similar point.

“While some have gone bonkers at the suggestion that the pope wants to give Communion to Protestants, the church already holds that this is not a simple question of can they or can’t they, but one of time, place, disposition, and belief,” Condon wrote in a column.

“These are not procedural hoops to jump through but necessary expressions of the seriousness of the Eucharist.”