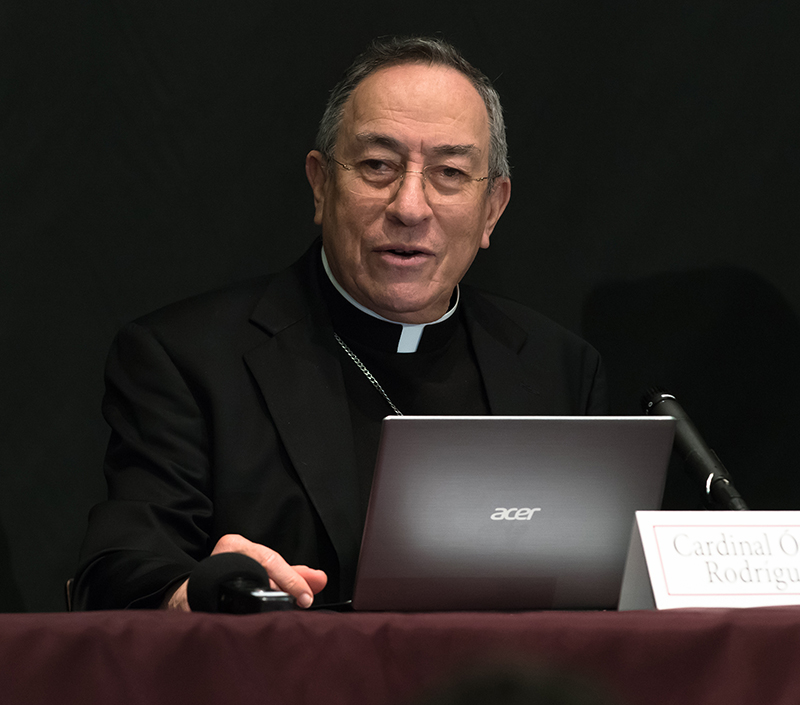 NEW YORK (RNS) Despite intense opposition from some conservatives and new revelations of financial scandals in the Vatican, Pope Francis is at peace with the reformist course he has set for the Catholic Church, according to a cardinal who is a leading adviser to the pontiff.

Honduran Cardinal Oscar Rodriguez Maradiaga also said that the latest reports of excessive spending and political maneuvering by officials of the Roman Curia only confirm the need to press ahead with an overhaul of the papal bureaucracy.

“You know, everybody that is trying to make good will have opposition,” Rodriguez said Tuesday evening (Nov. 3) after a conference at Fordham University on Francis’ environmental agenda. “The books of the Bible said, especially the Book of Wisdom, ‘If you want to follow the Lord, prepare to the battle.’ And the pope is prepared.”

“It’s a revolution going on (in the Vatican). But a revolution of love, and hope,” said Rodriguez, who heads the council of nine cardinals that Francis set up after his 2013 election to advise him. “And that’s the way it is going.” 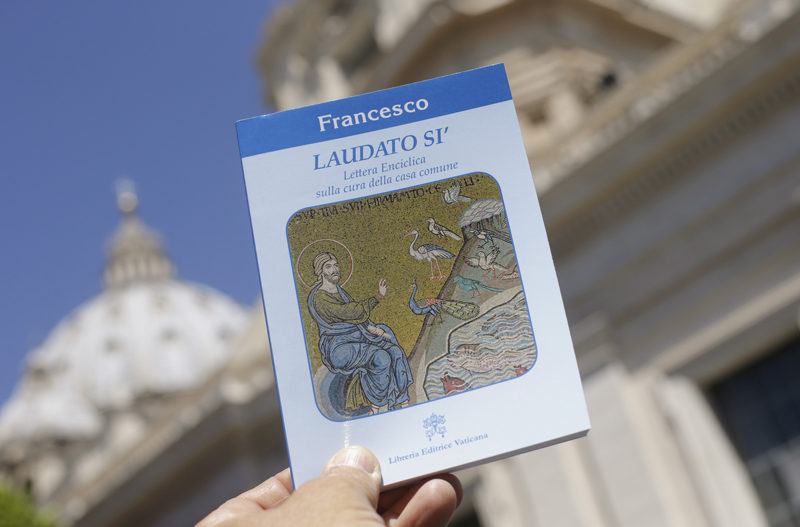 As Francis’ point man on overhauling the papal bureaucracy, Rodriguez has a major role in ensuring that the pontiff’s larger reform projects succeed, and he and the rest of the Council of Cardinals are set to meet with Francis on curial reform early next month.

They’ll have a lot to talk about.

The Vatican was rocked this week by news that Vatican authorities had arrested two people — a Spanish monsignor who works in the Curia and an Italian lay woman who used to advise the pope on financial reform — and charged them with leaking confidential documents to journalists about financial misdeeds at the Holy See.

Two books based on those leaks and other reporting are coming out this month and have created a media sensation — and evoked the sense of crisis that was characteristic of the final stretch of the papacy of Pope Emeritus Benedict XVI, whose retirement paved the way for the election of Francis.

On Wednesday, a Vatican spokesman said that the revelations in the books are in fact based on information that Francis himself requested in the early months of his pontificate as he sought to tackle corruption.

The Rev. Federico Lombardi rejected the notion of “a permanent reign of confusion” in the Vatican and said that under Francis the reforms are ongoing. Francis “knows the situation, he knows what needs to be done, and how to proceed,” Lombardi said.

“That bad news might not be a source of joy is so obvious that it doesn’t deserve an official statement,” he added. “But that does not mean the pope is discouraged; he moves ahead serenely.”

Rodriguez — who said he had not yet read the two books — also said in an interview in New York that Francis will not be swayed or discouraged and will continue to clean house in Rome.

“Oh yes. Because he is a man of prayer, he is a man of God. So he is never disappointed by these things,” the cardinal said. “He’s not even afraid. He knows what he is doing. He’s not just acting without reflection, without praying over steps he is taking.” 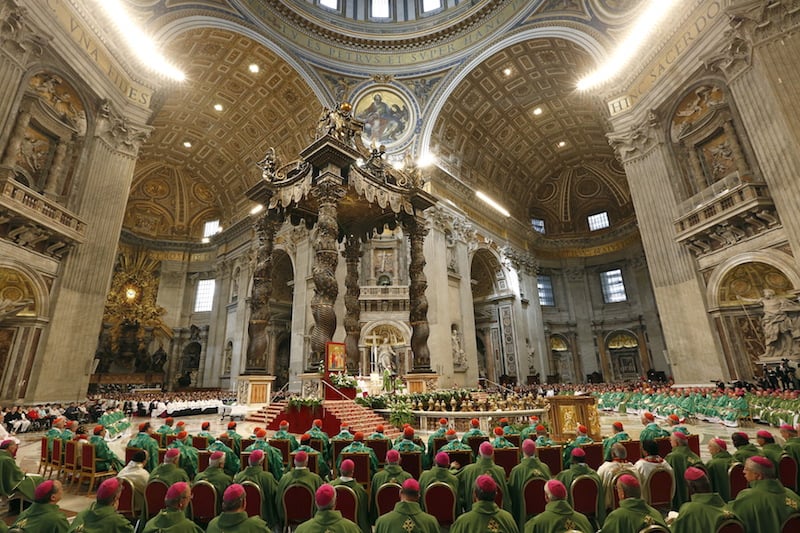 Pope Francis leads a Mass to mark the closure of the synod on the family in St. Peter’s Basilica at the Vatican on Oct. 25, 2015. Photo courtesy of REUTERS/Alessandro Bianchi *Editors: This photo may only be republished with RNS-VATICAN-SCANDALS, originally transmitted on Nov. 4, 2015.

Rodriguez pointed as well to the opposition and maneuverings that went on during the three-week summit, or synod, of international bishops at the Vatican last month. Conservatives sought to thwart discussions of new approaches to modern families, including gays and divorced and remarried Catholics.

At one point, Rodriguez recalled, he thought the pope “was going to be very sad” when it was revealed that 13 conservative cardinals at the synod had secretly sent him a letter — which Rodriguez said they had apparently been working on among themselves since August — complaining about the synod process and warning Francis against making changes in church policies.

But Rodriguez said that Francis instead answered the cardinals openly, telling them not to indulge in “conspiracy theories” and assuring them that all would be open and honest. After intense debates, Rodriguez said, the synod ended well and the letter-writers, he said, “felt embarrassed for what they did because it was useless, not necessary.”

“The church cannot go backwards because the Holy Spirit does not have a reverse, like cars,” the cardinal said. “He leads us always ahead. After this, many things have to change in the mentality and in the practice of pastors” when it comes to the divorced and remarried, for example, and others who feel outside the church’s embrace.

Rodriguez said that one speech by Francis to the 270 churchmen at the synod was key, a talk in which the pope made it clear that the hierarchy needs to be more open to debate and collegial in governing:

“It means, ‘Well, fellows, this is the way the church has to go, and let’s go.’ And it was very well-received, that speech. And it was necessary,” Rodriguez said.

As for growing calls by some Catholic conservatives, especially in the U.S., for a “battle” or a “civil war” to halt any reforms to Catholic practices and approaches on sex and marriage, Rodriguez said they had no reason to be concerned. The synod was focused on pastoral policies, not doctrinal changes, he said. And the critics should have faith:

“I say it’s necessary to be open to the Holy Spirit because the church is guided by the Holy Spirit, not by the attitudes of men, or women, or pastors of the church,” he said. “If they” — the pope’s critics — “feel that they are the defenders, remember that the pope was elected by the majority (of cardinals in the 2013 conclave) and if we believe, the Holy Spirit is guiding him.

“And so, it’s a matter of faith,” he added. “It means maybe you are fighting against the Spirit.”

Rodriguez was in New York as part of a U.S. tour on the pope’s recent encyclical, “Laudato Si’.” The tour began Monday at Georgetown University in Washington, D.C., and continued with an appearance at Notre Dame University in Indiana.

Another senior Vatican official the pope relies on to promote his environmental message, Cardinal Peter Turkson, was also in the U.S. this week making several appearances to rally support for battling global warming, ahead of the upcoming international climate change conference in Paris that Francis believes is crucial to beginning to change the dynamic on environmental stewardship.

Some of the most intense resistance to the pope’s encyclical has come from the U.S., and from Catholic conservatives here.

Religion Hub
Pope hopes charity match deals a “kick” to exclusion
Follow us on Facebook!
Submit your photos to RNS