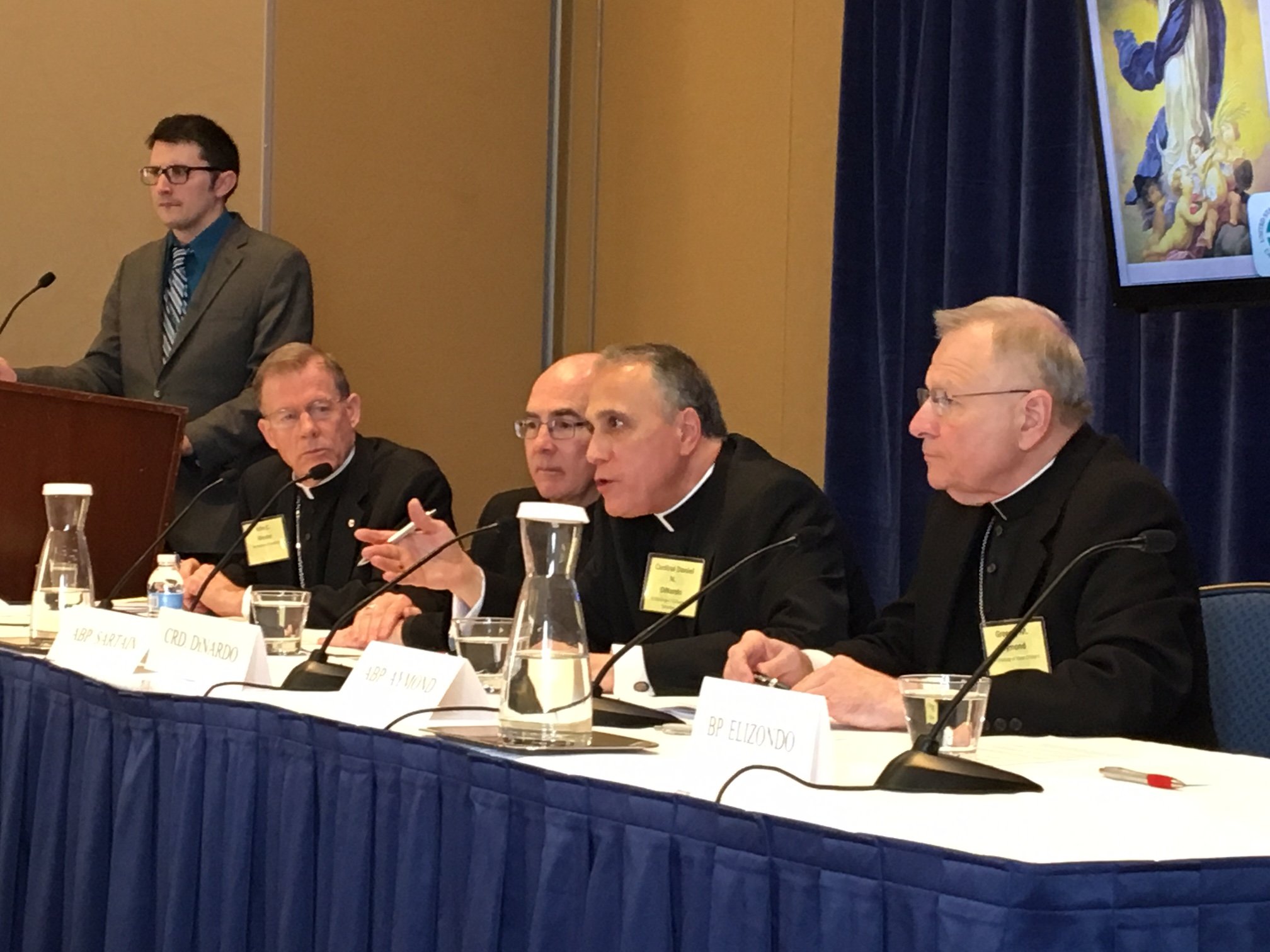 BALTIMORE (RNS) The nation’s Catholic bishops on Tuesday (Nov. 17) passed an updated guide for Catholic voters ahead of next year’s elections, but only after airing unusually sharp disagreements on how much they can, and should, adjust their priorities to match those of Pope Francis.

More than any other item on the agenda of the bishops’ annual meeting here, the debate over the lengthy voter guide, called “Faithful Citizenship,” revealed deep divides among the bishops and provided a snapshot of the extent of the “Francis effect” on the U.S. hierarchy.

In the most impassioned objection to the voter guide, San Diego Bishop Robert McElroy took the floor to argue that the document — which was a reworking of an 84-page treatise first written in 2007 — should be scrapped because it did not reflect the way that Francis has elevated the battle against poverty and for the environment as central concerns for the Catholic Church since his election in 2013.

“I believe that this document is gravely hobbled,” said McElroy, who was an outspoken advocate for the church’s social justice teachings even before Francis named him to the large and growing Southern California diocese earlier this year.

“Specifically, I think the pope is telling us that alongside the issues of abortion and euthanasia — which are central aspects of our commitment to transform this world — poverty and the degradation of the Earth are also central,” McElroy said. “But this document keeps to the structure of the worldview of 2007. It does not put those there.”

Instead, he said, the voter guide “tilts in favor of abortion and euthanasia and excludes poverty and the environment.”

Apparently referring to political conservatives who argue that Catholics cannot vote for candidates who support abortion rights or gay marriage, McElroy said the new draft still “provides a warrant for those who will misuse this document outside this room to exclude poverty and exclude the environment as key issues and say they are secondary, and cite this document as they have done for the last two election cycles.”

McElroy’s position was supported by a number of other bishops, some of whom were also dismayed by the number of times the draft mentioned same-sex marriage, even though the U.S. Supreme Court effectively settled the issue by legalizing gay marriage last June.

“I think we need a new document,” said Tuscon Bishop Gerald Kicanas. “I think it was a mistake to try to revise a document from 2007 when so much has happened since then.” He called Faithful Citizenship “very complex and not helpful.”

Bishop Stephen Blaire of Stockon, Calif., agreed that “the times have dramatically changed” and said the “cumbersome” new draft needed to be scrapped.

But members of the committee that spent nearly a year-and-a-half reworking the voter guide rejected the pushback.

“We still think it’s effective,” a clearly irritated Houston Cardinal Daniel DiNardo — chairman of the drafting committee and vice president of the U.S. Conference of Catholic Bishops — told Blaire and the other critics.

DiNardo also told the 240 bishops that the committee was only fulfilling the mandate it was given by the USCCB and said the panel had done its best to update the guide with references from Francis — although, he added in a spiky rejoinder to McElroy, “perhaps not to your satisfaction, and to the rhetorical flourishes which you bring.”

Another member of the drafting committee, Hartford Archbishop Leonard Blair, also rejected the critiques, and he echoed comments by other conservatives who were disturbed by the idea that Francis has ushered in a “revolution” in Catholicism that their documents needed to reflect.

“There is kind of a rhetoric of regime change that is going on in the church” in the wake of the election of Francis in 2013, said Blair. “I think we have to be very, very wary of that.”

Brooklyn Bishop Nicholas DiMarzio, who was one of the original drafters of the 2007 document, agreed that the voter guide needed to be overhauled but said that would be impossible to do with less than a year to go before the election.

Instead, he said, the hierarchy should invite the presumptive nominees of each party to address the bishops when they meet again in June. That way the bishops can question the candidates directly and “keep their feet to the fire” on Catholic issues — an encounter he said that would likely provide a better guide for Catholic voters than any document.

In the end, while many bishops acknowledged that the new document was flawed, they were stuck with it.

“I would not want the perfect to become the enemy of the good,” Washington Cardinal Donald Wuerl told the bishops, in an effort to cool tempers and provide a rationale for moving ahead with what they had.

“We have a good working document. It’s not perfect.” But Wuerl said that by supporting it “we will have something done this year and not run the risk of trying to do something in the midst of an election campaign.”

In the end, the revised voter guide was adopted by a 210-21 vote, with 5 abstentions.

The disagreements over the election statement, while unusually public and often pointed, were emblematic of the tensions that Francis’ new approach — which he personally delivered in several speeches during his U.S. visit in September — has raised among bishops. That’s especially true in the U.S., where bishops have been used to promoting an agenda that focuses on a few hot-button culture war issues.

The debates at this year’s fall meeting of the USCCB indicated that while the number of bishops in tune with the pope’s more pastoral, open approach and focus on social justice has grown, those bishops still do not have a critical mass within the American hierarchy to set a new agenda.

That dynamic was also underscored by the mixed results of votes on Tuesday for the heads of various conference committees; several of the votes featured contests between bishops seen as representatives of the “old guard” and four bishops appointed to dioceses by Francis.

On Wednesday, the final day of their meeting, the bishops were to go into a closed-door session, where some more of their differences might be hashed out — perhaps in even more frank terms.