Conservative State Senator Patrick Colbeck of the 7th District thanks members of the Satanic Temple of Detroit for attending the rally for religious liberty at the State Capitol on December 2, 2015. Photo courtesy of USA Today

LANSING, Mich. — To counter a live Nativity scene planned next weekend on the Michigan state Capitol lawn, a Satanic group plans to resurrect its own “snaketivity” display begun last year.

A Nativity scene that Sen. Ted Cruz’s presidential campaign is planning will happen the evenings of Dec. 12 and 13.

The Satanic Temple of Detroit is awaiting approval from the Michigan State Capitol Commission to perform its own live display Dec. 19, Jex Blackmore, the temple’s director, said at a religious liberty rally Wednesday. State Sen. Rick Jones, a Republican from Grand Ledge, Mich., plans to sponsor another Nativity display the same day.

“The overriding message in our holiday display, and many of the Satanic Temple’s public activities, is one of plurality and religious liberty,” Blackmore said in a written statement. “We have no interest in proselytizing Satanism to the public. However, we refuse to allow one religious perspective (to) dominate the discourse.” 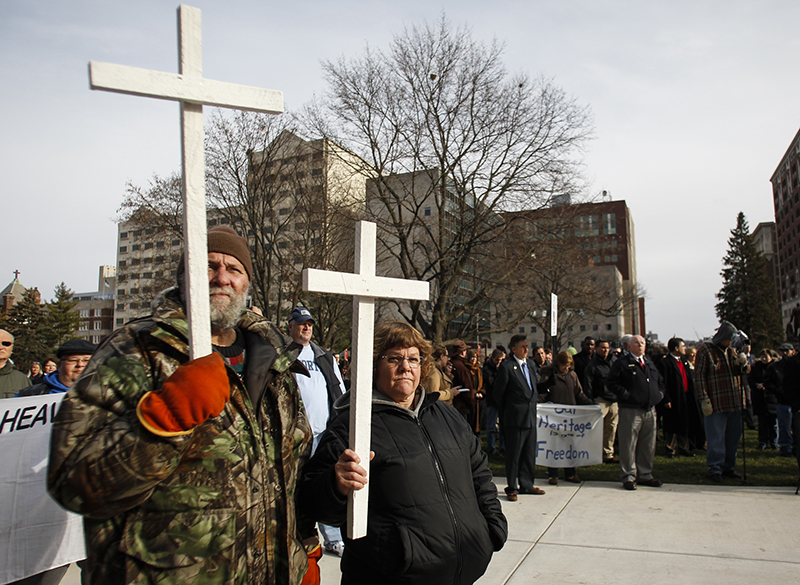 Steven Freund and wife Lori of God’s House Mission in Gladwin wield crosses on December 2, 2015, at the State Capitol during a rally to protect religious liberty. Photo courtesy of USA Today

“Freedom of speech may be inconvenient, messy and at times offensive, but that is the cost of living in a free country,” Wendy Day, Michigan state director for the Cruz campaign, said in an emailed statement. “America was founded on the principles of free speech and freedom of religion. … We don’t have to agree on religious principles to stand together for the right of free speech.”

At Wednesday’s Rally for Religious Liberty, sponsored by the Christian group Salt & Light Global, Blackmore and a handful of her fellow Satanists stood quietly at the back of the crowd on the east lawn with a large banner reading, “The Satanic Temple supports religious liberty,” in white letters on a black background. While the event’s speakers railed against what they deemed governmental intrusion into religious life — many speakers specifically criticized the U.S. Supreme Court’s ruling earlier this year that states must allow gay men and women to marry — the Satanists received numerous raised eyebrows.

But, overall, they received a warm welcome.

After speaking from the Capitol steps, state GOP Sen. Patrick Colbeck of Canton, Mich., walked to the Satanists, shook their hands and thanked them for coming.

“Beautiful sign,” he told them. “I would’ve probably chosen a different color.”

Sean Bertolino, the capital area chairman for the Cruz campaign, also spoke with the group, giving them a Cruz campaign Christmas card that said, “One unplanned pregnancy changed the world.” After the chat, Bertolino said he was pleased to find a common interest in religious liberty.

“It’s a common issue, which is kind of cool,” he said.

William Wagner, president and chairman of Salt & Light, said he couldn’t comment specifically on the Satanic Temple’s attendance because he wasn’t aware of the group or its positions, but the rally was about protecting various religious expressions.

“It’s about the First Amendment,” he said, “That limitation on the exercise of government power protects the press and protects expressions of religious conscience of all kind.”

The event was decidedly Christian, with signs such as “Vote Biblically” spread throughout the crowd.

“We have radical Islam; we need radical Christianity,” the Rev. Ellis Smith of Detroit’s Jubilee City Church said from the Capitol steps.

During the speeches, Amy Piatt of Muskegon, Mich., stood by Blackmore’s group, her eyes closed and palms heavenward, praying for the Satanists. Asked why, she said, “because the Lord told me to do it.”

The Satanic Temple first brought its snaketivity display — which depicts a snake wrapped around the Satanic cross, presenting a book as a holiday gift — to the Capitol in December 2014 in response to a planned Nativity scene later called off. But the Satanists’ announcement spurred a response from Lansing-area churches and from Jones, who helped pull together a Nativity scene to counter the snaketivity last year.

John Truscott, vice chairman of the Capitol Commission that regulates the statehouse facility and grounds, said Wednesday morning that the Satanic Temple hadn’t submitted an official request for its display but had sent emails checking dates around Dec. 18 or 19. Truscott said the commission could sign off on a request within a week of its submission, so any request still could receive approval.

The commission would be obligated to approve the snaketivity display as long as it meets commission’s guidelines, which limit the size of the display and prohibit permanent displays, meaning the Snaketivity would have to be placed and removed daily. The Satanic Temple met those criteria last year.