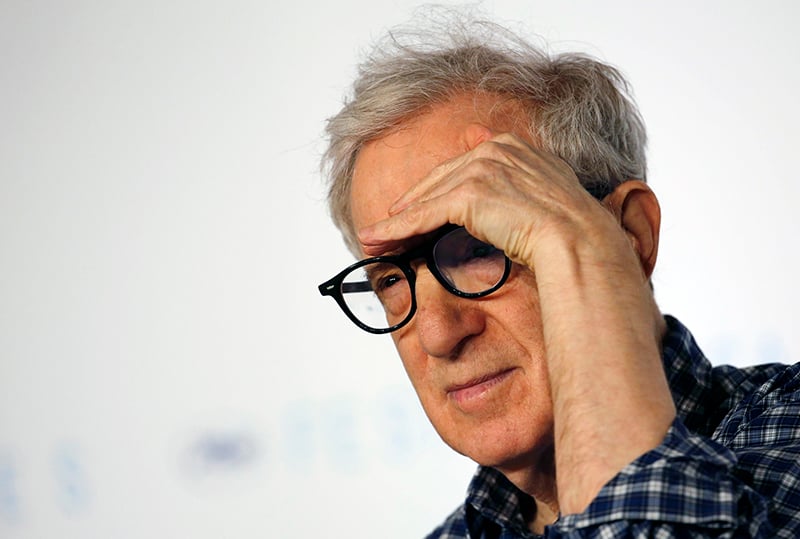 Director Woody Allen gestures as he attends a news conference for the film “Irrational Man” out of competition at the 68th Cannes Film Festival in Cannes, southern France, on May 15, 2015. Photo courtesy of REUTERS/Regis Duvignau

I have been a fan of Woody Allen’s work for more than half of my life (though not of his personal choices).

Question: has Woody Allen’s career been “good for the Jews?”

Yes, Woody Allen is Jewish — or, as he would put it, “Jewish — with an explanation.” Like many Jewish entertainers, he is utterly removed from the Jewish community and Judaism.

Consider the most notable Jewish moments in Woody Allen’s filmography.

In his collection Without Feathers, there is “Hassidic [sic] Tales, with a Guide to Their Interpretation by the Noted Scholar.” It is a satire on Hasidic stories, but it is an affectionate satire. It is clear that Woody has actually read those tales, perhaps in the version made famous by Martin Buber.

Or, “The Scrolls.” These are parodies on biblical tales, but again — loving parodies. Woody’s re-telling of the akedah (the binding of Isaac) has God castigating Abraham: “Some men will follow any order no matter how asinine as long as it comes from a resonant, well-modulated voice.” It is a great midrash.

Woody Allen’s nightclub routines are deeply Jewish. A Jewish couple, the Berkowitzes, dress up as a moose, and wind up, shot and mounted, on the wall of the restricted New York Athletic Club. A Jew successfully sells Israel Bonds to members of the KKK. A rabbi appears in a vodka ad.

Woody Allen is estranged from “official” Jewish life. But, here is the paradox: Allen fled from everything Jewish in his personal life, and yet keeps returning to Judaism as a topic for his humor.

On the one hand, there is the rejection of  Judaism as religion. But there is the re-invention of Jewish identity as attitude — mostly of irony and iconoclasm.

The question is: how much longer will we have a Judaism of attitude — at the expense of a Judaism as religion? Will our children and grandchildren care enough to create even that?

Not if the next generation of Jews are Allenists — those for whom Judaism is a “nonfactor.”

Idea: a Woody Allen movie about the Pew report on Jewish identity?

Probably not going to happen.

Still I hope that Woody wouldn’t mind if I wish him — may you live to be 120.

Opinion
Against the darkness: Remembering Pittsburgh’s Tree of Life shooting
Opinion
The most Jewish thing that Ruth Bader Ginsburg ever did
News
Ruth Bader Ginsburg, who died Friday, was shaped by her minority faith
Martini Judaism
COVID has led us all into sin
Opinion
Building interfaith community at work
© Copyright 2020, Religion News Service. All rights reserved. Use of and/or registration on any portion of this site constitutes acceptance of our User Agreement and Privacy Policy, Privacy Statement and Cookie Notice. The material on this site may not be reproduced, distributed, transmitted, cached or otherwise used, except with the prior written permission of Religion News Service.