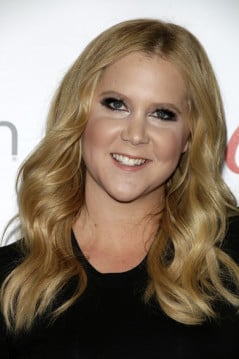 That would be me.

From 1988 to 1995, I was Amy Schumer’s rabbi, at Central Synagogue of Nassau County in Rockville Centre, New York.

I remember the Schumer family very well, and with great fondness. They were a wonderful family. Her mother was on the temple board, and chaired the education committee. I liked her father, Gordon. I officiated at the bar mitzvah ceremony of her older brother, Jason Stein. I was fond of her younger sister, Kim (now, Kim Caramele, a comedy writer who produced Amy’s new movie, Trainwreck).  I remember Amy as a sweet, funny kid, who often asked probing and humorous questions in religious school.

Amy Schumer has catapulted to the very top of American popular consciousness. It is rather remarkable. She has done so through her natural, quirky, blisteringly honest way of simply being herself. I enjoyed Trainwreck. It tells the story of a woman who avoids true intimacy. And yet, the most powerful relationship in the film is Amy’s relationship with her father. It depicts how she cares for him during his infirmity, which has its parallels in Amy’s real life.

Central Synagogue of Nassau County is a great synagogue. But it is no funnier than any other American synagogue.

And yet, for some reason, it has produced five comedians. There are Amy and Kim. And then, there is Dave Attell, an outrageous standup comedian. He appears in Trainwreck. Is it merely a coincidence that his late father was the synagogue president at the same time that Amy’s mother was on the board?

There is also Rory Albanese, a comedian, producer and television writer (most notably, former writer for The Daily Show).

And there is also Jon David Hotchkiss, who was a writer for The Larry David Show, Penn and Teller, Late Night with Craig Kilborne, and The Bill Maher Show.

Maybe there’s no accident here. Stand up comedy has a long and venerable history in Jewish life.

It stars with the badkhan – the jester, who had an honored role in traditional Jewish society. His job was to make fun of couples at their weddings — even telling the bride that she was ugly, or disparaging the couple’s wedding gifts.

In 1648, the Cossacks went on a killing spree in Ukraine, devastating Jewish communities. The rabbis surmised: it must have been our fault. Things were getting too loose. Too much levity; too little Leviticus. That almost put the badkhan out of business.

Not so fast, said some rabbis. Maybe the badkhanim are actually not funny. Perhaps they are really social commentators. They could stay around.

That is how the Jewish comedic tradition — social criticism, iconoclasm, anti-authoritarianism — was born.

The true alte zeyde (“old grandfather”) of the sardonic Jewish comic tradition was, of course, the late Lenny Bruce. His social commentary was trenchant and often obscene, though nowadays we would consider it quite tame. From Lenny Bruce, there is a straight line to David Steinberg, Jackie Mason, Jerry Seinfeld, Larry David, Joan Rivers, Sarah Silverman, etc., etc. etc.

The Jewish comedic tradition is contagious. There is a relatively new genre of religious Christian comedians, as well.

Jewish comedians have all had a range of relationships with the Jewish community (what else is new?) Some have been connected; others, not so much.

But, the rabbi connection is particularly strong. Consider: David Steinberg is the son of a rabbi, and he once studied theology in Israel. Jackie Mason is an ordained rabbi. Sarah Silverman’s sister is a rabbi. My friend and colleague Bob Alper is a comedian. Rabbi Moshe Waldoks has done stand up comedy for years, and co-authored (with Bill Novak, father of actor B.J. Novak) The Big Book of Jewish Humor.

And Amy Schumer was a religious school cutup. In this, she follows in a noble tradition. According to ancient legend, Abraham was a rebellious kid who asked impertinent questions. We can certainly imagine Baruch Spinoza, the heretic of Amsterdam, sitting in the back of his religious school classroom, cracking jokes.

So, yes — being Jewish can be funny, and being funny can be Jewish. In particular, stand up comedy. It’s about being out there alone on the stage. This is very Jewish. Throughout history, Jews have gone out onto the stage of history, often facing hostile crowds, and we have been able to laugh at ourselves and others. Purim, the essential Jewish comedy festival, reminds us: laughter has been our most potent weapon against our enemies.

So, Amy, this one’s for you. It’s from the Talmud, which can often be hysterically funny, whether or not the ancient sages intended it that way.

Two rabbis were taking a stroll in the marketplace, and they ran into Elijah, the prophet (who, according to lore, never really died, and apparently kept on coming back to earth in various disguises). They asked the prophet: “Who in this marketplace is most deserving of reward in the World to Come?”

The prophet pointed to two men. The rabbis asked the two men about their professions. They replied: “We are jesters. When people are sad, we make them happy.”

That’s why we like people who are funny. They make us happy.

And they remind us of something else. There is a connection between “humor” and “human.”