A clip of Donald Trump calling for a ban on Muslims entering the U.S., has been included in a purported recruitment video for the Islamic State. REUTERS/Brian Snyder
December 7, 2015
Reuters 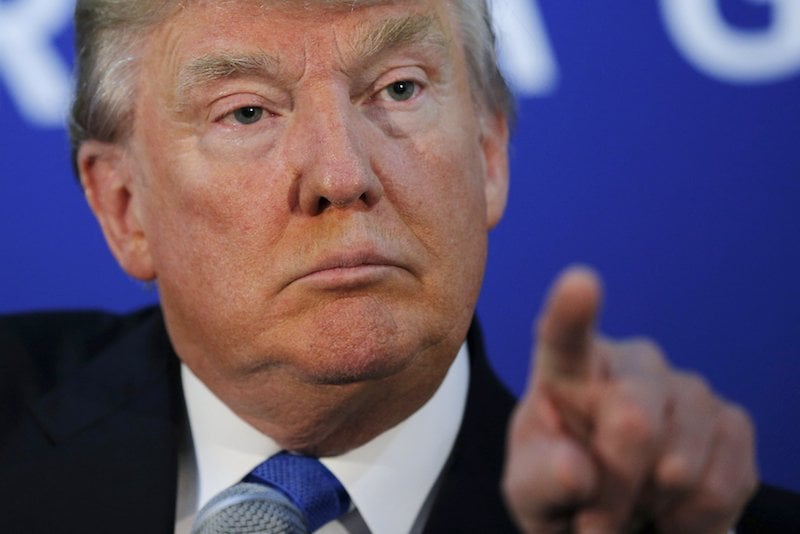 Donald Trump is falling in the GOP candidate polls as he is dogged by his controversial remarks about Muslims and rebuffed by black clergy. REUTERS/Brian Snyder TPX IMAGES OF THE DAY

WASHINGTON (Reuters) -- Republican presidential front-runner Donald Trump called for a ban on Muslims entering the United States on Monday (Dec. 7) in the most dramatic response by a candidate yet to a shooting spree last week by two Muslims who the FBI says were radicalized.

Trump's position, issued in a statement from his campaign, drew fierce criticism and accusations that he was playing to Americans' fears a day after President Barack Obama called for religious tolerance.

The billionaire developer and former reality TV star called for a complete shutdown of Muslims entering the country "until our country's representatives can figure out what is going on."

"Until we are able to determine and understand this problem and the dangerous threat it poses, our country cannot be the victims of horrendous attacks by people that believe only in Jihad, and have no sense of reason or respect for human life," Trump said.

Trump campaign manager Corey Lewandowski, asked in an email if the shutdown would apply specifically to immigration or more broadly to student visas, tourists, and other travelers to the United States, replied "everyone."

Trump went farther than other Republican candidates, who have variously called for a suspension of a plan by Obama to bring into the United States as many as 10,000 Syrian refugees fleeing their country's civil war and displacement by Islamic State militants.

Ibraham Hooper, director of the Council on American-Islamic Relations, had a blistering response to Trump's demand.

The White House deputy national security adviser, Ben Rhodes, told CNN that Trump's move is "contrary to American values." Obama on Sunday night in an Oval Office address had called for Americans to be tolerant of fellow citizens regardless of their religion.

Republican candidate Lindsey Graham, a U.S. senator from South Carolina, tweeted that Trump "has gone from making absurd comments to being downright dangerous with his bombastic rhetoric."

"This is just more of the outrageous divisiveness that characterizes his every breath and another reason why he is entirely unsuited to lead the United States," said another Republican candidate, Ohio Governor John Kasich.

A spokesman for Republican presidential candidate Ben Carson, Doug Watts, said Carson did not believe that religion should be a litmus test for entry to the country but said everyone visiting the country should be monitored during their stay, saying that is the case in many countries.

Trump's statement followed the massacre last week of 14 people in San Bernardino, California, shot to death in a hail of bullets by a Muslim couple that the Federal Bureau of Investigation announced on Monday had been radicalized.

A Reuters-Ipsos poll last week found that 51 percent of Americans view Muslims living in the United States the same as any other community, while 14.6 percent are generally fearful.

Republicans were more likely than Democrats to support closely monitoring mosques (64 percent compared with 43 percent) or closing ones with suspected extremist ties (69 percent to 48 percent).

Related Posts
By Simran Jeet Singh
To fight racism, we need to confront religion’s racist past
By Shumaila Hemani
As a Sufi singer, I believe the sounds of world religions can cultivate compassion during COVID-19
By Tara Isabella Burton
The K-pop election
By Jim Wallis, Sandy Ovalle
Savor and strategize: The SCOTUS decision to protect DACA
By Caitlin Yoshiko Kandil
'I have to find the Mecca of my heart': Muslims grieve as hajj is drastically limited