(RNS) It took more than 2,000 years after the first Hanukkah was celebrated for a Jewish craftsman to invent the menorah bong.

But as laws against marijuana loosen around the country, the time for the menorah bong has come, said David Daily, who invented this Jewish ritual object that doubles as a vehicle for smoking pot. 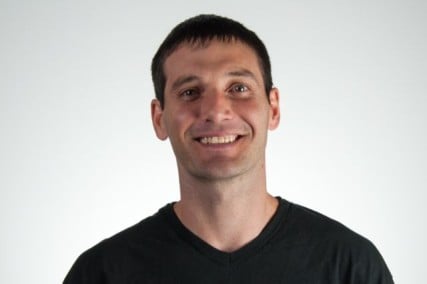 David Daily, who invented this Jewish ritual object that doubles as a vehicle for smoking pot. Photo courtesy of David Daily

A video demonstrating the menorah bong has collected more than a million hits — as in “clicks” — on Facebook in the weeks leading up to the Jewish Festival of Lights, which began on the evening of Dec. 6 this year and ends on Dec. 14. The same video on YouTube garnered several hundred thousand viewers.

“This couldn’t have happened three years ago,” said Daily, a 35-year-old Austin, Texas, businessman who made his first menorah bong for his personal use in 2012. “It is obviously a huge social movement that is allowing this to gain as much popularity as it has.”

But is it kosher to mix herb and Hanukkah?

Daily, who belongs to a Conservative synagogue and employs more than 70 people at Grav Labs, which makes pipes and other devices for smoking pot, said the bong enhances the holiday. 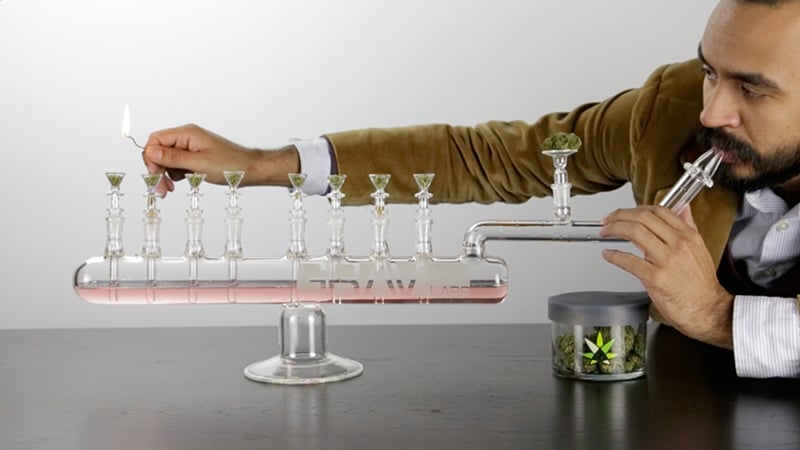 A professional glassblower, Daily unveiled the menorah bong at a Hanukkah party. “Look what I made!” he remembers telling his extended family. They lit the candles, said the traditional Hanukkah blessings, waited for the flames to extinguish and then used the menorah to smoke some weed.

The menorah bong, like a traditional menorah, holds nine candles — one for each of the eight nights of the holiday and one for the “shamash” or “helper candle” that lights the others. Hanukkah tells the story of the pious Maccabees, who, when they reclaimed the Temple in Jerusalem, around 165 B.C., found only enough oil to light the temple’s candelabra, or menorah, for one day. Miraculously, according to the Talmud, a body of rabbinic teaching, the oil lasted for eight days.

Daily, who considers himself an artist first and bong-maker second, said that despite the high demand for the menorah bong, he had to put a moratorium on production. Each takes about 10 hours to make, and Grav Labs is “slammed for the holidays.” Plus, at the current price of $700, he can’t make a profit on them. For next Hanukkah he plans to design a menorah bong that won’t take so long to produce, plus another version — “a high-end art piece” — that will cost more. 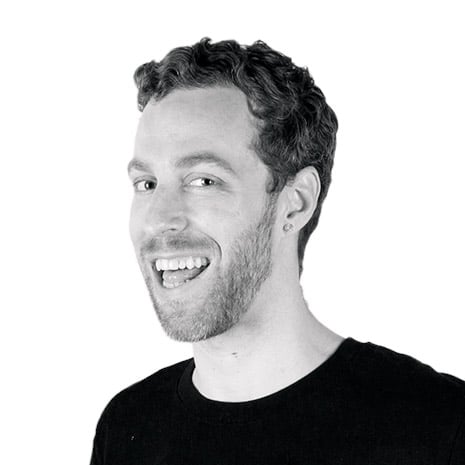 Gary Kanning, a close non-Jewish friend of Daily’s and co-founder of 420Science.com, an online head shop that distributes Grav’s products, said he was smitten with the menorah bong the first time he saw it.

Kanning co-hosts his company’s YouTube channel with Brandon Minton, who is also not Jewish but stars in the menorah bong video, demonstrating it with subtle showmanship. Next year Kanning hopes to have more menorah bongs to sell. But in the meantime, he appreciates a 40 percent spike in traffic in the past few weeks to the company website, much of which he attributes to the bong video.

The menorah bong enjoyed further attention when the Comedy Central program @Midnight, hosted by Chris Hardwick, featured it in a Nov. 18 segment with comic actor Seth Rogen, who expressed admiration for the unique piece of Judaica.

“He’s one of the more famous Jewish actors and also he’s a really big pothead,” Kanning explained. “This is on national television.”

More appreciation for the menorah bong comes from Roy Kaufmann, the co-founder of Le’Or, a Portland, Ore.- based group that aims to increase Jewish involvement in the campaign for marijuana legalization. The war on drugs has unfairly prosecuted minority groups and conflicts with Judaism’s directive to strive for social justice, Kaufmann said.

Hanukkah also celebrates freedom, so what better way to observe the holiday than “to share a bowl and talk about these issues?” Kaufmann said, adding that this should be done only in jurisdictions where partaking is legal.

Certainly many Jewish authorities frown on marijuana use and consider a menorah bong offensive. But there are others who feel more ambiguous. Rabbi Jason Miller, for example, who writes about Jews and popular culture, acknowledged that his first reaction to it was “Oy vey,” the Yiddish expression for “Oh woe.”

But on second thought, the rabbi decided it was a novel way of publicizing the miracle of the holiday.

“That is one of the core commandments of Hanukkah, after all,” he said. “The traditional part of me thinks the menorah should solely serve the purpose it was intended for, but this is pretty creative and brings a lot of attention to the ritual of Hanukkah candle-lighting.” 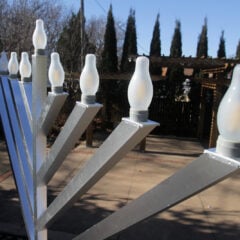