As CNN just reported, the results are in from the Mormon Gender Issues Survey, in which a team of researchers used two different questions to ask two different samples of Latter-day Saints about their views on Mormon women’s ordination.

CNN has to take an unbiased journalistic view of the results, but I am a columnist, and a Mormon feminist, so I get to state my opinion outright. And it is this:

The basic news from the survey is that there’s no news. Despite all the visibility given to the question of female LDS leadership in the last two years, there’s been virtually no improvement in the very low number of Mormons who support women’s ordination. Here are five findings from the study. Fewer than 10% of Mormons answered yes to the question “Do you, personally, believe that women who are
dedicated members of the Church should have the opportunity to be ordained to the priesthood?”

1. The majority of active Mormons still don’t want women to have the priesthood.

When this survey was created, it was with the idea that the statistics on Mormon views might have changed markedly since the 2011 Pew survey that everyone keeps holding up as the gold standard. Had LDS views on women’s ordination softened as much as, say, their views on homosexuality? (See here for recent data on the sharp increase of Mormons who now say “homosexuality should be accepted by society”).

The results on women’s ordination, however, are much the same as before, at least among the most active Mormons (see #5 below).

In prior surveys, the percentage of Mormons who said yes to the “neutral ordination question” was close to ten percent; lo and behold, it really hasn’t budged. The first sample this time around had overall support at 9.9%, and the second just 8.4%.

“I was surprised at just how little support there is among active members for female ordination,” says Brent Beal, a professor at the University of Texas at Tyler, who is part of the team that created the survey. 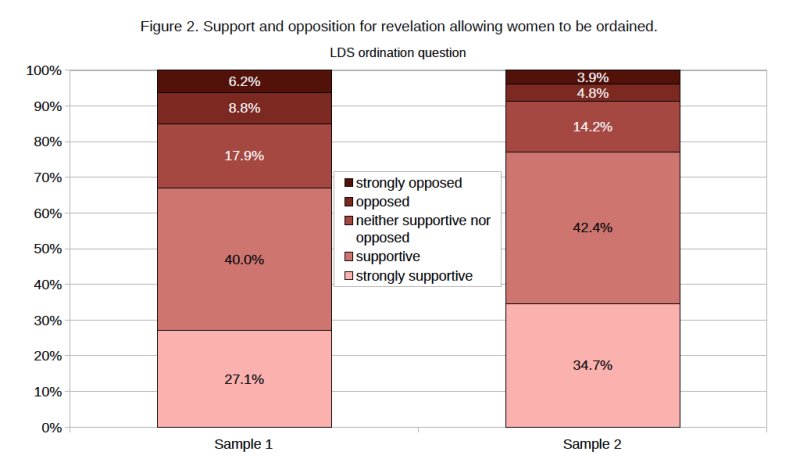 More than 67% of group 1, and 77% of group 2, said they would be supportive or strongly supportive of women’s ordination “if the First Presidency and the Quorum of the Twelve Apostles were to receive a revelation allowing women to hold the priesthood.”

2. However, most of those opposed would change their mind if the prophet announced that women should be ordained.

“One of the problems with asking that question the way that Pew and other surveys have asked it is that you’re basically asking members to openly disagree with existing church policy,” says Beal. “That member is fully aware that women’s ordination in the church is currently prohibited. So it becomes very difficult to figure out how they would feel on their own without that policy overlay. When you ask it the other way, if this were implemented from the top down, you get rid of this resistance.”

The new question was worded: “If the First Presidency and the Quorum of the Twelve Apostles were to receive a revelation allowing women to hold the priesthood, I would be…”

And eureka! Whereas we were looking at single-digit numbers for the first question, the second question had more than 67% of Mormons in Group 1 saying they were either “supportive” or “strongly supportive,” a whopping 77% in Group 2.

This about-face is most apparent with the people who were strongly opposed to the first question—confirming the idea that the most devout will just follow church policy, whatever that happens to be.

3. Women are more likely than men to oppose women’s ordination.

We’ve seen this finding before, most sharply in the book American Grace (see here for a previous post on how the gender divide affects Mormons’ views on female ordination). The new survey results are less pronounced than the earlier one: basically, about 12% of men and 7 to 8.8% of women support that first “neutral ordination question.” (Remember that there are two sample groups, and they got slightly different results.)

Additional research will dig deeper into the reasons for this gender divide, drawing on qualitative data from the more than 5,000 single-spaced pages of text that participants wrote explaining their views.

4. Younger Mormons are slightly more likely to support it, but not by a significant margin.

“The numbers do trend, but not that much,” says Beal.

One thing that’s new in this study is the category of “other” for gender. And among people who self-identify as transgender, support for women’s ordination was much higher.

5. The biggest factor predicting support or opposition was a respondent’s level of church activity.

The more active you are, the more likely you are to oppose women’s ordination in the absence of an imprimatur from the Twelve.

And that leads to a major problem with the study: active Mormons are noticeably overrepresented here, which may be skewing all the results to a more conservative direction. “If we’re talking about 15-plus million members of the church, then we have way oversampled on the active side,” says Beal.

The problem is that it’s really hard to get to those 4 or 5 million members who are technically still on the rolls who aren’t really connected with the church at all anymore. Many of them live overseas, and the survey was in English; it’s really tough to reach them for a survey.

“Meanwhile, everybody in Utah that’s on the Internet wanted to answer,” Beal explains: whereas active Mormons who live in Utah represent 7 to 8% of overall church membership, they represent more than 28% of the people in this study.

How many Mormons seek an expanded role for women?