(RNS) Before his death a few years ago, Jim Underdown’s father, James, requested that he be cremated — becoming the first in his family to do so. A month later, the family had a memorial luncheon in Chicago. In accordance with his wishes, his cremated remains were scattered in a favorite wooded area in Wisconsin.

The decision to forgo traditional burial was in line with his father’s rejection of religion, Jim Underdown said. “He certainly didn’t want any churchiness surrounding his death.”

Choosing cremation is becoming more common every year in the United States, largely for similar reasons. According to estimates by the funeral industry’s main trade group, 2015 is on track to be the year that cremation surpasses burial for the first time, as a long-standing trend continues. A key factor driving this: decreased religiosity.

READ: Green burials reflect a shift to care for the body and soul 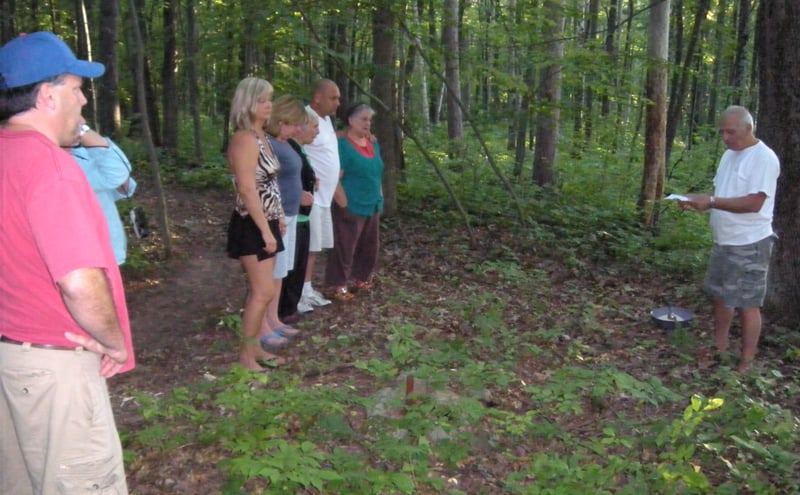 Friends and family gather in a wooded area in northeast Wisconsin to scatter the cremated remains of James Underdown, in 2009. Photo by Jim Underdown

“A surge in the number of Americans that no longer identify with any religion has contributed to the decline of the historically traditional funeral in America — and the rise in cremation as the disposition of choice,” says the National Funeral Directors Association in its latest annual report.

For the past few years, the association has conducted surveys asking Americans 40 and older to rank the importance of including a religious component in the funeral for a loved one. The percentage of people responding that it is “not at all important” has more than doubled in the last three years, from 10 percent to 21 percent.

A separate survey is conducted every five years by the Funeral and Memorial Information Council, a trade group representing several associations in the death care industry, including the NFDA. In the most recent study, in 2015, 91 percent of nonreligious respondents said they would be “definitely” or “somewhat likely” to consider cremation for a friend or family member.

According to data from the Cremation Association of North America, cremation percentages correlate with regional variations in religiosity. For example, in less religious Oregon, 73 percent of burials involve cremation; in more religious Mississippi, cremations make up just under 18 percent.

READ: Cremation is popular, but is it green?

To be sure, burial need not incorporate a religious ceremony. So why is it then that the nonreligious are increasingly drawn to cremation? Barbara Kemmis, executive director of CANA, said that overall, cost is the reason cited most often in that group’s consumer surveys.

But there are other considerations, particularly the flexibility to have a memorial ceremony after some time has passed, with practically limitless options for venue — she even hears the term “destination funerals” being used. Underdown says the month between his father’s death and the memorial service not only gave his family time to plan, but also allowed more notice for other people from all over the country to attend.

Citing the Funeral and Memorial Information Council’s data, Kemmis said her sense is that nonreligious people are also more likely to incorporate nontraditional rituals, such as releasing doves or helium-filled balloons, “different things that are unique and personal,” she said.

Underdown said his father also “had no feeling of belonging in a place where ‘one’s own kind’ would be resting nearby for all time — like a Catholic or Jewish cemetery. He knew that once he was dead, it didn’t really matter what happened to his body because he would not be able to experience anything anyway.”

Numbers are less definitive on other nontraditional options, such as body donation for medical research; NFDA figures show a slight increase nationwide, from 6.3 percent to 6.9 percent in the past decade. But Kemmis said her research had shown body donation percentages in California and in Arizona, where it’s tracked by state agencies, is “well into the double digits.”

Kemmis believes cremation is “becoming the new tradition in the United States,” for the religious as well as the nonreligious. For the nonreligious, cremation can be a way to create a more individualized memorial service.

But even for religious families, it can be seamlessly incorporated into centuries-old traditions. Kemmis illustrates the point by paraphrasing what a traditional funeral home outside of Boston that serves predominantly Catholic families told her:

(Simon Davis is a contributor to RNS)

This video was produced previously for RNS and is published here.