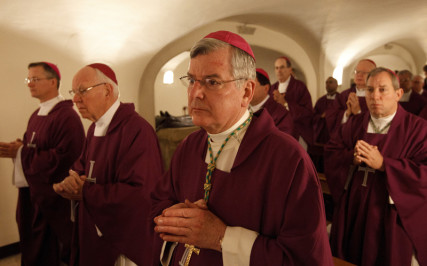 Former Archbishop John C. Nienstedt of St. Paul and Minneapolis, center, and other bishops from Minnesota, North Dakota and South Dakota concelebrate Mass at the Altar of the Tomb in the crypt of St. Peter’s Basilica at the Vatican on March 9. Nienstedt resigned in June 2015 after a series of scandals. Photo by Paul Haring, courtesy of Catholic News Service

MINNEAPOLIS (Reuters) The Catholic Archdiocese of St. Paul and Minneapolis has settled a civil lawsuit brought against it by a county prosecutor over the alleged failure to protect minors from sex abuse by clergy, according to church officials and the county attorney.

A criminal case brought by the Ramsey County Attorney’s Office against the archdiocese in June along with the civil complaint remains pending in county court, prosecutors said Friday (Dec. 18).

Days after the complaints were filed, Pope Francis accepted the resignations of Archbishop John Nienstedt, along with that of a top Nienstedt aide, Auxiliary Bishop Lee Piche, in a major housecleaning of the scandal-plagued archdiocese.

Francis also appointed Archbishop Bernard Hebda as the interim leader until a permanent replacement is found.

The archdiocese, which covers a large part of the Minneapolis and St. Paul metropolitan area, filed for bankruptcy in January and the settlement requires U.S. Bankruptcy Court approval.

The civil complaint and criminal charges were the latest development in the child sex abuse scandal involving the Catholic Church in many U.S. cities.

Ramsey County Attorney John Choi said the settlement’s objective was to make the archdiocese vigilant about ensuring that children will no longer be victims of sex abuse by clergy.

“Today’s historic agreement increases oversight and transparency to systemically change how the archdiocese protects children and responds to suspected incidents of child sexual abuse,” Choi said in a statement.

The agreement outlines plans for protocols when dealing with reports of misconduct by clergy, including which ones would be handled by the archbishop or a review board. It also spells out that the archdiocese would not interfere with law enforcement investigations after mandatory reports of child sexual abuse.

Audits will be conducted in 2017 and 2018 to ensure compliance with the settlement, which includes many changes the archdiocese agreed to in a 2014 settlement with attorneys who represent victims of child sex abuse by clergy in civil cases.

“This settlement agreement is an opportunity for us to do all we can to make sure children are as safe as possible now and into the future,” Hebda said in a statement.

Hebda said the archdiocese is already doing much of what is in the settlement and other parts of the agreement are working in some dioceses around the United States.

Prosecutors in June accused the archdiocese of failing to protect children from a priest who pleaded guilty in 2012 to sexual abuse, describing a decades-long “disturbing institutional and systemic pattern of behavior.”

The multiple misdemeanor charges related to three child sexual abuse victims and named only the archdiocese as a defendant, limiting possible penalties to fines.